One of Retro Studios' other early projects was a football title. The game never really had a uniform title/name, but for the purpose of this article, we are going to refer to it as, "Retro NFL Football." We have attempted to get in contact with more people involved with this game, we were largely unsuccessful. Luckily Jason Hughes was kind enough to provide us with a detailed account of the ups and downs of the project.

"The early stages of development began in the summer of 1999," recalls Jason Hughes, senior programmer on the project. "I was assigned as the temporary lead programmer and worked to lay out the overall structure of the code base and do AI research into the most appropriate techniques to apply to each aspect of the game. Full development really started almost six months later, in mid-2000, as the design began to gel and personnel were assigned to the project."

One artist assigned to the project in October 2000 was a woman by the name of Vanessa Gonwick, whom also worked on Raven Blade for a short period. "While at Retro Studios, I worked on a football game for the GameCube," states Ms. Gonwick on her personal website. "I focused primarily on character modeling and setting up morph targets for facial animation. Closer to the end of the project I spent a few months doing some character animation." 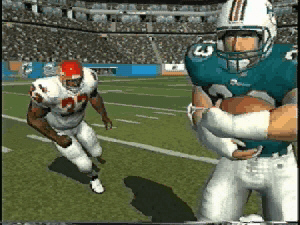 Vanessa continues, "When I started on NFL [Football] I spent most of my time optimizing the character models to reduce polygon count as well as improve the overall appearance and set up the face geometry to incorporate facial animation capabilities. The art director wanted a system set up for "create a character" mode, enabling the player to customize their character with various equipment styles. This render was done to show Nintendo the range of equipment styles we could produce using geometry partitions and texture switches. There were eight different football player models in total and they were created in [a 3D modeling program called] Maya."

Another team member connected to the project (who requested to remain anonymous) recalls how the team used Retro's motion capture data with NURBS (Non-Uniform Rational Bezier Spline), which are mathematical representations of 3D objects using Bezier curves opposed to polygons, to figure out how to get the best possible performance out of their models. "We did a fair amount of experimentation at the outset, trying to determine the optimal way to build both our game models and our texture/ cinematic models. Also, and forgive me, this is going back a ways, I seem to recall that we were actually going to be applying our motion capture data to NURBS models and then outputting it from there to a proprietary animation format that the engine would use on the polygon models - but again, don't hold me to that aspect. In any case, we built a lot of versions to see which would work best for our needs. But I am fairly certain that the NURBS system had something to do with the motion capture data."

Speaking of motion capture data, did we forget to mention that Retro NFL Football was one of the first games to take advantage of Retro Studios half-million dollar motion capture studio? For this project, Retro called in the professionals to assist in seizing the most realistic athletic performances possible. "We spent a lot of time in the motion capture studio, and brought in several players from the Dallas Cowboys for shoots; we also spent ten days with four professional stuntmen from LA doing big hits, flips, the kind of stuff we wouldn't have our real players do. And with all the [motion capture] shoots came a lot of cleanup work," cites our source.

In addition to Vanessa Gonwick and Jason Hughes, as many as 30 members worked on Retro NFL Football at its peak. "Well, we had five different producers at different times," says Jason. "We had a handful of very experienced designers and programmers from competing franchises, most of whom are leading football or sports development elsewhere today. We had several amazingly talented artists with backgrounds in everything from motion capture to television style production. I'm sorry, but out of respect for their privacy I won't give names, but it was one heck of a team."

"My specialization was artificial intelligence and game architecture," describes Jason. "While other programmers were working on the graphics engine and collision detection system, I was implementing the artificial intelligence and building the infrastructure for how different pieces of the game fit together. The infrastructure for most games is a minimal task, but when considering a simulation style sports franchise tends to release a new product every year, it's very important to think well into the future so that new features are a snap to implement." explains Jason. "For what it's worth, artificial intelligence seems like magic, but it's really just a bunch of logical rules that allow it to make good decisions, which give the computer the appearance of intelligence. This might involve anything from selecting a good play to run, or which players to throw the football to, to exactly when to throw a stiff arm or pull a juke move."

One fact that many gamers, including myself, will find amazing is that Retro's designers originally wanted to create a Mario Football title instead. "Most of us were dying to use Nintendo's intellectual property to make a Mario Football game, and target a younger audience with a really fun arcade football game," Jason reveals. "Nintendo's business plan was to attempt to capture the mature audience with the GameCube, so they wanted a realistic simulation game with licensed teams and players. We planned on licensing NFL, though I have no idea whether that happened. Programmers aren't usually involved in licensing and legal issues of game development." 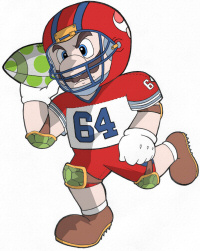 It's such a shame that Retro wasn't able to convince Nintendo to allow them the use of the Mario license. After seeing and playing Mario Power Tennis, the thought of playing a decent Mario football title, or any Mario sports title for that matter, has grown by leaps and bounds.

What is even more shocking than the revelation that Retro NFL Football could have been "Mario Kick-off Football," is the fact that the game was cancelled despite being further along in the development cycle than most other projects at Retro. "Some aspects were well advanced, while others had barely begun. For instance, we had networking support, a full replay system, a fast stadium renderer, but almost no collision detection, on-field AI was under constant revision, and the animation system was not fully functional," explains Jason. "A simulation-style football game takes years of development by a seasoned team to be a competent game, whereas even two weeks prior to cancellation, we were still hiring personnel. With more time and resources, it would have been a good offering. However the numbers didn't make sense to spend another year developing a title that might not have resonated with the typically younger demographic that Nintendo attracts."

In February 2001, the team working on Retro NFL Football was officially dissolved and production halted indefinitely. Although it was originally categorized as a launch title for the GameCube, the game's insufficient progress was only one factor that was instrumental in the termination of the project.

"The nice way to put it is we missed the market window for an NFL football title. The not-so-nice way is that the GameCube was originally planned to ship at the start of football season, but was pushed back to several months after the start of football season," describes Jason. "A new flagship football launch title would have a hard time capturing the core NFL audience at that time of year on a new console. Many other factors weighed in, though. Initially, we were developing the exclusive simulation football title for the GameCube, to compete directly with Madden on other consoles. After a year of development, Nintendo and EA agreed to port Madden to the GameCube. Shortly thereafter, Sega pledged their NFL offering as well. Our niche became quickly crowded with able competitors, and it was apparent that we had to truly stand out. The design began to drift toward a semi-serious football title with some toned down Blitz-like animation. It's also true that some of the technical development came along more slowly than anticipated, and friction between the team and management was present."

As mentioned above, shortly after the announcement that Sega and Electronic Arts would provide their football offerings to Nintendo, the decision was made to completely redesign the title in hopes of better competing against Madden and NFL2k. "… months and months of work would be discarded and we would begin all over again - with no real guidelines for what would be done differently, no plans to change the design staff, and no indication that anything would be done to convince Nintendo that our game would be viable right there with Madden and NFL2K," describes an anonymous former team member.

The former team member was also kind enough to shed more light on the management frictions with the team. "We had brought in a couple of designers from other well-known football projects, and frankly what we were seeing from them was quite sub-par. We were building a game that was going to come out in two years with the release of the GameCube, and they were designing a game that was less robust than last year's already-released titles." He continues by stating that interest in game design, as well as "flair" and "uniqueness," began to disintegrate with the designers. This became such a problem towards the end of the project, that management's concerns became vocal.

It has been speculated that Nintendo pressured Retro to cease development on the title. According to Jason, "Cutting the project was a business decision, and Retro Studios was an independent first party developer. Speculation about whether Nintendo forced their hand directly or indirectly isn't a subject I would want to discuss."