HAL was originally very business orientated; it was capable of publishing and marketing its own games in Japan and America. HAL America was its publishing arm for the North American market. The company was located in Oregon and published games under the slogan "The Funatic Specialists." Despite HAL's independence, it would still occasionally partner with other publishers for game software including Seikaromox, Sony and sure enough, Nintendo.

"Perhaps the biggest moment in the history of HAL came when we heard the rumor that Nintendo was developing a machine capable of incredible new graphics: The Famicom, or NES, as it was called here in the States," recalls Satoru Iwata. "We knew that this machine was for us. So we used every contact we could to get a meeting with Nintendo, sure that one of our ideas would become an instant hit. Yes, Nintendo did hire us, but not to amaze the world with one of our projects. Instead, they told us to fix one of their projects, a game that had fallen seriously behind schedule. Instead of creating a game, we repaired a game, and it was eventually released as NES Pinball."

After NES Pinball, Nintendo and HAL Labs started collaborating on additional projects in the form of Kirby and Earthbound (Mother 2 in Japan).

"Well, our work was satisfactory enough that we formed a close association with Nintendo. And as HAL invented a couple of early franchises, we also learned other lessons. Our first Kirby game taught us the value of teamwork. Since not everybody can be a Miyamoto, we discovered that ideas can come from several team members, building on each other, to make something superior to what one person could invent. Then we worked with the famous Japanese creator Shigesato Itoi, who was already an avid gamer himself, to develop his first idea for a game. That series, called Mother in Japan and released in America as Earthbound, proved to us that ideas take on a special appeal when they become interactive."

After the intial collaboration with Nintendo on NES Pinball in 1984, the relationship continued into April 1992 with the landmark release of Kirby's Dream Land for the original Game Boy. 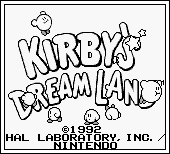 On a tiny star somewhere far, far away, there is a mystical place known as Dream Land. The Dream Landers were a very happy people who used their magical sparkling stars to play and work among the heavens. Then, one dark night the gluttonous King DeDeDe and his rotten band of thieves swooped down from neighboring Mt. DeDeDe and stole all the Dream Landers' food and trasured Sparkling Stars. The Dream Landers began to starve since they no longer had the help of the Sparkling Stars to gather food. Suddenly a spry little boy named Kirby happened along. "Don't worry, I'll get your food and your Sparkling Stars back," he said and set off on his quest toward the dreaded Mt. DeDeDe. It was a standard, perhaps generic story for its time, however it was the game's gameplay that made Kirby so unique. Kirby could inhale enemies and items to utilize special abilities or spit them out to perform an aerial attack. Meanwhile, consuming air allowed Kirby's lighter than air attitude to fly through the skies for a short period of time.

Yamauchi and Nintendo were thoroughly impressed with the Kirby game as well as the talent at HAL. So much so that HAL immediately got to work on Kirby's Adventure, a version for the NES home console. HAL appeared to be doing exceptionally well. With its growing success, the company decided to expand its development studio with the construction of a brand new building to house its operations.

Suddenly HAL was struck with over 5 billion yen (about $45 million) in debt. Unfortunately, the publishing/marketing/distribution business is a tumultuous industry to be in and HAL didn't expect things to go bad so quickly. Games HAL had expected to sell moderately, sold far below expectations. The main reason for the debt however, was its own expansion efforts. HAL had just completed construction of a new state-of-the-art building in Yamanashi in April, 1991.

HAL had run out of financing for both its games and its games studios. HAL was faced with no other choice but to approach Nintendo president Hiroshi Yamauchi in desperate need of help on June 22, 1992. Shortly thereafter, Nintendo announced it would support and fund the company so that HAL would continue to develop games exclusively for Nintendo. Nintendo held out its hand to HAL, lifting the company out of a black hole. From then on, the two companies' futures -- the smiles and the frowns -- would be one experienced side by side.

This partnership also alleviated the burdensome need for HAL to publish and market its titles in the worldwide market. Nintendo was far more successful in that area and would thus publish all future HAL titles. Yamauchi believed in the magic at HAL. He said at the time, "Here's a group of talented people, who've melded perfectly together; this group excels in the ability to create innovative software." HAL's relationship with Nintendo would continue to blossom throughout the years that followed. Since then, HAL has lavished in the funding, marketing, and resources of Nintendo Co., Ltd. and helps Nintendo live up to its quality software mantra.

(A) Viewing Room of Mt. Fuji