HAL would not remain the same. It couldn't. Nintendo's involvement would mean change at HAL to, of course, prevent such an almost dooming situation from occuring again. To lead this change was a young man named Satoru Iwata. Iwata was immediately inaugurated as the new president and the reconstruction phase of HAL followed.

One thing that stands out that Mr. Iwata put into effect, was to change the personal rating system into a performance-based system. Each March, the management would examine the individual employees to gauge their potential capability compared to their actual completed work. It proved to be a success.

Soon after HAL Laboratory virtually went bust in 1992, Iwata was appointed president of the company and through the years that followed, he would bring the company back to its former glory. Iwata's presidency lasted around seven years, between 1993 and 2000. Satoru Iwata's willingness to make decisive moves to save the company not only revived HAL but also nabbed the interest of Nintendo president Hiroshi Yamauchi. As it would turn out, Iwata's time at HAL was being closely watched and his success with that business would ultimately lead him down a highly influential path at NCL.

After an additional Kirby release on the Game Boy in 1993, HAL began work on its first original title under Nintendo. The title was to be developed for the Super Nintendo in collaboration with the scenario writers and artists, including Shigesato Itoi, at Ape Inc.

Earthbound was born from the refreshing mind of Shigesato Itoi and his colleagues at Ape Inc. Most RPGs at the time depicted knights and warriors. The Mother series on the other hand, took a more lighthearted approach and was set in a suburban town in the 1980s. Enemies consisted of aliens, possesed cars, and hippies. Instead of swords and shields, weapons consisted of a Yo-yo and a frying pan. The game became very popular in Japan and merchandise for the game was produced, including shirts, handbooks, and even a fully-orchestrated and performed soundtrack (check out starmen.net for more info on the series). 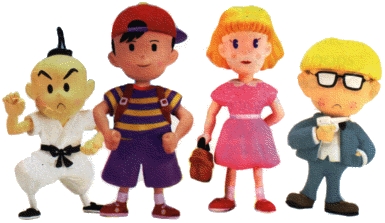 With development of Super Nintendo software winding down, the next generation of ideas and concepts was upon HAL. Unfortunately, as many developers found out, they were not ready for the costs of arduous Nintendo 64 development cycles. HAL's Tokyo studio was creating, unsuccessfuly for the most part, a curious video game for the Nintendo 64 called Jack and the Beanstalk (also known as Jack and Bean). Although this game was never realized, many of its basic ideas and innovations would make it into future HAL and Nintendo software. The first title that utilized Jack and Bean's ideas was Pokemon Snap. Furthermore, the ideas in Jack and Bean were planned for Earthbound 64, which was to take advantage of the Nintendo 64 Disk Drive (64DD), but of which was ultimately never released. A few of Jack and Bean's concepts were also eventually utlized in Nintendo's The Legend of Zelda: Majora's Mask.

Beyond Jack & Bean, HAL had a variety of innovative titles in development for the Nintendo 64. One was a 3D adaptation of Kirby's Dream Course, a golf-like Marble Madness game for the Super Nintendo. Alongside Jack & Bean, it was one of the very first Nintendo 64 titles in development and had it released on schedule, would have also been the first to utilize and feature four-player multiplayer gaming. The title originally debuted to the public alongside the Nintendo 64 at the 1995 Space World show in Japan. Kirby Bowl 64 and Super Mario 64 were the only playable Nintendo 64 titles at the show and did a remarkable job of demonstrating the graphical power of the Nintendo 64 console. One of the especially neat features of the game was that it displayed randomly generated levels. About a year later, the game evolved into Kirby AirRide. Besides a significant enhancement in graphics, with a vivid palette of colors and shapes, the title now had Kirby riding a star and racing frantically through levels. Unfortunately, due to the 64's limited technology, the four-player mode was never successfuly created with a decent frame rate. As such, Kirby AirRide on the Nintendo 64 was never born (it wouldn't see release until five years later on the Nintendo GameCube).

Another project HAL had in the oven was a sequel to the quirky role-playing game Mother (or Earthbound as it's called in America). Once again HAL partnered with scenario writer Shigesato Itoi to create Mother 3 (Earthbound 64). The title was to take advantage of the Nintendo 64DD perhipheral, its enhanced graphics and especially its internal clock. For example, players were said to be able to plant a seed and come back a week later to find it had grown into a vine in which players could climb to access a previously unreachable ledge. The story of Mother 3 was said to begin somewhere after Mother 2 left off and would span over 10 years through multiple worlds consisting of fantasy, medieval and science fiction. When the game was cancelled in 2000, Nintendo said that the game was between 30 to 60 percent complete. The game's development was terminated mainly due to funding...six years too long. The decision was partly Shigeru Miyamoto's but ultimately Satoru Iwata's, who was producer on the game. It was of course a decision neither of them wanted to make as they saw just how much people, both the developers and the fans, cared for the game. But as things go, Nintendo wanted to direct its precious resources to developing software for the impending next-generation releases of the Nintendo GameCube and Game Boy Advance.

Although HAL was absent for much of the Nintendo 64's life, it would prove to be one of its biggest supporters in 1999 and 2000. One of the 64's smash hits in 1998, and coincidentally HAL's first release for the Nintendo 64, came in the form of Pokemon Stadium. HAL followed this success with the release of Super Smash Bros. in January 1999. Of all Nintendo 64 titles released in Japan, Super Smash Bros. became the third best-selling title while Pokemon Stadium ranked in at the fifth best-selling game. By the end of the Nintendo 64's life, both games had each sold over three million units worldwide. These pieces of software proved that HAL simply needed to get a grip on the complicated 64 hardware.

As mentioned before, HAL had an intimate relationship with the Pokemon guys, no doubt largely due to the fact that HAL's Tokyo studio was housed within the same building. This meant that HAL had a very close involvement in the worldwide proliferation of the Pokemon franchise. Arriving on the Nintendo 64 in March was Pokemon Snap, a title created by the same team that worked on Jack & Bean. Pokemon Snap is an on-rails safari adventure through various Pokmon-infested areas in which the player must take pictures of the elusive Pokmon creatures. HAL also had a hand in the subsequent Pokemon Stadium releases. HAL released the sequel Pokemon Stadium 2 in Japan during the month of April 1999. And with it, the company had yet another hit on its hands. Now that HAL had finally come to terms with the Nintendo 64 hardware, software releases were flowing from the company like sweet wine.

HAL would finally emerge from its debt and reconstruction phase in 1999. Mr. Iwata resigned from his position as president to move to a position within Nintendo and Mr. Masahito Tanimura, who was one of the first employees at HAL, was inaugurated as his successor.

Another round of releases were seen in early 2000. The first was Sim City 64 for the Nintendo 64DD. The title was licensed from Maxis and development was handled by HAL. For those unfamiliar with the game, players begin with a blank canvas and must buy land and designate it for residential, industrial or commercial use and successfully link them together with roads and power to create a healthy and productive society.

HAL's next release came in March. Kirby 64: The Crystal Shards was a highly anticipated game for the Nintendo 64. The game retained its 2D perspective while 3D environmental backgrounds gave the eye-candy Nintendo 64 gamers were demanding. Upon release however, many felt the title failed to evolve with its audience. Instead, it read and played just like a children's book. Despite the criticism, Kirby 64: The Crystal Shards sold 245,508 copies during its first week of sale and went on to become the 8th best selling Nintendo 64 game in Japan.

It was around this time that WARPSTAR Inc. was established. The company was founded through a joint investment by Nintendo (50 percent) and HAL (50 percent) in 2001 to manage the copyright and merchandising aspect of the Kirby franchise including a new animation series called "Kirby Right Back At Ya". The series debuted in North America on September 14, 2002 with 28 episodes. It became an immediate success with morning audiences and is currently approaching its 100th episode.

For a late March release, HAL again partnered with scenario writer and designer Shigesato Itoi to release the role-playing fishing game Shigesato Itoi's No. 1 Bass Fishing. Players begin the game by registering themselves as a fisherman. Initially you can't catch more than a few small fish and must trade them in for money which can then be used to purchase better fishing equipment to use. It was a moderate success in Japan. Due to the title not fitting into a specific genre and the focus quickly moving to next-generation game development, Shigesato Itoi's No. 1 Bass Fishing was never released in North America.

The Irony of Birth and Death

An interesting tidbit about the origin of where the first HAL employees came from. They met each other at a Seibu Department Store. Just as HAL faced challenges so too would the completely unconnected Seibu chain. A little irony perhaps or just a part of being a business in competitive markets.

"One of the top department store chains in Japan, the once-glamorous The Seibu Department Stores has floundered under crushing debt and Japan's economic woes," reported Yahoo.com. "In the 1970s and 1980s, the chain was among the most profitable and avant-garde in Japan, filled with French designer clothes, art exhibits, and theaters, and run by the artistic Seiji Tsutsumi, son of a Japanese tycoon. In 2003, in return for nearly $2 billion in debt forgiveness from Japanese banks, Seibu agreed to close or revamp seven of its 20-plus stores over the next five years and to cut 3,700 jobs. Seibu has merged with rival Sogo Co. (the operator of 11 stores) to form holding company Millennium Retailing, which owns the majority of Seibu."