View in legacy (desktop) mode
Cory: Are there any English voice actors that we'll recognize? How do you direct voice actors for a video game, when there are often very few visual cues to work with?
Ignition:We did not use any celebrities for Arc Rise Fantasia, per se. For the VO recording, we carefully review in advance which sounds need extra attention with timing, and during the actual recording we show cutscenes and soundwaves to actors to help them match the original Japanese recording as much as possible.
Tetsuhiro Akiyama, Ignition Japan:For certain characters, we tried to pick VO actors with voices that resembled the original Japanese version to preserve the feeling of the original game. Also, a few characters sing in the game so it's tough finding VO actors who can sing, as well.
Cory: I immediately recognized Kenichi Yoshida's character designs, having watched and loved his work on Eureka Seven. How do you ensure that an artist's work remains recognizably his own when translating it to 3D?
Ignition:It's a process that's grown increasingly easier to achieve with the advances in technology and graphic software. Not too long ago, an artist's hand drawn artwork would be translated into an 8-bit image and lose much of its charm. Nowadays, it's a close collaboration between artists, technicians and software. We're very happy with the end result in Arc Rise Fantasia. 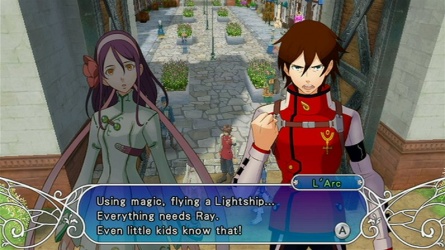 Cory: When localizing, is there an attempt to work with fonts that mesh well with the rest of the existing interface design? Do you have designers whose attention is focused on making sure changes to the HUD and text-based overlays maintain the feel of the original aesthetic?
Ignition:We used the font currently in place to maintain the feel of the original game and to match the rest of the interface. Our designers definitely take everything into consideration when localizing a game and this includes updating HUD and font style. When a player spends 60+ hours in a game—Arc Rise Fantasia can take upwards of 65 hours—choosing the right kind of Font and designing a great HUD is very important.
Matt: I don't know if you've been able to get the necessary bits and pieces together to answer this question or not, but some months ago I was really admiring the Japanese art book and was hoping you were considering bringing it here, as a pre-order bonus or something similar. Any word on that?
Ignition:It is currently to be determined for US. But stay tuned! 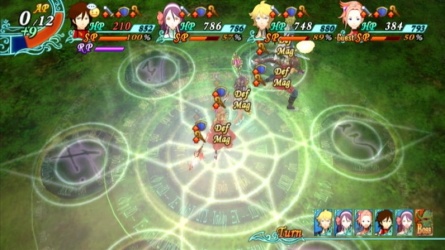 Cory: Are there any changes or enhancements that you guys have made to the game, or can we expect an experience that's identical to the Japanese, just in English? Were there any times you were tempted to make alterations, but opted instead to respect the decisions of the original creators?
Ignition:Overall, it's the same as the Japanese version. However, there are some lines we had to edit during the localization process to make sense in English. Direct translation of Japanese wordplay wouldn't make much sense in English.
Matt: Thanks again for your time. We're looking forward to finally being able to get our hands on the game this summer.
Ignition:Our pleasure! We're excited to hear what you think once Arc Rise Fantasia ships in July!
And ship in July, it does—the official release date is July 20.
view full archive