Unfortunately on October 1, 1999, Real3D was forced to close its doors and bid farewell forever. Lockheed sold off its share of Real3D to Intel on October 14th. Allegedly, Real3D had been losing significant amounts of money over the years and, at the time, Lockheed Martin was struggling in the market place and its stock value had taken a rather murderous beating the past summer. Since Lockheed was interested in salvaging its stock value, and Intel was gleaming over Real3Ds graphics technology patents, it was logical for Lockheed to drop the dead weight. Following the sale, Intel promptly fired the entire staff and closed the office for good. Many would naturally assume that the legacy would end here, but they would be wrong. One of the fortunate employees who made it out of the company at the right time, with the right connections, was Erick S. Dyke. Erick Dyke, with friends Dan OLeary and Sean Purcell, left Real3D in late 1993 early 1994 to start a new venture. All three made a conscious decision to carry the spirit of the original GE team on to a new company.

They were in Japan for two months [working on Desert Tank] and when they came back, the PlayStation (PSX) was gearing up and getting ready to launch, explains Ted Newman. [Sony was] looking to get titles from anyone they could get them from. So Erick, Dan, and Sean met with an agent out in California who used to work for Sega.

After meeting with Sonys agent, Erick, Dan, and Sean were able to secure a deal developing a title for the PlayStation launch. This was the founding of n-Space. Back when we created n-Space, all games were two dimensional (or two space) 3D games are three space, explains President Erick Dyke. In math n is any value- thus to us n-Space was unlimited to the future. 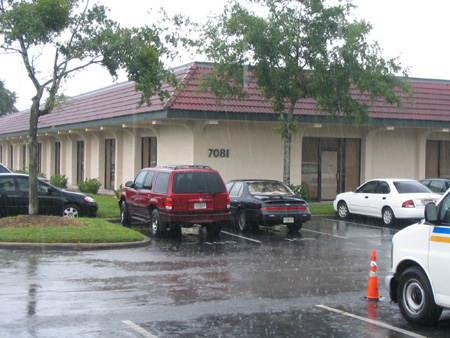 The first game n-Space was charged with developing was a title by the name of Razor Wing. The basic premise of the game placed gamers in control of a futuristic hover tank viewed from the first-person. Razor Wing was essentially a shoot-em' up action-adventure title, set in a fantasy post-apocalyptic future, featuring campaign missions against alien forces. The game was unveiled to the public at the very first E3 (1995) and showed considerable promise on Sonys new console. So much so, in fact, that Sony proudly displayed the title on the PlayStations box alongside Madden NFL 96 and Darkstalkers. Its actually on the PlayStation box, Ted New reminisces to N-Sider. There is a picture of it on the back of the box that says, coming soon. However, with Razor Wing, there was some sort of shakeup at Sony

The shakeup Ted is referring to was the merger and shuffling of several departments at Sony in the later half of 1995. When the dust had finally settled, Sony found itself with the unfortunate problem of having two titles by two separate teams that were unnervingly similar. One of these titles was Razor Wing, the other was developer Singletrac's Warhawk. The call came down to terminate one of the projects and, unfortunately, Razor Wing got the axe, even though it was barely three months shy of completion. For those confused as to how Sony had the power to cancel development of a title they were not developing internally, it has to do with the fact that Sony funded both Warhawk and Razor Wings production. Once the money stopped flowing, development stopped moving.

Though it was clearly a discouraging blow to the n-Spaces team to have their first title vanish so close to completion, they did not stand around and mope. Right on the heels of Razor Wings demise, n-Space began production on Tiger Shark. Released in September 1997 by GT Interactive, Tiger Shark puts players in control of a prototype boat-submarine hybrid, known as a subfoil, aptly named the Tiger Shark. The game is set in a not-so-distant future where the Russian army has begun tests of a geological weapon system that has already caused recent earthquakes on the eastern coast of Asia. As a result, the island nation of Japan has sunk and the Russians are hell-bent on taking over Japans flooded remains. Its up to players to make sure that they fail and to terminate the threat posed by the Russian weapon. Tiger Shark was actually pretty similar [to Razor Wing], but the big catch there was that you could drive on top of the water and drive under the water, so you had this two plane combat, explains Ted Newman. Thats a little Geist reference [laughs]. Featuring 9 primary missions, plus one training level, Tiger Shark had quite a bit to offer gamers.

However, about midway through development on Tiger Shark, n-Space started to see several key changes that would help shape the companys future for the next few years. One such change was the entrance of Ted Newman to the staff. While Tiger Shark was being developed, we got another project called Bug Riders, which was a concept that an old friend of theirs [Scott Berfield] came up with, recounts Mr. Newman. I believe he is with Microsoft now. During Tiger Shark, that is when I came onboard in 1996. Then I jumped on over to Bug Riders. I started on Bug Riders doing cinematics. Basically at that point, n-Space became a two-team company.

In 1997, each team at n-Space was comprised of roughly twelve or so individuals. After awhile, we had a little core group that separated off that did nothing but technology development for both teams, continues Mr. Newman. So, there was Bug Riders and Tiger Shark going on at once, and then the Tiger Shark team went on to do Duke Nukem: Time to Kill, and the Bug Riders team went on to do the first Rugrats game. Those are probably our most successful, popular and well-know games. I then moved on to Time to Kill as lead designer. Time to Kill was followed up by Duke Nukem: Planet of the Babes for the PlayStation. We did one more Rugrats game and then that team, which became known as the n-Kids team, went on to do three Mary-Kate & Ashley titles.

At some point along the way, the two teams eventually merged back into one core team; however, today, n-Space does have one small team working on handheld development. Though N-Sider kept trying, we were unable to get n-Space to spill the beans on their handheld development projects; however, we were able to get confirmation that n-Space does in fact have at least one Nintendo DS title in development and no Game Boy Advance titles. It is interesting to note, that n-Space was actually the development team behind the DS version of the EA Tiburon-produced GoldenEye: Rogue Agent. PSP development is still a mystery.

When N-Sider traveled to n-Spaces offices, our visit ironically took place the day after the Nintendo DS launch in North America. As soon as we walked inside, n-Space employees were PictoChatting across the office to each other and playing wireless games of Super Mario 64 DS. Below is a brief highlight from the interview:

Q: What are your impressions of the DS? Did you get ideas right away?

Ted Newman: Yeah. We were lucky enough to try it at E3. We were really excited about all the possibilities with the touch pad. Miyamoto-san was there and Dan, one of the owners, was PictoChatting with him. Im just dying to see someone do some sort of

Erick Dyke: DONT! Are you going to give out all your good ideas?!

Erick: And that wasnt even a Nintendo secret there. That was just a good idea! [laughs]

Ted: Right now, it looks like the DS is pretty easy to develop for. We got a 3D engine up and running on it very quickly and it works great. Its very slick looking.

Following the 1998 release of Bug Riders, by publisher GT Interactive, n-Space began to shift from its focus away from original intellectual properties (IPs) to licensed franchises. One of the first projects taken on by n-Space under this newly established program was the Nickelodeon Rugrats franchise, from publisher THQ. We are a company that has followed the industry and its cycle, explains Erick Dyke to N-Sider. I mean, at the launch of a new hardware platform there is a lot of opportunity to do original IP. After any hardware launches, original IP comes out first, and then it goes into license for a long time. Then it goes back to original IP, following the release of a new hardware cycle, and that is kind of what we do. Erick continues, For us, the license thing has always been fun, just because every deal we did we managed to get pretty much full control of what we were doing. It like, Heres this license; make the best game you can. It wasnt a lot of copy this movie or copy this-that. And plus, the licenses made us a lot of money which enabled us to always fund development.

So how did n-Space go about settling on what properties to take on, and what properties to pass? Well interestingly enough, with the exception of Danger Girl from THQ, publishers approached n-Space to develop all their licensed titles. In the case of Duke, it was like We have this great license for you; do you guys want to do it? We did it. In the case of Rugrats, we were going to sign another deal with that publisher to do an original game and they came to us and said, Hey, we just landed Rugrats and we need a title done within a year. Do you guys want to do it and this is what we will pay you to do it. And that title sold over 3 million units worldwide.

For Duke Nukem, GT Interactive Software CEO Ron Chaimowitz telephoned Erick to pitch the concept of creating an original Duke title. The prospect instantly intrigued the n-Space President who has passed on the opportunity to port Duke Nukem 3D to PlayStation only a few months earlier. With the two in agreement, it was now time to get 3D Realms, owners of the Duke Nukem franchise, to allow n-Space the privilege of developing it. Both Scott Miller and George Broussard, then working on Duke Nukem Forever for the PC, were interested in Mr. Chaimowitzs proposal; however, they quickly set the one ground rule: any game to be developed would have to be created exclusively for the console market in order to keep it from competing with Duke Nukem Forever. With the ground rules set, Erick took a trip to Garland, Texas to begin convincing 3D Realms to allow n-Space to develop the title. Armed with a videotape of n-Spaces office to show Miller and Broussard they were capable of taking on the task, Erick was able to quickly convince them to entrust the franchise to the Orlando studio. The fact that n-Space had extensive knowledge of the PlayStation format, something 3D Realms lacked at this time, reportedly sealed the deal.