View in legacy (desktop) mode
With the Mario and Metroid fever starting to die down the tiniest of bits, it's time to have a look at what else Nintendo's Q1 media summit had to offer. I took notes on whatever I felt looked interesting—sometimes I wrote a lot, and sometimes there were only one or two things worth mentioning. You can go ahead and read through everything in sequence, or jump ahead to whatever you feel like hearing about.

Just in case you were too inundated by Endless Ocean to notice, though, allow me to briefly re-pimp the following:


Now on with the rest:


Art Style: Rotozoa initially confounded me, but became much easier to digest once I had walked through its various in-game tutorials. At first glance it looks like a mix between flOw and Pixeljunk Eden, if you're a PSN aficionado who can identify such things, borrowing a tiny bit of gameplay from the former and a tiny bit of presentation from the latter. "You are Rotozoan," the game proudly exclaims, as it begins to detail how the 2 and 1 buttons (NES-style) rotate your body clockwise and counter-clockwise respectively. Your goal is to grow your colored tentacles by colliding them with like-colored "goobugs," extending by one link with each successful impact. Max out the length of each tentacle (specified at the beginning of any level), and you win.

You have to be careful, though, as the wrong-colored goobug will wreak havoc on the wrong-colored tentacle, stunting its growth back to the point of impact. You can take as many wrong collisions as you have green dots in your body, which can themselves be replenished by the occasional health powerup. Also floating in the primordial ether is the "cyclone" powerup, which when acquired allows you to charge a devastating spin-attack that annihilates any goobugs you manage to run into, regardless of their color, adding their numbers to each of your tentacles equally.

It would seem, however, that the game considers cyclone-use to be the easy way out. The "stage" mode, which appears to be the primary way you play through the game, counts three achievements for every level: no damage, no cyclone, and all complete. There are five levels for each Rotozoan growth level, with two, three, and four tentacles being unlocked when I picked up the controller. I opted to play the fifth level in the four-tentacle division, and beating it kicked off the unskippable credits sequence, much to the chagrin of the IGN cameraman who had just started filming. I unlocked stage one in a five tentacle division, though, so it would appear that there's more content here than initially meets the eye. That said, for what should have probably been the "hardest" of the initially available levels, that stage I played was conquered with virtually no real effort. Hopefully this was just toned down for demo purposes, lest the final game be cleared out in a mere matter of minutes.

There were a couple of other modes that might up Rotozoa's longevity, though. "Endless" mode is just like it sounds, where you see how long you can grow your Rotozoan's tentacles before he dies. This mode introduces the compression powerup, which will condense a long tentacle down to a more dense and manageable unit, so you can keep growing them without becoming impossibly unwieldy. The final mode is "snake," which introduces a one-tentacled Rotozoan with similar aims as the endless mode. Your non-tentacled side can be used to batter enemies that don't match your tentacle's color.

Rotozoa benefits from a very creative presentation, and is among the more visually engaging Art Style titles. My only concern at this point is that the experience will be too easy from start to finish. Even when I was rocking five tentacles, it wasn't that hard to keep them managed. We'll have to see whether or not it actually offers a challenge when it releases this spring.


I only played Art Style: light trax for a little bit, but it seemed to draw the vast majority of its gameplay stylings from its ancestor, Dotstream. Your line competes with others through an obstacle course, slowing with the 1 button and occasionally being able to speed up with 2. The obvious upgrade here is a radical alteration of camera perspective, with the plane you race on being presented in a bevy of different 3D varieties. Sometimes it'll be on an angle traveling into the screen, sometimes it's vertical, sometimes the track will make sudden and harsh changes in direction, and sometimes it looks like it's basically Wipeout, just with... lines instead of cars. (It's actually reminiscent of a particular mode in Wipeout HD Fury that has a similar visual style.) 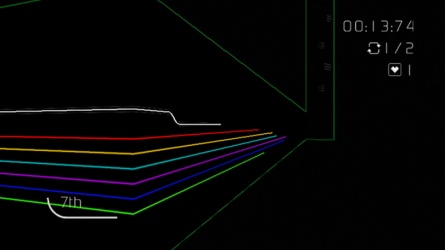 This is all a bit deceptive, though, as while the course is changing direction constantly, none of it affects how you control your line whatsoever. As far as you're concerned, everything is still a straight line. Your line will follow the exact path of any track, so you'll never have to worry about actually turning a corner, just about moving to avoid obstacles and opponents in your path. Much like previous Art Style titles, light trax seems to mainly be a visual refresh that retains the core gameplay from its Bit Generations predecessor.


I played the first two levels of Sin & Punishment: Star Successor, and my impressions are largely the same as when I played the game at last year's E3. I won't bore you with a retread, so I'll instead note a few differences that stood out. First off, Kachi's gun functions a bit differently, where it'll kind of spray wildly until you place the cursor over an enemy, at which point all of her shots will target that enemy exclusively until it either dies or you release the button and reposition her reticule elsewhere. Her entire firing scheme is based upon locking on to enemies now, rather than it just being emphasized via her special move.

I was also told by the Nintendo-rep on hand (who happened to be the individual responsible for the game's English translation) that the trophy-looking item I picked up while blasting away was one of several achievement-based point-boosting pickups on that you could acquire on each stage. These could be earned by fulfilling any number of conditions, be it destroying an entire swarm of enemies or a particular series of structures, and would be tallied at the end of the level. Each level has its own unique set, and while I can't remember the exact number, it was something around a dozen per stage. You won't be told how to earn them, though. Enterprising gamers will have to try all manner of different things in order to unearth them and boost their scores higher on the online leaderboards.

Finally, after discussing briefly the topic of localizing the game, the rep let me know that the English version of Sin & Punishment: Star Successor will include, in addition to the newly-recorded English voiceovers, the entire original Japanese voice track. Nice!
view full archive