For the longest time I could only remember the title of this game as "Kid Shit and the Magic Poop." I... I guess I just thought you guys should know that.

But really, Max & the Magic Marker was pretty interesting. The hook here is that your little dude, Max I suppose, will collect powerups that fuel the ink in the omnipresent pen that you wield via the Wii Remote's pointer. You can draw lines that turn into platforms with the A button, but it's not like they're going to float in the air and obey your every whim. Real-world physics affect your illustrations, so you'll have to make sure that ramp you just drew is anchored securely on both ends. You can even draw shapeless blobs that, based upon their mass and height, will cause varying degrees of impact when they fall to the ground—useful for crushing enemies or launching Max from catapults. 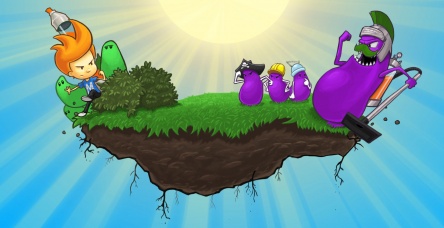 By placing your pen over an illustration and hitting B, you'll suck the ink back into the pen so you can use it at a later time. And you're gonna need that ink, since there's some misanthropic son of a bitch who pops out of the top of the screen and steals all of your ink at various waypoints, so you can never really fill your pen more than a little bit. Though to be fair, Max is pretty adept at platforming, and you only need to use the ink here and there. It's a little weird to manage, since jump is mapped to Z on the Nunchuck, but you can certainly manage. Oh, and you can freeze time by hitting A+B, which lets you draw with your pen before you unfreeze things... but I didn't really come across any situations where that was useful.

So yeah, kind of interesting. I can imagine some pretty tricky situations using these mechanics in the game proper.


So Photo Dojo was a surprise, for me. It's basically a simple fighting game where the focus is on taking photos of yourself and your friends in various poses to build yourselves into the game, complete with custom sound effects. I didn't get a chance to actually play it, but all I really want to talk about here are the voices used during Bill Trinen's demonstration of the game. 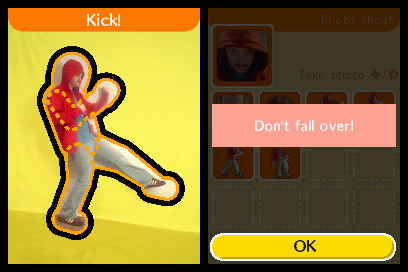 Wailing on one of the women (apparently someone else from the Treehouse) in the beat-em-up mode prompted pathetic wails of "why did you hurt me?" in a shrill and desperate tone. Bill's guy would enthusiastically roar "Bill Trinen Punch!" when performing a special move, clearly honoring Captain Falcon's famous attack from the Super Smash Bros. series. Finally, when he lost a duel to the aforementioned female character in a 1vs1 fight, her voice was modulated into a low and sinister tone as it bellowed "you've been beaten by a girl!"


Rage of the Gladiator is developer Ghostfire Games' self-proclaimed attempt to bring an uncharacteristically robust experience to WiiWare and its minute size requirements, replete with fully 3D graphics, voice acting, and MotionPlus support. It's basically a gladiatorial spin on Punch Out!!, where the emphasis is on pattern recognition across a series of 1vs1 boss battles. The MotionPlus control scheme utilizes broad strokes of the Wii Remote in cardinal directions to strike your enemy with the weapon of your choice, while the analog stick dodges upwards or to the left/right and shaking the Nunchuck either attacks with your shield or activates a special move. You can also play with the Wii Remote held NES-style, or with the Nunchuck but no MotionPlus, which reduces your available attack directions to just left and right (but apparently the up/down attacks are just for show, so you aren't necessarily missing out on much). 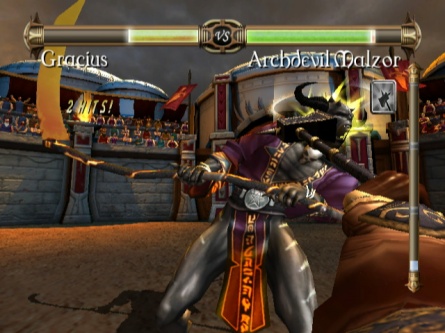 Again like Punchout!!, beating the game once will unlock a challenge mode where your opponents mix up their attacks in new and difficult-to-predict fashions. You can also acquire skill points that unlock new abilities and weapons as you play through the game's various modes. There's actually a competition being organized by the developers wherein the first gamers to complete the game 100% and send them photographical proof will receive a piece of actual real-life gladiatorial gear. I look forward to the lawsuits that are sure to ensue.


I only watched And Yet It Moves being demoed, but the concept behind it is pretty damn engaging. It's basically just a simple 2D platformer where all you can do is run and jump, but the hook is your ability to rotate the world 360 degrees in any direction by twisting the Wii Remote. So if you imagine an outcropping that curves in over your head, it's a simple matter of rotating the world 180 degrees and whoop, you're standing on the inside of it upside down, and can progress easily. 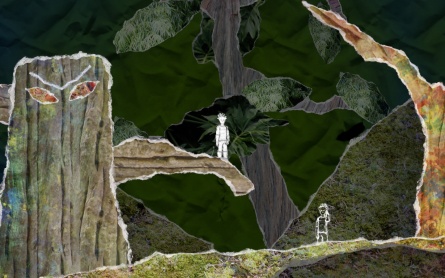 There are some obstacles where you'll have to jump and rotate periodically over several seconds to effectively emulate flight, curving reality around you in whatever path you deem fit. The danger here is that while you might only move several feet throughout the environment, your guy is actually "falling" the entire time. Spinning the world back and forth while keeping your guy in the air the entire time will increase his own "personal" fall distance, until he reaches a critical speed that will explode him on impact with any surface, even if you never really got him more than a foot away from the ground. There's actually an achievement for falling through an entire level like this, and exploding on the finish line.

I guess there's a PC version of this game where you can only rotate the world in 90-degree increments, but the analog nature of the Wii Remote's motion sensitivity encouraged the development team to explore the full range of rotational positions. The game just seems more fun than anything, offering you this unusual freedom to soar through a level in such an unorthodox fashion. Definitely worth keeping an eye on.


I'm really just more happy that this game is finally coming out in North America than anything. I was a huge fan of Picross DS, and extending that paradigm to three dimensions sounded just crazy enough to work. The demo at the show was basically just a tutorial, explaining how the new mechanics work. It's all pretty familiar stuff—you can remove squares or mark them as safe by tapping on them while holding the appropriate d-pad direction, and dragging the stylus around the screen will rotate the mass of cubes that you'll be chipping away at. Numbers on each side indicate an unbroken series of squares that you should keep, while a number with a circle around it means that there are one or more gaps in the sequence. These two rules can be combined with the knowledge of how to extrapolate Picross logic (which I won't be getting into here, but you're familiar with it already if you've ever played Picross in 2D) to yield success. 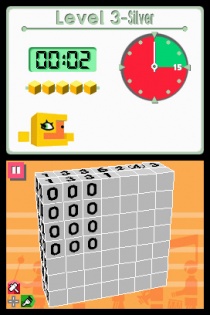 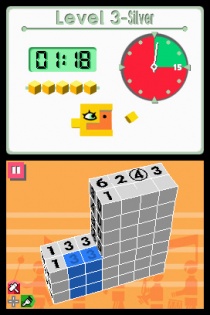 As with Picross DS, Nintendo will be supplying new puzzles periodically over the Nintendo Wi-Fi Connection, and even support the exchange of custom-designed puzzles from user to user. I'll definitely be picking this one up come March, as the DS excels as a time-filler when it's chock full o' puzzle-solvin'.
view full archive