I only saw Prince of Persia being played briefly, but I just wanted to mention what immediately jumped out at me: this can't possibly just be a port of whatever's being made on the PS3 or 360. In a Mario Galaxy-esque fashion, the pointer was being used constantly. Pointing at the ground would produce a geyser of energy that the prince could ride into the air, and pointing at walls would spawn grips for him to hang on. He seemed to hover in some kind of orb in mid-air if he jumped aimlessly into a pit, awaiting some kind of input from the player. Pointing at the edge of ledges would light them up, indicating a target for the prince to jump to. So... yeah! Some interesting stuff going on here, even if the visuals somehow seem worse than any of the GameCube Prince of Persia games. 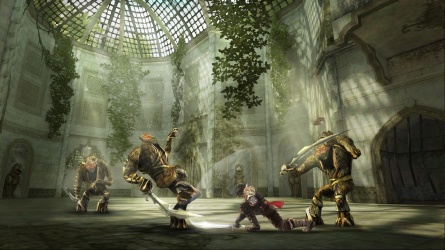 It's worth keeping an eye on if you a fan of the series, though. Don't just go for the HD versions by default, expecting them to be the same kind of experience.


I played Metal Torrent, a bullet-hell style shoot-em-up, on the DSiXL, and hot damn did it look nice. There's a 3D scrolling backdrop that looked positively delicious on those big fat screens, and the sheer number of particles and explosions at any one time was pretty stunning.

The idea here is that you wail on dudes to turn them into cubes, which when collected power your screen-clearing bomb attack. In the easy mode (which is the only one I got to play), the bomb gauge actually doubled as your health to a degree, as getting hit merely triggered a bomb. The gauge fills up pretty quickly if you keep killing guys, so you're only in danger of dying if you take four hits in rapid succession. 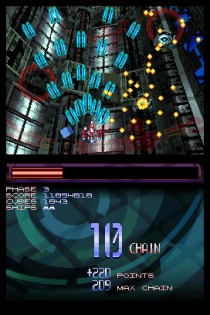 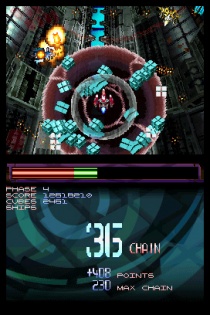 That said, it is virtually impossible to get hit. I don't know if this is just because it was on easy mode, but I simply could not find the hitbox on the ship. It's got to be a 1-pixel point somewhere in the middle, because I shit you not, I was literally covered in bullets—a solid mass of bullets obscuring 100% of my ship—and was not being hit. I'd just sit perfectly still as bullets whizzed past me, unable to find that magical killspot. Maybe the bullets themselves have hitboxes, and only their exact centers overlapping with your exact center will deal you damage. All I know is that it was very difficult to try and wrap my head around evasion when I had no idea what exactly I was trying to evade with.

But yeah, pretty much your basic SHMUP outside of that. Definitely an easier sell since it's on DSiWare, if you're an aficionado of the genre.


Capcom had a series of kiosks running Monster Hunter Tri that were networked together in... some kind of fashion, emulating the game's online experience. Or maybe they were all legitimately online. Either way, I set out on a quest with two others to take down the porcupine angler fish monster that was highlighted earlier in the day during the public demo.

The first thing I noticed was how excellent that Classic Controller Pro feels. Man oh man. I hardly play any games that require a Classic Controller, but this thing makes me want to play more of them. I've been playing a lot of PS3 games lately, though, so I was a little thrown to find that the bottom-most button was B, and thus "back/cancel," not X as on the PS3, which serves as confirm. I mean, this is how it's been since the SNES but it just goes to show how long it's been since I've really used a "traditional" Nintendo controller. 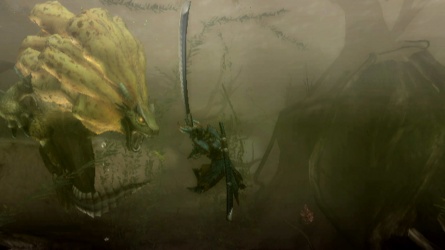 After packing my inventory with healing items, I followed another player to the location of the mission, and the cleaving began. I was initially thrown because vertical movement through water is performed by angling the camera up or down with the right analog stick, and so accustomed to inverted controls these days am I that I was spinning in confused circles, trying not to throw up. A quick trip to the options menu when nobody was looking saved the day, and I got back to heaving my mammoth sword into this poor animal's body. This is what has always kind of turned me away from Monster Hunter in the past, watching people take multiple seconds to get off any kind of attack because the swords are just so big. One of my companions seemed to be speedily chopping away with smaller and more manageable weaponry, however, so maybe I'm just always watching the wrong videos.

After being murdered for about 10-15 minutes, during which I used up literally every single health item I had brought with me and chasing this beast through various locales, we were finally victorious. I kind of wish the monsters you fought had health bars, cause I can imaging thinking you're doing great but only actually doing the tiniest amount of damage to a monster and having no idea.

In the end I'm only a little bit sure I enjoyed myself. Maybe with actual friends over WiiSpeak this could get pretty fun, but I've always been on the fence about this franchise. I should pick up the demo disk they're making available in GameStops and give it another more solid single-player go before I write it off forever. I recommend you all do the same, Wii demos are a rare commodity!


The Nintendo DSiXL is big. This is probably the first time you've heard this.

Sometimes it feels... too big. They had New Super Mario Bros. running on several units so you could compare to older versions of the hardware, and I'm surprised to say that I actually noticed the larger pixels, and they didn't look so hot. I got the same kind of impression when navigating the DSi's firmware menus. It would appear that bigger isn't always better.

That said, sometimes it definitely is. As I mentioned earlier, the Metal Torrent demo looked absolutely fabulous on the DSiXL's screens, and America's Test Kitchen was similarly delightful. It doesn't really make sense to me, but it seems like newer software looks better on the larger screens, while older software sometimes suffers.

The units I played with didn't have the fat styluses on hand, but I was able to confirm that the default slot-in stylus is indeed a little bit longer than the one that comes with the stock DSi.

In photos, it sometimes looks like the glossy cover on the XL is similar to the one on the DS lite, bringing back some of those more rounded edges, but in person it's evident that that's simply not the case. The glossy top is basically as flat as the stock DSi's top, almost being inset a bit around the edges. It's a very nice effect, if you aren't bothered by fingerprints. The unit overall though feels a little goofy. Like they made something that wasn't meant to be so big a little comically large.

I think I managed to convince myself that I don't really need the XL, but don't let me stop you from checking it out. Everyone's opinion of how important the larger screens are will be different, depending upon how they usually play their handheld systems. For me, usually crammed half on my back in a corner of the couch, my stock DSi will continue to serve me just fine.

I'm finding myself disgusted by the huge number of high-quality releases that Nintendo has scheduled for the first half of 2010. As a long-time fan, I'm not sure how to deal with such a glut. Where are the delays upon delays, the huge stretches devoid of high-profile software! (Though really I kind of hope Metroid: Other M gets delayed to iron out some of its issues.) Combined with some of the more notable PS3 releases I'm looking forward to over the next couple months, I'm basically just flat-out screwed. I barely have enough time to play the games I already own.