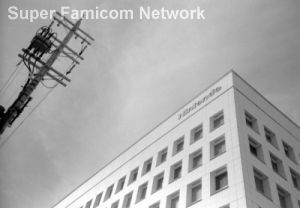 Released in Japan on April 23, 1995, the Satellaview-X (BS) was that "next step". Nintendo partnered with the Satellite Digital Audio Broadcasting Co. to provide a modem add-on for its Super Famicom system. It plugged into the bottom of the console while the modem connected up to a satellite TV Station called St. Giga. Also provided was a Super Famicom BS Cart with a slot in the top (very similar to the Super Game Boy), and a BS Memory Pak that inserted into the slot. 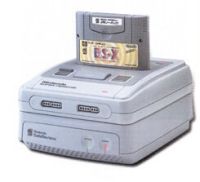 Satellite Digital Audio Broadcasting Co., Ltd. - or St. Giga for short - is a satellite TV Station in Japan that broadcasts digital music and data programs. Between 1995 and 2000 they would show television shows and broadcast music for most of the day, however in the evenings (between the hours of 4:00 PM and 7:00 PM) they would stop regular programming and allow thousands of subscribers to log in with their Satellaview-X systems. Once logged in, players could download all of the latest information, game demos, and video games. 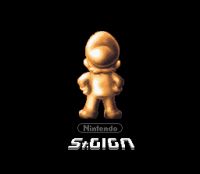 Once connected up, players would be presented with a menu screen, designed to look like a town. There would be four buildings you could visit in the town, each allowing you to perform different actions with the Satellaview system. At first there was very little you could do, but in time Nintendo planned to include downloadable magazines, newsflashes, games, and competitions.

Very often the games would not be available as a whole. Players would have to download the games on specific dates. The dates games were available to play could be found on the Newsflash board, including up and coming titles. Once you had downloaded the game you had several options. You could store the game in your BS Memory Pak or you could play for the duration of the Satellaview broadcast. 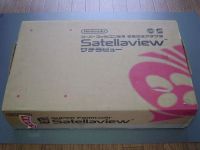 While even less is known about the Super Famicom Network - the extent of its success - it can be chalked up to yet another learning experience and an example of Nintendo's ongoing experimentation. After a list of nearly a hundred games released, the Satellaview-X service officially ended on June 30, 2000.

It's July 26, 1996, and Nintendo, Microsoft and Nomura Research Institute announce they are forming a joint venture to provide information and entertainment (infotainment) services in Japan using existing satellite television tuners.

Some speculated this related to Nintendo's plans to take its Nintendo 64 console online while others used it as a catalyst for rumours about Nintendo cooperating with Microsoft in its Internet strategy. With the latter being true, what Microsoft likely hoped to get out of the deal was a shoe-in on the market of internet service-providers in Japan after its previous internet service turned out to be a failure (just as Nintendo's Famicom Network floundered).

The three companies' initial investment in the venture totaled 1.0 billion yen (US $9 million). Nintendo would hold 40 percent and Microsoft and Nomura Research, 30 percent each. The Nomura Institute, research arm of Japan's biggest securities house, would oversee the entire system. Microsoft would provide billing services and satellite modem support. Nintendo would provide the basic "infotainment software" as well as, through one of its affiliates, a modem and satellite uplink.

"It will be possible to access information by satellite in a very easy manner," promised Nintendo's president Hiroshi Yamauchi.

In 1996, online services in Japan were most frequently accessed only after 11 PM local time when phone rates became cheaper. To avoid the national telephone monopoly NTT (Nippon Telegraph and Telephone Corp.) and its high rates, the Nintendo joint venture would be made available via satellite, St. Giga - the same one used for its Super Famicom network. The choice of satellite delivery was motivated by the fact that 10 million Japanese homes were already equipped with satellite TV dishes. Furthermore, this allowed the companies to bypass high-priced phone communications thereby making the service financially more attractive.

One of the initial problems the venture ran into was that none of the existing satellites was able to provide bi-directional services for online services. This forced users to still have to use a modem and a telephone line for the back channel that would then be routed via Microsoft's MSN online computer network.

Microsoft assured subscribers would also be given access to the MSN service. For a small monthly subscription fee of about 1,000 yen (US $9), users would get access to the Nintendo-Nomura-Microsoft infotainment services as well as the MSN network. Bill Gates said unsurprisingly, "If I spoke Japanese, I would want to subscribe to it myself."

The venture was scheduled to set up in the fourth quarter of 1996, with services beginning in mid-1997.

This was all happening around the time Microsoft partnered with NBC in North America to offer MSNBC Interactive and MSNBC, respectively described as an online "news-on-demand" service available on the Microsoft Network and an all-news cable TV channel. The two companies set up the deal in 1995 and promised to invest $200 million each over 5 years. MSNBC was created to compete directly with CNN, the cable news channel of the US media giant Turner Broadcasting, which was also planning to launch a news-on demand service.

Meanwhile, the Dutch and Japanese electronics giant - respectively Philips and Sony - unveiled plans to market a set-top box in the USA that would provide Internet access via the TV set. The device, which would connect between a TV set and a phone line, would use software produced by WebTV Networks.

These series of moves marked a further step towards the vertical integration between distributors and producers in the worldwide audiovisual industry. While Nintendo's motives were never explicitly discussed, the company was also likely looking to supply its games directly from Nintendo in-house developers to customer's televisions.

Nothing was said on the partnership between Microsoft, Nomura, and Nintendo for nearly two years. Then on January 29, 1998, Nintendo and semiconductor manufacturer Kyocera Corp. announced they had applied for a government license to provide a digital satellite-broadcasting channel by the year 2000. The partnership with Nomura and Microsoft was officially off.

According to the project's outline, programming for the new venture would include cultural and entertainment works from the western Japan region as well as game information for Nintendo products. The new service would broadcast music programming and be financed by advertising, and therefore available free of charge. Nintendo president Hiroshi Yamauchi felt this was the future. He told a news conference that he believes "both the format and quality of broadcasting" to change dramatically by 2000.

On August 24, 1998, the deal between Kyocera and Nintendo was called off. What made the deal go sour? The details are not known but apparently Satellite Digital Audio Broadcasting Co. expressed opposition to restructuring plans.

"This Christmas, we will be offering an attachment called N64DD (Dynamic Drive), which will allow users to replace the original characters in their games with new ones via modems and later, satellite communications. This is why we chose to continue using cartridges for our titles, instead of CD-ROM, which cannot be rewritten over."
- Hiroshi Yamauchi
former president Nintendo Co., Ltd.

While the 64DD's technology, courtesy of Alps, wasn't even considered to be cutting-edge back in 1995 when it was first announced, the unit didn't ship until December 1999. 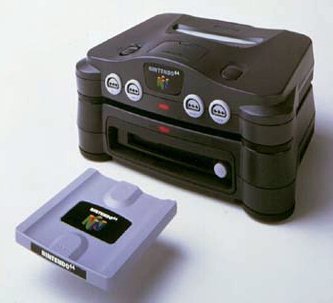 Since retailers weren't too excited about the prospect of allocating space to an inevitably dead piece of hardware - and moreover - because Nintendo didn't want to be stuck with excess inventory, Nintendo made the decision to sell the 64DD via a mail-order subscription plan. For a one-year plan costing 2,500 yen/month, customers would not only get a 64DD, but also receive unlimited access to the Randnet online service, the Modem Cartridge, the Expansion Pak, a mouse, and six DD titles, which were to be shipped to subscribers on a bi-monthly basis.

With the 64DD, Nintendo intended to throw support behind online gaming like that we saw with Sega's ill-fated Dreamcast network and also of which we now see with Sony's PlayStation 2 and Microsoft's Xbox Live. In fact, the intention of the N64DD lie squarely in playing games over the Net, with browsing being a secondary concern. Games would be downloaded, as well as expansions for accessing new levels and finally gamers could play games over the Internet.

While the 64DD never lived up to its purpose, what was released in December 1999 turned out to be a simple add-on storage device for the Nintendo 64. The 64DD fits into a conveniently located expansion slot on the underside of the Nintendo 64. The media used in the 64DD came in the form of custom disks that could each hold 64MB of data. About half of that space would be writeable, allowing for massive saves of player-designed tracks for racing games, characters for RPGs, and other player-customized or downloaded creations. Transfer rates, while not an improvement over cartridges, were still said to be around 1MB a second using a burst access system which would create equal to faster load times than that of Sony's PlayStation CD-ROM.

With the Nintendo 64 on the downhill, and sales of software reflecting its plunge, Nintendo began development of its next generation console codenamed "Dolphin". At the 1999 Electronic Entertainment Expo, Nintendo made one of its first announcements pertaining to a partnership it had entered into to effectively produce the Dolphin console. The company would collaborate with one of the largest Japanese electronic makers called Matsushita (known as Panasonic in North America). 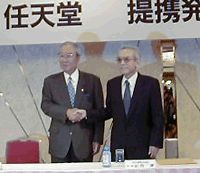 The companies announced they would pursue future applications of digital network-related products and services. In the meantime, however, the two said they would jointly develop a new digital network platform code-named x21 (you may all be a little more familiar with the name as simply "Q"). The x21 was scheduled to release in 2001.

In Japan, in the time before this announcement, Matsushita had been promoting its comprehensive Home Information Infrastructure (HII) concept as a model for the digital networking society of the 21st century. This concept entailed data sharing being done over a wide range of devices. With the addition of game entertainment and network functions to DVD-based products, the HII concept would be further enhanced with the x21 platform to include the ability to distribute and receive games, music, images and other media.

In short, Matsushita was supporting the same convergence that Microsoft and Sony are fighting for at this very moment (and Nintendo, to a lesser extent). The Dolphin (GameCube) was intended to function as a hub for Matsushita's Home Information Infrastructure (HII) system. Rival architectures, at the time, included Sony Corp's HAVi specification.

At this same E3, Sega sales vice-president Chris Gilbert, announced that Sega would launch an online network, called "The Sega Dreamcast Network". Sega had tinkered with network gaming on the Master System, however this time Sega was betting its all on online. Sega felt similarly to Nintendo in that online gaming was the future. Unlike Nintendo, however, Sega made the decision to blindly jump in the water. Sega failed to examine the water for the jagged rocks hiding just below its surface.