View in legacy (desktop) mode
Right after the intermission we had a couple of performances by Angela Aki that weren't listed on the program. First she sung the new song "Kiss Me Goodbye" from Final Fantasy XII with the backing of the whole orchestra. She also sang this song the night before, at a signing for Tower Records downtown. I attended that event and got a few things John Hancocked by Uematsu.

Her performance at the concert was much stronger though. Obviously she was holding out on Friday night for the surprise Saturday performance. After "Kiss Me Goodbye," she surprised most of the long time fans with a rendition of "Eyes on Me," the theme from Final Fantasy VIII which was originally performed by Faye Wong. This one was a little jazzier, and done with just her solo on the piano. Both songs were very enjoyable, and I believe they're also both available on the "Kiss Me Goodbye" single that Aki recently released. You should check those out. 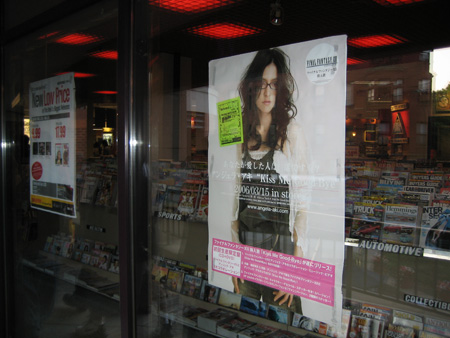 Though I can't remember for certain, there was also what Roth called the "world premiere" of the main theme from the Uematsu-composed game Blue Dragon from Sakaguchi's Mistwalker studio. It was pretty much the same theme as you can hear in the E3 trailer for the game, and very vibrant and playful.

The first program-following performance came immediately after, with a suite of music from The Elder Scrolls III: Morrowind, from Jeremy Soule (who, like most everyone else, was also in the audience). They followed that up with a surprise suite of music from The Elder Scrolls IV: Oblivion, and then announced that there were free cards in the lobby with download codes to get a full copy of the Oblivion soundtrack from DirectSong.com. As you might have previously discerned, I am not much of a PC gamer, and so I didn't recognize either of the suites. They did, however, have a very Lord of the Rings-y feel, which seemed to fit the grandiose nature of the games well.

The next song was a swing-band arrangement of the perennial Chocobo theme from the Final Fantasy series, another of the FF arrangements which is widely available on the previously mentioned orchestral albums. I assure you that although I speak of these Final Fantasy tracks with just a little trite boredom, it is only because this will have been the third time I heard many of them live, and the umpteenth time when you count in CD listening. They are remarkably entertaining arrangements, and the Chocobo one is no different. The audience reacted in a very similar manner as they did to the Super Mario Bros. medley earlier: lots of enthusiasm and cheers.

This was followed up with what I definitely considered the high-point of the night: an arrangement of four songs from Mitsuda's Chrono Trigger and Chrono Cross scores. Part of it was certainly because there really aren't any available orchestrated versions of songs from either of the Chrono games (aside from one recording of the main theme of Trigger on Orchestral Game Concert V, released in 1995), but the other part is just because the songs sound so perfect played by a full orchestra. The arrangement started off with the main theme from CT, and then went into "Time's Scar" from Chrono Cross, complete with electric guitar and Rony Barrak, who had done the percussion on the Battlefield arrangement. Barrak really made the piece perfect, throwing in a level of percussion that existed in the original track but elevating it with a lot more technical notes and fills. From there, we went into a fan-pleasing short snippet of "Frog's Theme," which sounded incomprehensibly majestic, and then marched into Trigger's "To Far Away Times," an absolutely gorgeous rendition of the ending theme which capped the whole suite excellently. The worst thing about this song is that it didn't go on for another five minutes. I was left with a perpetual grin on my face during its entire duration, and the song is a shining reason why there absolutely needs to be an officially released recording of the arrangement and the concert in general. The suite received a very large and enthusiastic standing ovation.

From here the concert launched into three songs that I admittedly wasn't looking very forward to: a suite from World of Warcraft, "Theme of Laura" from Silent Hill 2, and a Halo suite. The Warcraft suite, though technically sound and seemingly well put together, did little to allay my lack of enthusiasm. It is a good thing that Akira Yamaoka chose to take the stage and rock my entire face off as an electric guitarist on his own Silent Hill composition, then.

The Silent Hill song was, for lack of better terms, bitching. Yamaoka is a true showman, and even stopped mid-solo at times to throw up the horns, a true ROCK RENEGADE'S show of metal-ism. The greatest part was that all sorts of people from the audience even stood up and threw them right back, including a petite young Japanese woman in front of me. Her guests looked at her confusedly, then did the same. It was pretty wicked-bad.

At or around this point, whenever Roth would approach the microphone after each song to introduce the next piece, fans from the audience would yell "ZELDA!" Roth had to meet it with "nope, not Zelda," and "not yet!" This time, after Silent Hill, Roth approached the mic and said something to the effect of "our next song is from a game that has been played and enjoyed by millions worldwide, and developed an extreme following," and one crazy fan off in the upper balcony yelled "TETRIS!" and sent most of the theater into a fit of applause and laughter.

It was not Tetris, though -- just a suite from Halo, and a very well-arranged and well-received one at that. The orchestral swells sounded so much better coming from a live orchestra than they do on the actual game, and I wouldn't be surprised to hear more of the live sound on the next Halo, similar to the trailer that was shown at E3 this year. Roth also pointed out that he was actually involved in the recording of the original Halo theme back in the late 90s when it was originally recorded (he played violin for Marty O'Donnell, Bungie's chief sound dude and Halo composer). Marty O'Donnell was also in the audience, and stood to be recognized like the other composers had before their songs.

After Halo, the proof was in the proverbial pudding: the program said it was Zelda time, and that's pretty much how Roth introduced it to the raving fans. "It's Zelda time!" The medley left basically nothing to be desired. It started off with the introductory prologue theme from the title screen of Ocarina of Time, and then moved into the classic overture adventurer's theme from the original Legend of Zelda. Then we got pushed into a very surprising arrangement of some music from Adventure of Link, which made me maybe the happiest person in the world. From there we got a good rendition of the Hyrule Castle theme from Link to the Past, and then (even more surprising than Zelda II) an orchestrated version of the full Wind Fish theme from Link's Awakening. Second to maybe Mitsuda's Chrono arrangement, that part made me the most happy at the concert in general. The arrangement closed of with a redux of the original adventurer's theme. This song ended in nearly total standing ovation.

The final song of the night was the classic performance of Uematsu's "One Winged Angel" from Final Fantasy VII (which the program erroneously listed as being from Final Fantasy VIII). Of particular note is that this was the original orchestral version, as was heard on the Dear Friends tour, and not the Advent Children version like they did with the Black Mages at the More Friends show. The song, replete with complete choir in tow, ended to a nearly three-minute standing ovation as the crowd clamored for an encore, which immediately commenced as Roth marched back on stage and started "One Winged Angel" yet again! It sounded just as good the second time, and the crowd again offered a standing ovation.

As everyone piled out of the concert hall, though, I remembered that my job was not over. Anyone who had gotten ahold of VIP tickets was privy to a "meet and greet" on the upper balcony, where all of the composers present had lined up at a table to sign autographs. The line of people waiting to have their precious goods signed (I saw everything from Arnie Roth's old CD liner notes to limited edition action figures to an acoustic guitar) was unbearably long, and in this case having a card that said "press" around my neck turned out to be fairly fortunate. I squeezed in line and got my bounty signed, which included Jessica's copy of Final Fantasy III for the Famicom, Final Fantasy VII, and a DVD copy of Advent Children by Uematsu, a SNES copy of Chrono Trigger by both Uematsu and Mitsuda, Legend of Zelda: Wind Waker by Kondo, and the Play! program by everyone. Angela Aki and Arnie Roth also made guest appearances to sign a few autographs. 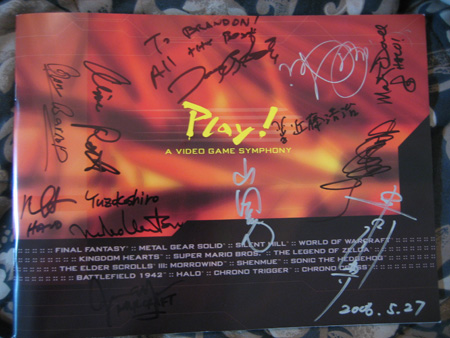 While I was standing in line, I got to talking with an older guy who had flown in from Dallas to see the show. We discussed how probably less than half of the people here had ever even seen a live orchestra before. He said he found it refreshing to see hoots and hollers, cheering, and was glad that it wasn't so "stuffy" like other orchestra or opera he had seen.

On the walk back to the hotel, I was pretty much still in awe at what a kick-ass show I had witnessed, but I couldn't stop thinking about what the guy had said about this being not so "stuffy," and, to be more specific, the crowd's reaction to the Mario medley. It really does ring true, what Uematsu wrote in the program's notes: music is the seeds, and video games are the soil. The Play! concert isn't just about hearing music from video games, it's about hearing music that everyone has heard before under a different set of circumstances. The Japanese family in front of me probably played Super Mario Bros. just like I did, albeit on a Famicom instead of an NES.

Like Mitsuda said in the interview I did with him (interviews are on the next two pages, by the way), "All the work I did has some memory with it that I enjoy. Every work is the 'best one!'" Every video game and every song has some memory for somebody, something they can associate with it. For me, Super Mario Bros. reminds me of my childhood spent sitting on our living room floor trying to finish the first world. To other people it might mean different things. But this is why Play! succeeds. It reminds us of things that we all can share, regardless of language, regardless of age: memories of times spent playing games. If a fully orchestrated suite of music from Super Mario Bros. is what brings us together, then the concert really has served its purpose.
Quick Links