Like David Kirsch, Mark Haigh-Hutchinson is a member of Metroid Primes main program team. Prior to joining Retro Studios, Mark worked as a programmer for Lucas Arts and contributed to a number of well-known Star Wars titles, including Shadows of the Empire (N64) and Star Wars: Rogue Squadron (N64), in which he was the project leader for both games. Mark Haigh-Hutchinson, the Project Leader, laid out the basic mission parameters. The rest of the level team and I took those ideas and combined them into a story that tied into the universe, while spicing up the basics with Star Wars based ships, characters, and planets, explains Kevin Schmitt to TheForce.net (May 7, 2000) on the subject of Rogue Squadron (N64).

I'm the [Project Leader] on this game (Shadows of the Empire) as well as doing a little of the programming. I've been working on this since the end of September '94, which is why you've only seen those minor credits. I have high hopes for this game... it's really coming together. It's been a lot of work but the effort is finally paying off.

The N64 is a *superb* machine... less than 3 weeks until the launch in Japan. Mario 64 is one of the best games I have played in a LONG time. I played Mario some time ago, and again at E3. Very impressive. I was also lucky to spend 2.5 hours with Mr. Miyamoto discussing both Mario & our game. He is a genius.

Other games included in Haigh-Hutchinsons programming portfolio include Android One, Highway Encounter, Alien Highway, Paperboy, Indiana Jones and the Last Crusade Action Game, Zombies Ate My Neighbors, and Overlander. More impressive than the roster itself, is the fact that Haigh-Hutchinson did all the programming for those games! He also contributed additional programming to Star Wars: Episode I: Racer, Star Wars: Rebel Assault, Dark Forces, and Magic Boy.

Considering his role in past projects, programming and mission parameters, it is reasonable to conclude that Mark played a very similar role in the development of Metroid Prime and is currently doing the same with Echoes. Many gamers and critics praised the Retro Studios staff on the wonderful scripted scenes throughout Prime, so it shall be extremely interesting to see if they will be able to pull it off again.

Last, but definitely far from least, is Gene Kohler Jr. It is very important to point out right now the Mr. Kohler is no longer employed at Retro Studios, but instead working hard over at Ensemble Studios (before that, he was at Microsoft Game Studios working on Mythica for the PC). So you Nintendo fanboys are probably thinking to yourselves, Why are you including Mr. Kohler if he is obviously not working on any more Metroid titles? While that is a valid point to make, you will quickly understand why Gene was so important to Metroid Prime when you find out what he worked on for the game.

First, Mr. Kohler was the man responsible for the Samus Aran character model in Metroid Prime. For those not terribly familiar with Echoes, here is a side-by-side comparison of the Samus models: 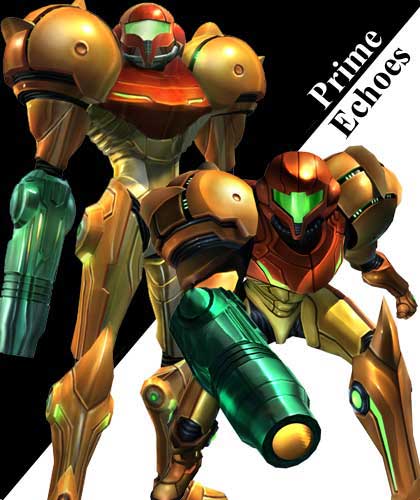 As you can see, Samus figure in Echoes looks considerably different from the figure Gene Kohler created for Prime. Now, this may not be that big of a deal to most people, but it is very interesting to note the change in art direction now that Gene no longer has influence on the series.

Yes, it is true. Everyones favorite fat, ugly lizard was originally in Metroid Prime as a boss, but was never included. For those that want to see what could have been, here you go:

The Kraid image has been temporarily removed by request.

Quite an impressive character model, wouldnt you say? It took a week to model and another week to skin. Sporting nearly 6,000 polygons, this towering menace would have been a formidable foe to tangle with.

"I had completely finished modeling and skinning Kraid. The level that he was to be included in was well underway to being designed. There just was not enough developement time remaining to fully implement all aspects of the scenario that were needed to pull off a highly polished\ fun gaming experience... animations\ effects\ programming\ etc. It was decided that Kraid was not imperative enough to the Metroid Prime project to run the risk of pushing up the release date in order to fit him in.

I'm sure the folks over at Retro are designing ways to fit Kraid in possible future Metroid titles."

According to Mr. Kohler in an email to N-Sider, Kraid is said to have a metal plate covering his face due to it being a designed gameplay feature - an item that you had to overcome in your encounter against Kraid. Although, he said, if the model does appear in a future Metroid title, expect some modifications to be made as the older ideas become refined.

Beyond Metroid Prime, Gene also did a number of character models and skins for Retro Studios canceled game Raven Blade. He enjoyed the project as Fantasy is one of his favorite genres. He worked on the title for nearly 6 months. Those that remember the few screenshots released of Raven Blade from E3 2002, know that the game sported some of the most impressive graphics for the Nintendo GameCube at the time.

The N-Sider staff and I wish Gene Kohler good luck on his many future endeavors outside of Retro Studios and Nintendo, however, we wouldn't mind if he decided to return to Retro Studios!

The team at Retro Studios may not have been together for too long, but they have accomplished more in their first game than most studios can ever hope to achieve during their entire lifetimes. In many respects, its first creation rivals the creative genius of Nintendo's EAD itself. With Nintendo at the helm, the possibilities and opportunities ahead of the Texas-based powerhouse are all but endless at this point. However, one thing is for certain: this is one fan that can't wait to get his hands on each and every game lucky enough to adorn a Retro Studios logo. For, with a team filled with so many incredible talents with such a full and rich history in the video game industry, there is only one way things are going: up.