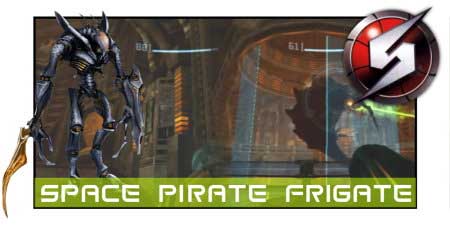 Meet our heroine: interstellar bounty hunter Samus Aran. Designed by Andrew Jones. Modeled and skinned by Gene Kohler. "The immensely talented concept artist at Retro, Andrew Jones, created each and every concept for Prime including all of her suits," explains Gene. "His artwork provided an outstanding base to allow me to do what I do create the actual in game asset."

"I think what I really enjoyed about the beginning of the project was working out all the details of Samus that you never see. All the different directions; what's inside her suit. Before I even got the job at Retro, I was drawing Samus. And it was very humbling in that it was an eye opening experience to realize that it's not my job to draw my Samus, because my Samus is my Samus." -Andrew Jones, G4TechTV (Pulse)

When work first started on Metroid Prime, Gene Kohler was still working on Raven Blade. Up until July 2001, the original Varia Suit model was created by Mike Sneath and skinned by Rodney Brunet. "Rodney was shifted from the project directly before I got onto it," recounts Gene. "The original Samus looked fantastic in my opinion and the fans seemed impressed and excited by what they saw. When I came on board I was first asked to re skin the original model. Later I was ordered to create her from scratch (model and skin)." 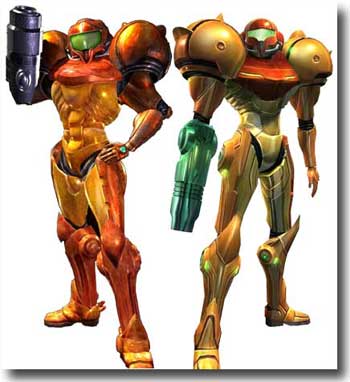 The story only gets more interesting from there. Gene ended up creating three entirely separate versions of Samus in the Varia Suit. Gene recounts his memorable experience for N-Sider.

"As I previously stated, my first version of Samus was simply re skinning Rodney's original paint job with a very used, scratched, chipped look. Her hues were very subdued. From this version I was then asked to model and skin small blue energy canisters on her back to kind of portray some continuity between her suits and the energy present in her morph ball. I believe that there was some early screen grabs released to the public that display the canisters that I am speaking of.

Here is where the memories come to play. I am sure we all remember where we were at and what we were doing on 9/11/01 the day the Twin Towers in New York were attacked. Well, I was working on creating the blue canisters for the Varia suit. I woke up that morning received a phone call from my brother, Rick Kohler (an environment artist on Prime), at about 9 a.m. telling me to turn on the TV. I watched in disbelief at what I was viewing. I thought about staying home from work that day to remain glued to the TV I was shocked and much too furious to work. I came to the conclusion that I would go to work continue with my day the best I could. Reason being is that one of the main objectives that terrorism wishes to accomplish is to create havoc, to disrupt our free way of life and halt progress. My perspective of what I was doing was to not allow their actions to halt my progress... to disrupt my day. I would continue to go to work and finish the blue canisters on the Varia suit. I did not go home that day until they were complete. [Smiles]

After the worn scratched up version of the Varia suit (with the blue energy canisters) was completed I was asked to start from scratch on Samus. I created the version currently present in Metroid Prime. So to the best of my knowledge there were four versions of the Varia suit the three that I spoke of and the version that Rodney and Mike created. I do not know how many versions those guys were asked to complete."- Gene Kohler, August 3, 2004

"I certainly would like to believe that I was assigned to create Samus due to my abilities to step up to plate and make cool things happen. When Retro realigned its production strategy by focusing its development energies into Metroid Prime many very talented people were shifted. I went from Raven Blade to Metroid Prime. As soon as I heard of my new assignment I emailed Todd Keller (the Art Chief in charge of making Prime's art assets). I informed him of my position and passion as a character artist and displayed several rendered images of my Raven Blade artwork. I did this to aid him in placing me where I could best help him and the team. My initial missions on Prime were to create the parasites, some wasp variations, and the morph ball. Next thing I knew I was assigned Samus. I was and still am very appreciative of the opportunity to work on a character that has such a strong lengthy history. I believe that my introductory email to Todd coupled with my performance on the previously mentioned characters gave Todd the confidence to trust me with Samus. I was never "in charge" of Samus I simply created her based on Todd Keller's direction and Andrew Jones' concepts." -Gene Kohler, August 3, 2004

Normally, Gene would use a generic human model for his playable characters, however in the case of Samus, there was no pre-made humanoid model in the 3D package being used for Prime. Faced with this problem, Gene was forced to begin from scratch and used Mike's original model to properly scale her to the prepared skeleton. "As I created her various armor stages I then used my first Samus model to save a vast amount of time. To make each and every armor type from scratch would be an astronomically inefficient use of development time."

The first level Samus encounters in an orbiting Space Pirate Frigate sending out a distress signal. The Frigate level is in stark contrast with the rest of Metroid Prime's "earthy" feel and tone. Void of any organic architecture, this level sets gamers in the role of the sci-fi bounty hunter. For the purpose of this article, we spoke with LeRoy Strauss about his involvement in creating the Parasite Queen Chamber located on the frigate.

What is of most interest about the environment design on Metroid Prime is the fact that the modelers of each area created their own concepts, instead of having concept artists design them. "Well the way I approach building a level is I start by doing little thumbnail sketch's," described Strauss. "That way if I decide I don't like the look of something I can just draw a new thumbnail sketch rather than scrap a few days of work. If I like how the rough drawings are starting to turn out, I have a good idea of how I want the room to look, so the blueprint is now on paper and in my head. Then I plan on how I can best use my time and what pieces can be re-used in the same room without being to overly redundant."

According to LeRoy, modeling and texturing of the queen's boss chamber took between two and three weeks. When questioned on the polygon count, he became a little vague due to non-disclosure agreements (NDAs) imposed by Nintendo and Retro Studios. "I know we pushed the GameCube very far and still tried to maintain 60 fps. Lets just say lots of thousands. [laughs]"

Many gamers, including myself, have always wondered how each member of the environment (level creating) team at Retro was able to design and make individual areas that blend together so seamlessly with one another. It would be difficult to argue the fact that the entire game looks like it was hatched from the mind of one artistic visionary. But how was this possible? More specifically, how was the team able to keep the Space Frigate's architecture in perfect unison with the established visual style of the Space Pirates?

"Well the art director oversees the worlds. Then it is broken down to a few people starting to build rooms working with the [art director] to set a style for an area," explains LeRoy. "There was a lot of collaboration on worlds and textures so we could make it look unified. Plus with the same style of lighting and fog...etc. it all ends up looking very close together. I could tell who painted which texture but that is because I worked with guys so I could spot their individual styles. Its just good it ended up seamless which is sometimes difficult to do in games."

If you were one of the lucky souls to endure the assaults of the few Space Pirates still alive on the doomed Frigate, then you eventually came face to face with the entity responsible for all the carnage around you: the Phazon-enhanced Parasite Queen. Originating from the mind of lead designer Mark Pacini, the monstrous Parasite Queen is the creation of concept artist Andrew Jones and modeler Mike Sneath.

"The Parasite Queen took me about 20 days to model and texture. It was actually my very first boss I got to do for Metroid," explained Mike. "Quite a few people have asked about the bump maps or multi pass rendering we did on some of the characters and I always reply, 'What bump maps?' [Smiles] The Parasite Queen, for example, is purely color maps. There are no fancy render passes or bump maps. I just spent a lot of time and put a lot of effort on the texture maps to make it look right. The only inspiration I had for modeling the Parasite Queen was the concept." In addition to the in-game model, Mark is also responsible for the Parasite Queen model shown in the FMV (Full Motion Video) video during E3 2001. 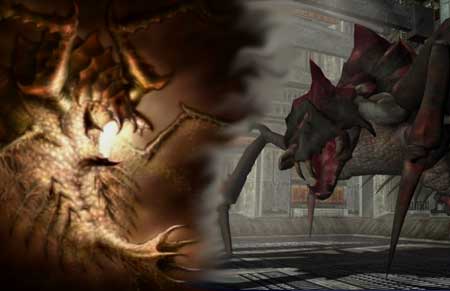 What may be of even more interest is the fact that Samus could have been fighting "The Queen" in another setting that did not make the final cut. "I made the Parasite Queen almost at the beginning of when we started Metroid, Mike told N-Sider. "LeRoy [Strauss] made the chamber you see in the game maybe a year or so later. There was a previous chamber, which was scrapped because the game play wasn't working properly so the designer remade the chamber."

Lead Art Director, Todd Keller, was once again credited for the wonderful harmony in the style and design of the Parasite Queen and Reactor Chamber, which was vital to insure that it didn't appear as if two different artists had worked on the scene.