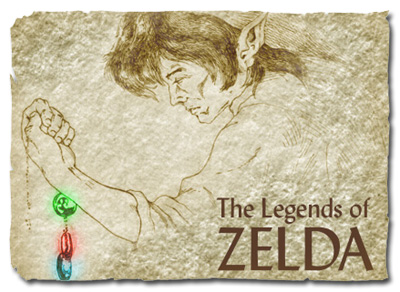 If there's one thing in the video game world that's been twisted and misunderstood more than anything else, it's the timeline for the Legend of Zelda series. Due largely in part to both A) Nintendo not making the effort to make the connections between the games clear, and B) Nintendo of America putting a timeline up on the official Zelda site that in no way makes any sense, fans of the series are lost and confused. Well fear not, fellow readers. After hours upon hours of research, and lots of help from our fantastic forum-goers, I've managed to compile what I think is the most accurate representation of the Zelda timeline available.

So what constitutes an accurate source for a feature like this? Not the Zelda comic books, that's for sure. And certainly not the old Zelda cartoon. All my information is taken either directly from the games themselves, or from their respective instruction manuals. Anything else you see is simple deductive reasoning. After all, and I'll be the first one to admit it, there are a LOT of plot holes. Amazingly, though, Nintendo seems to have created a timeline that accidentally makes perfect sense. You just have to immerse yourself in the source material for long enough.

Before we begin, though, I'll give a bit of preparatory information. In order to accurately represent the timeline, one has to realize that there are no less than three individuals with the name "Link" (and more are sure to come). Since many of you are unfamiliar with the multiple Link theory, I'll provide a miniature little timeline for you right here. The whole idea is that since the games take place over a multitude of centuries, you couldn't possibly be playing as the same character every time. Or saving the same princess, for that matter. While Ganon is always the same character, due his innate abilities, Link and Zelda change every couple games or so. Much of the documentation found in instruction manuals and even during the games themselves supports this theory. And if that's not enough for you, Eiji Aonuma confirmed the whole thing in a recent interview about the Wind Waker. The following will explain more concisely, as well as clue you in to the acronyms I use later on in the chapters:

And that's that. Each grouping of chapters takes place in the same time period, with the same Zeldas and Links between them. And don't worry, both Zelda IV and Zelda I being in the same time period at the end makes perfect sense. If you read the chapters, that is. So what's stoppin' ya? Click the link below to begin, or choose a specific chapter using the table of contents in the info panel to the right.

And one last request. Please, spread this timeline around. There's so much misinformation about this series running rampant in the gaming community that it's occasionally hard to stomach. So any time someone mentions something you just KNOW is wonky, kindly point them to this url. Hopefully, together, we can eliminate all possible confusion. And by all means, if you've got something to add or comment on, drop me a line or talk about it on our forums.

And now, without further ado...

The Creation of a Legend...

Comments? Questions? Feel free to drop me a line by clicking below.