The Creation of Hyrule

Long ago, the kingdom of Hyrule was but a glimmer in the Gods' eyes. Descendent from a distant nebula, Din - the Goddess of Power, Nayru - the Goddess of Wisdom, and Farore - the Goddess of Courage saw fit to create the world from which all our stories hail. As the legend goes, Din dyed the mountains red with fire and created land. Nayru created science and wizardry and brought order to nature. And Farore, through justice and vigor, created life.

Farore's children took many shapes and sizes, ranging from peaceful forest-dwellers to enormous rock-eaters. The great Deku Tree watched over the forests and tended to the Kokiri, a child-like and playful group of forest sprites. The Zora, a regal fish people, populated the country's waterways and paid homage to the water god Jabu Jabu. The Gorons, a lazy and peaceful race, topped the peaks of Death Mountain and thrived in its fiery caves with their rocky and temperature-resistant hides. The desert wastelands were home to the Gerudo, an entirely female race driven to piracy and thievery by their hostile and unforgiving surroundings. Lastly, there were the Hylians - the most prestigious and widespread race in all the land. The Hylians were very skilled in the art of wizardry; it was said that their long and pointed ears allowed them to hear messages from the Gods. They dubbed their vast lands "Hyrule", and ruled peacefully through treaties with the other races.

Their work complete, the Goddesses left the newly created world - but not before leaving behind a symbol of their power. Placed in the holy Golden Land, referred to in later tales as the Sacred Realm, the omnipotent Triforce was to serve as a guiding light for the new races of Hyrule. It was said that anyone who acquired the Triforce would have three titles bestowed upon them - "The Forger of Strength", "The Keeper of Knowledge", and "The Juror of Courage" - and with these prestigious titles would also come incredible power.

The Lure of the Triforce

Needless to say, the Triforce was a highly desired artifact. This desire was only intensified by a verse from the Book of Mudora, an ancient collection of Hylien mythology:

In a realm beyond sight,
The sky shines gold, not blue.
There, the Triorce's might
Makes mortal dreams come true.

The Hylian king, along with several of his trusted sages, researched and quested after the golden triangles. After a seemingly endless search, they were surprised to stumble upon the entrance to the Sacred Realm right next to their very own castle. They entered, and finally found themselves face to face with the sacred power. The king returned to Hyrule triumphantly with his prize, to the accolades of his people. Being a just and benevolent ruler, the king was able to use the Triforce to maintain peace and prosperity throughout the entire kingdom. The golden triangles were emblazoned upon many structures throughout the land, and revered as a symbol of the Goddesses' favor. 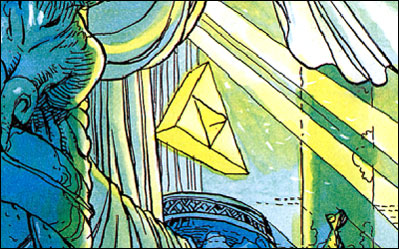 The king eventually grew old and passed away, leaving his son to assume control of both the kingdom and the Triforce. However, to the prince's surprise, the Triforce split when he attempted to claim it. Not possessing all of the requisite traits, the prince was unable to control the Triforce in full. Both angered and confused by this, the prince found solace in the words of one of his father's former advisors, a powerful magician. He told the prince that before his death, the king had mentioned something about the Triforce to the prince's younger sister, the princess Zelda. The prince immediately questioned the princess, but she refused to tell him anything. The magician, angered by Zelda's refusal to talk, threatened to put the princess into an eternal sleep if she did not speak. Still she refused. Now infuriated, the magician summoned all of his power and began to cast a sleeping spell on Zelda. Surprised, the prince desperately tried to stop the magician's spell, but he was unable. The princess fell into an eternal sleep, and the magician, having overused his abilities, collapsed and breathed his last. The prince was stricken with grief. He placed the princess in a secret room in the North Castle, hoping that she would one day awaken. He also made a decree in memorandum, that from this day on, every princess born into the royal family would be named Zelda. This event would be known throughout the ages as the "Legend of Zelda".

After this tragedy, the former king's advisors began to seriously question the wisdom of allowing the Triforce to be controlled by the royal family. These advisors, known now as the Ancient Sages, had studied the Triforce to great lengths. They had determined that only a special type of individual, one who had the three elements of his soul in perfect harmony, could successfully claim the Triforce in full. After witnessing the prince's inability to control the Triforce, the Ancient Sages decided that it would be safest to seal the golden power away until a suitable recipient was found. The sages used their vast knowledge to design several systems that would best protect the Triforce.

They began by constructing the Temple of Light in the center of the Sacred Realm. This temple would house the Triforce, and serve as a gathering place for the sages. The Temple of Time was built in Hyrule, over the entrance to the Sacred Realm. This temple acted as a locking mechanism that would prevent anyone with evil designs from ever entering the Sacred Realm. Three Spiritual Stones were created as keys to the Temple of Time, and given to the various races of Hyrule for protection. The Ocarina of Time, capable of awaking the three Spiritual Stones, was given to the Hylian royal family. And lastly, The Master Sword, a sword capable of defeating even the most powerful of evils, was forged and placed in the Temple of Time as a final key. Only one who proved their strength, wisdom, and courage could acquire the three Spiritual Stones, and even then they would need to be in possession of the Ocarina of Time and be able to pull the Master Sword from its pedestal in order to enter the Sacred Realm and claim the Triforce.

As a final measure of security, the sages concentrated their vast magical powers into seven medallions. Left within the Chamber of Sages in the Temple of Light, these medallions would serve to pass on the sages' powers should the need to permanently seal the Sacred Realm ever arise. Rauru, one of the most esteemed sages, sealed himself inside of the chamber to await an individual deserving of the golden power. Another sage by the name of Kaepora Gaebora arranged to have himself reincarnated as an owl, so that he could watch over Hyrule and guide those he thought worthy of the Triforce. It was just a matter of time.

A: The word "sage" is used repeatedly throughout the Zelda series to represent certain figures of great importance. Gossip Stones in Ocarina of Time speak of Kaepora Gaebora and his identity as an "Ancient Sage", there are seven "sages" that seal the sacred realm in that very same game, and there are "sages" that maintain the power of the Master Sword in The Wind Waker. Given the very definition of the word, and the role that these characters play in each successive game, one can assume that the title of "sage" is given to any individual who is closely tied to Hyrule's most sacred artifacts and mythologies. The Ancient Sages Rauru and Kaepora Gaebora were of the group that built the Temple of Light and originally sealed away the Triforce. The seven sages in Ocarina of Time again sealed the Sacred Realm with the assistance of the Hero of Time. And the sages in The Wind Waker were originally advisors to the King who both served to call down the Goddesses, as well as maintain the power of the Master Sword. So basically, if you're a sage it's your duty to watch over or maintain some magical power or ancient seal.

Q: Who was the magician that cast the sleeping spell on the Princess Zelda?

A: It's safe to assume that the magician was in fact a sage of the former king - one with less than noble intentions. He had probably planned on manipulating the young and inexperienced prince behind the scenes, and through him gaining access to the Triforce. In fact, the Triforce probably split not only because of the prince's impurity, but also because it "knew" that the magician had evil plans. His plot foiled, the magician desperately tried to get information out of the Princess Zelda, and took out his anger on her when she refused to talk. There could be much more to it than that, though, as addressed in the next question.

Q: What exactly happened to the Triforce when the prince attempted to claim it?

A: In order to figure this out, we can use the events of Ocarina of Time as a reference. (Read the next chapter first, if you aren't familiar with said events.) When Ganondorf attempted to claim the Triforce, it split into three parts. Ganondorf kept the part that most fit his personality, and the other two parts went off in search of those who most embodied their characteristics. The same thing probably happened with the prince. Since he was young and inexperienced, the prince was likely to embody neither power nor wisdom. He probably claimed the Triforce of Courage, as we can see that he was quite courageous in his attempt to protect his sister from the magician's wrath. The Triforces of Power and Wisdom most likely then implanted themselves in the magician and the princess Zelda, respectively. The magician was clearly very powerful, and the Zeldas of this series have always been characterized as very wise. It was probably for that reason that the King confided in her before his death, most likely warning her about the magician's ambitions.

If the Triforce was indeed split up in this manner, the magician was probably shocked and pleased to find that he was suddenly in possession of a piece of the sacred triangle. But like most evil maniacs who suddenly find themselves with power, he probably desired even more. Knowing that the king had said something to Zelda before passing away, he tried to get the prince to milk the information out of her. When she refused to talk, the magician lost it and cast his spell.

Since The Wind Waker showed us that these Triforce pieces can go in and out of a person's body in different situations, the sages probably used their magic to extract the pieces from the hosts. Once removed and brought back together, the full Triforce could then be sealed away.

Q: I don't remember ever hearing about the king questing for the Triforce, or the sages deciding to seal it away. Where'd this stuff come from?

A: Deductive reasoning, that's where. Many of the storyline elements of the Zelda series have to be constructed from scratch, based upon what few concrete facts exist. The fact is, the Goddesses placed the Triforce in the Golden Land when they created the world, and suddenly the royal family has it in the Adventure of Link backstory. For that, you just have to make something up. And based upon simple logic, and the location of the Temple of Time in Ocarina of Time, it can be assumed that the king went questing for it, discovered it, and returned to Hyrule triumphantly with it.