Link, having been sent back to relive his childhood, was eager to live a normal life. He visited Lon Lon ranch and easily tamed Epona the horse with the knowledge he had gained from riding her in the future. He also went to Hyrule Castle to rekindle his friendship with a young Princess Zelda. After some time, however, Link began to grow restless. He began to crave the adventures of days past. He also longed for the one he had shared those adventures with, the fairy Navi. However, Link and Navi had parted ways soon after they were sent to relive Link's 7 years. So to satiate his lust for adventure, Link decided to go on a quest to find Navi. He bid farewell to Princess Zelda, who gave him the Ocarina of Time as a parting gift, and rode off on Epona.

While wandering through the Lost Woods, something spooked Epona. She reared up, throwing Link to the ground and knocking him unconscious. When he awoke, Link found a strangely masked figure rooting through his stuff. Two faries darted around in the air as the masked stranger tooted playfully on Link's Ocarina. When he saw that Link was awake, however, he quickly jumped on Epona and tried to use her to escape. Link leapt after him, grabbed onto Epona's side, and was dragged for some time. He was eventually shaken free and had to follow on foot. However, he soon found himself poised over the edge of a seemingly endless drop. Unable to maintain his balance, Link fell over the edge. And then something odd happened. Colors and shapes swirled all around Link as he fell, and when he landed he was no longer in the kingdom of Hyrule. The masked stranger, referred to as the Skull Kid by the fairies who accompanied him, floated in the air in front of Link. He told Link that he had "gotten rid" of Epona, and then proceeded to cast a spell on him. Link swooned, hallucinated, and finally regained his composure in the form of a Deku Scrub!

The Skull Kid laughed, and floated away. However, he left one of his fairy companions behind. Frightened and desperate to get back to her brother, the fairy Tatl joined Link so she could use him to escape. They worked their way through several rooms until they ended up in the basement of a clock tower. Here they found the mask salesman that Link had originally met in Hyrule Castle Town. He told Link of a very powerful and evil mask that he had acquired, but that had been stolen from him. It was called Majora's Mask, and was presumably the same mask that the Skull Kid was wearing. If Link could retrieve both the mask and his ocarina from Skull Kid, the mask salesman promised that he would free Link of his Deku Scrub body. So Link and Tatl stepped outside. 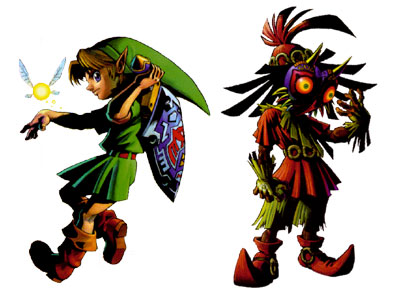 The land was called Termina, and in three days it would be destroyed. A giant grinning moon hung in the air, and very slowly sank towards the town. Link would have to hurry. By making friends with several people in the village, Link was able to get on top of the clock tower in time for the fireworks festival on the third day. And it was there that he encountered the Skull Kid again. Tatl's brother, Tael, cryptically spoke of four locations, and the beings that could be found in them. The Skull Kid batted him out of the way, and used all his power to quicken the rate of the falling moon - which was almost upon them. Desperately trying to think of something to do, Link knocked his Ocarina out of the Skull Kid's hands. He then played the Song of Time, which Zelda had taught him right before he left on his adventure. Time stopped... and began to reverse. Before he knew it, Tatl and Link were back in front of the clock tower on the first day. Amazed by the power he had, Link went back inside the clock tower to present the ocarina to the mask salesman. Quite pleased, the mask salesman taught Link a song that would free him from the spell, as well as turn the spirit of the deku scrub he was possessed by into a mask. With the mask, Link could turn into the deku scrub at will. The mask salesman then asked for Majora's Mask... which Link had clearly forgotten to retrieve. Disappointed, the mask salesman sent Link back out to find it.

Link, by using the power of the Ocarina of Time, managed to turn the three days allowed to him into an endless supply of time. Through interactions with the villagers in Clock Town, Link managed to learn what Tael was talking about. Termina had four Guardians that watched over the land. They had become good friends with the Skull Kid, but when he started wearing Majora's Mask his mischievous and violent actions drove the four guardians to the four corners of the country. Now, in order to stop the moon from landing and destroying everything, Link would have to summon the four guardians and have them stop it. But it was no easy task. Link had to infiltrate four exceedingly dangerous dungeons, each ruled over by an evil mask that the Skull Kid had set lose. Link defeated these four masks, and brought their remains to the top of the clock tower on the third day. He then summoned the four guardians with his ocarina, and they held the moon in place over Clock Town.

But then Majora's Mask began to act on its own. Dropping the Skull Kid as a host, it entered the moon and began to use its power to fight against the Guardians. They couldn't hold the moon for much longer, so Link followed Majora's Mask inside. The inside of the moon was far different than Link expected. A green field stretched out in every direction, beneath a blue sky. A single tree stood in the middle of the field, far off in the distance. As Link approached the tree, the world slurred slightly around him. He could feel himself moving through the air. Clearly this was a magical place. Four children ran playfully around the base of the tree, each wearing one of the masks that Link had slain in the four dungeons. The children wanted only to play, and each one entreated Link to play hide and go seek with them in a small dungeon. When he found them, they demanded masks. Luckily, Link had acquired quite a collection during his adventures in Termina. When he had finally found all four children, he went and talked to a fifth child that was sitting at the base of the tree. This one was wearing Majora's Mask. After agreeing to play, Link entered a final battle with the evil mask. The mask transformed several times, but Link managed to defeat it in the end - destroying the moon in the process, and saving Termina.

In the end, the Skull Kid reverted to his normal self, and turned out to be one of the Skull Kids that Link had met in the Lost Woods a long time ago. He reconciled with Tatl and Tael, and Link left Termina with Epona. Link lived the rest of his childhood peacefully, while his legacy as The Hero of Time continued to echo on in the Hyrule where the remainder of our tales take place.

Facts for Chapter 3 were taken from Majora's Mask.

Keep in mind that this is all taking place in Link's private retelling of his own past. "Another dimension", if you will. That can explain the odd land of Termina, which has many features that are oddly reminiscent of Hyrule, and the new things that the Ocarina of Time can do with the Song of Time.

There's not much else to say about this particular chapter, since its many oddities are due largely in part to the nature of the land in which it takes place. I might add some theories about the area inside of the moon at a later date, but only if I come up with something especially profound.