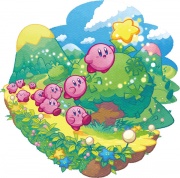 Some time last week, I cleared the final fight on Atsumete! Kirby, known to less crazy people—those content to wait a month and change for the English localization— as Kirby Mass Attack. You may remember this game and my declaration of adoration if you followed our E3 coverage this year. I've personally been intensely curious about it since our first look at it, a tiny clip of inexplicable DS gameplay featuring drawn lines and a metric buttload of Kirbies.

So impatient was I to get my hands on this, my most-anticipated game this year, that I politely asked the venerable Brandon Daiker if he would be so kind as to snatch the Japanese version, which released in early August, off a shelf over there and send it across the Pacific to me. Come to think of it, I still haven't paid him. [You will pay me in ways you cannot imagine--ed.]

Atsumete! Kirby brings HAL Laboratory's other great DS triumph, Kirby Canvas Curse, immediately to mind, not only because it is also controlled with the stylus, but more importantly because it is a game that explores what the almost-seven-year-old DS platform is good at, creating something that cannot be done anywhere else—and folds it into a stunningly complete package that puts to shame the often pedestrian and uninspired efforts the games market is currently inundated with.

So what we are doing here is not controlling any of these ten tiny little Kirbies directly, but instead guiding them by way of a star, which I understand is supposedly Kirby's "star soul" or some other such nonsense. To preface the rest of the article, I should mention that from here on out, I will be sparing you my incomplete understanding of the parts of this game that I will never understand as I don't speak a lick of Japanese. The "star soul" appears where you touch your stylus to the touch screen. Tap and hold and the Kirbies will follow; double-tap and hold and they will dash. You can also toss a Kirby by making a swiping motion or gather them all up by holding the stylus on one and guiding them along a line that you then draw. You start out with just one tiny Kirby and accumulate more as Kirbies eat fruit; an apple nets you one fruit point, banana ten, melon 30, and tomato a full 100—every 100 sounds the Kirby one-up melody and adds another to your Kirbatic mass, up to ten. 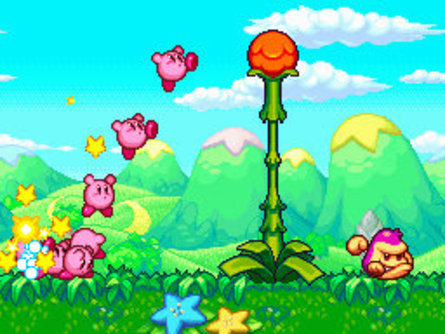 The mass of Kirbies make up not just a stash of lives (if one gets hurt, he'll generally turn blue; one more hit turns him into a Kirby-angel slowly floating up to heaven, though you can rescue him if you get a chance by tossing a live Kirby at him to yank him back down to Earth) but also represent increasing power over the environment. If you only have a handful of Kirbies, even weak enemies may take multiple attacks to take out, but when you have a full complement, you can rush most baddies with impunity. There are also many level features that require the combined strength of a certain number of Kirbies, most notably for the purpose of nabbing in-level medals, which serve a purpose similar to Star Coins in New Super Mario Bros.

What makes this basic design continue to work throughout the game is an unwavering dedication to the question of just what it means to have indirect control over a bunch of tiny little guys like this. Like two-dimensional Pikmin, the larger masses of of Kirbies become more difficult to manuever through hazardous environments, but their strength is needed to tackle large obstacles. HAL also plays with the concept of weight, with stage features and even entire stages themselves influenced by how many Kirbies are on what side of an object. When there's something heavy to move or something to break down, you do it by flinging Kirbies at it repeatedly, chipping away at it Kirby by Kirby. A handful of QTEs require you to tap repeatedly to pull on something; these tasks are easier and thus your taps are more effective when you have a lengthy line of Kirbies all pulling together. 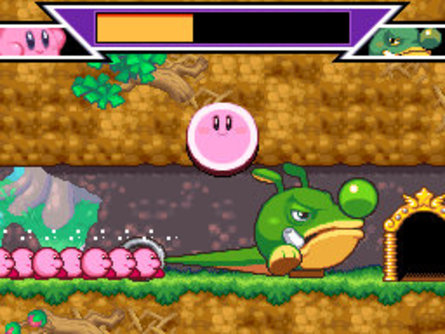 The continuously creative and interesting level design kept up nearly all the way through the game, surprising me and putting a smile on my face more than a few times. The depths of what you can do with an army of tiny Kirbies are plumbed thoroughly. And though I feared back at E3 that the game might prove too easy, that's not really the case; it's not tough-as-nails hard, but obtaining all the medals requires both intelligent level traversal and wise Kirby management to ensure you don't end up at a gate that needs ten to open but oops you have nine. It amounts to a nice, pleasant level of challenge without being stupidly frustrating or unfair.

If there's anything that I could point to as trouble in this paradise, it's that the DS' screen is just a little bit too small. (Maybe I should have played it on an XL?) A full complement of Kirbies sometimes takes up a little too much space on the screen. Also, I got a little freaked out when the mouse from Squeak Squad (I guess his name is Squeak? yay originality) appeared to give me advice I had no hope of deciphering, though this will likely be a non-issue to native speakers of the game's language. Turns out the game also occasionally rewards you with invincible candies if you're starting to suck, preventing things from becoming a little too agonizing. 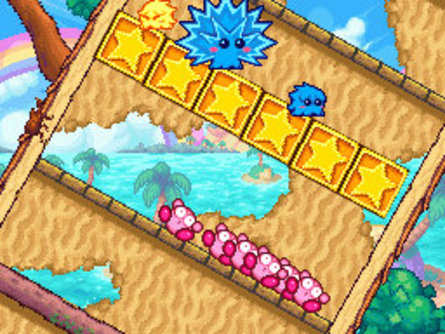 So that's all about the main game, which would easily be worth $30 on its own, but HAL wasn't content to leave it there. Sub-games, something of a Kirby tradition, make a return in Atsumete!, and I am pretty sure these are the best ever seen in any Kirby game. Two in particular blow the roof off the silly little distractions (note: silly little distractions are still included, if that's your thing) that I've played in past titles: the Kirby pinball game and the (insert incomprehensible Japanese title here) "EOS" shmup.

The former is reminiscent of both Mario Pinball Land and Metroid Prime Pinball, with a pink Kirby-ball as your pinball, one main table to rack up points on, and several sub-tables for boss fights. It's really entertaining, even if the main table is a bit simplistic—not quite enough to make up for the fact that I still can't get Pinball Pulse on my 3DS but yes. The latter sub-game, the shmup, is positively inspired. Playing off the Atsumete! theme, you start out with a single auto-firing Kirby who follows your stylus around the screen; as you make your way through the stages, you can shoot down skull dudes carrying your friends who then join you until you have a lengthy snake of pink destruction trying to keep a combo up. Both of these are, as I said, short to just blow through once, but they're fun to revisit to try to top your scores. For the first few days, I probably spent as much time with them as the main game.

I read Nintendo Power's review of the upcoming U.S. release of this title the other night, and I had to smile a little; the reviewer seems like he really liked the game (spoiler: 8/10), but he's got a foot firmly stuck in the "where is my traditional Kirby walking-around and inhaling-enemies-for-powers" mire. There's probably a certain kind of open-mindedness necessary to completely appreciate Atsumete! for what it is instead of obsessing about its non-traditional makings. But even those hard-hearted souls should find it difficult to not crack a smile at what Atsumete! has accomplished. It proves that HAL has, decades later and in today's harsh industry, still got the chops to really make something special.
view full archive