The Console War (Part One)

The coming years might give new meaning to the term "console war". No less than four major platforms will be battling it out for consumer attention and retail space come fall 2001. And right in the middle of it all is Nintendo's Gamecube, the successor to the Nintendo 64. So what exactly is Nintendo facing here? Can the "house that Mario built" fend off three other competitors? Take a look at each console and see how they stack up against Nintendo's cubed wonder. In part one of the special we examine Nintendo's chief competetion, the Playstation 2. 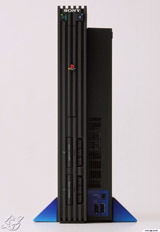 Despite all its misgivings, there's no denying Sony's controversial Playstation 2 entertainment machine is going to have a major impact on the industry in the general. Sony is flaunting the PS2 as an all-in-one gateway that will give the electronics giant a clear portal for its ambitious online broadband entertainment network. The machine not only plays video games, but DVD movies, CDs, and original PSX CD titles as well. It basically does everything except make you breakfast. Sony's uber-console is not without its flaws, however. For one, there are only two controller ports, which is a bit of a let down considering the Dreamcast, Gamecube, and XBox will all offer 4 controller ports right from the get go. 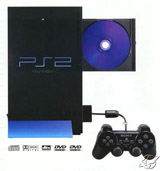 The Playstation 2 architecture has also come under extreme scrutiny, with major developers such as Konami and Capcom voicing their dissapointment with the difficult PS2 development environment. Critics point at the system's limited 4MB embedded VRAM as a major problem in creating game worlds with rich, detailed textures and anti-aliased visuals. And it appears the critics have some valid concerns. Despite being touted as much more powerful than Sega's older 128-bit Dreamcast console, the first batch of Playstation 2 games have been predictable, and visually, while showing flashes of brilliance, are generally only on par (and in some cases below) what the Dreamcast is doing graphically.

Having said all that, however, there's no denying that Playstation 2 boasts a large head start over Nintendo and Microsoft. The PS2 also has the benefit of the existing Playstation brand name, which is unquestionably the standard-de-facto amongst the majority of consumers when it comes to home gaming. The machine is also quite a good value considering what you're getting--a new game machine and a system that can run DVD movies and older Playstation game titles. Playstation 2 has the backing of every major third-party publisher in Japan and a rapidly growing installed base, which will give the platform some big name titles. Whether those games remain exclusive seems unclear, however.

So where can the Playstation 2 go wrong? There are two glaring points where the Playstation 2 can suffer. It's no secret the hardware-to-software ratio for the machine has been extremely low, despite the fact that the machine has already sold three million units in Japan. What's the problem? Many Japanese consumers are using the PS2 primarily as a DVD player instead of a game console. This creates a serious issue for 3rd party publishers. They now have to compete against movies directly for consumer spending money. Also the glut of PS2 software (there are already 200 titles in development) might seriously water down the overall sales of many software titles.

While games like Final Fantasy X are shoe-ins to sell strong, other game titles such as Armored Core 2 and Type-S have sold below expectations. Consider the US launch. There are a maximum of 1.3 million PS2s coming for the holiday season, yet there will be about 25-30 software titles available in that time span. With so much choice for a relatively small user base, sales of some key PS2 games may suffer. If things get to a point where only high budget titles such as MGS2, Kessen, and The Bouncer can sell significant numbers, developers may lose patience.

Head to Head Versus Gamecube

The Gamecube looks to have the PS2's number in several key areas. The most glaring difference between the two machines is the Gamecube's ease of development. Also, with Nintendo focusing solely on games for their model, third-party publishers may be attracted to the NGC as software ratios could easily be higher than those on the PS2. Sony's machine does have it's own advantages. The earlier release date and wealth of 3rd party support practically guarantees Sony large installed base by the time Nintendo launches in July of 2001 in Japan. Hardware wise, the NGC's bottleneck-free memory architecture and emphasis on amazing texture display along with attainable polygon numbers should ensure the Gamecube can out perform the PS2 by a healthy margin, however.

Can the big N catch Sony in Japan? Without strong backing from the likes of Square and Enix and a much later launch date, it doesn't seem likely, but North America is a whole different beast. Even with all of the N64s problems--essentially no major 3rd party support, expensive cartridge games, difficult design environment, no mass storage medium, key delays to nearly every major Nintendo release, etc.--Nintendo has still managed to secure nearly 40% of the North American console market against the Playstation. There's also no denying that Super Mario 64, Zelda 64, and GoldenEye are the best selling North American games of the past generation, proving that Nintendo hasn't lost its clout in the world's largest retail market. Provided Nintendo does indeed garner some serious third-party support, especailly from RPG makers, they really will give Sony something to sweat about, make no mistake about that. Sony, of course, really has no reason to panic right now.

If the problem plagued N64 could compete with the PSX, the NGC should match up favorably against the PS2. Nintendo's newfound development studios such as Nintendo Software Technologies, Nintendo-Dentsu Cube, Retro Studios, Left Field Productions, Silicon Knights, and Brownie Brown finally give the company a base on which to pump out sports, action, FPS, and racing titles consistently from day one. It's not out of the question to imagine (with some 3rd party help) Nintendo actually landing the largest console market share in the US by 2003/2004. Japan will be more difficult. There's no denying the fact that franchises such as Mario and Pokemon remain extremely popular in the land of the rising sun, however that wasn't enough to make a dent in the PSX's market share. The Game Boy Advance link functions could allow the NGC to ride the popularity of the handheld to its advantage-- certainly a crucial feature for Nintendo. Europe will also be another tricky market. Despite having the top-European development house (Rare, of course) all to themselves, Nintendo has traditionally struggled in Europe. A Euro produced soccer simulation and more edgy software titles could defrost the European market on Nintendo very quickly, however.

More than just market share, however, one would suspect Nintendo's business strategy is focused more on the software sales. Don't doubt for a second that Nintendo wouldn't mind a platform with a smaller installed base, as long as it has a higher rate of software sales. Of course, Nintendo's key to attaining that has always been simple-- make some really, really good games. The company's uncanny knack of dreaming up new and interesting game properties that captivate the world has reaped billions in profits. First with Donkey Kong, then Super Mario, then Zelda, and now Pokemon. That is perhaps their strongest weapon against Sony-- not only their established franchises, but their ability to create new ones that can drive sales and reinvent the way the public views gaming.