View in legacy (desktop) mode
Well, it's finally here. We now know about Nintendo's next-generation game console. In the coming days, N-Sider will be taking an in-depth look at every aspect of the machine and the software demos shown to date (and yes, that includes the a very close look at the specs of the machine and the RAM layout). This is the first part of that special, which will examine the design of the GameCube, and its controller. 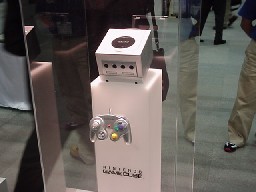 The design of the GameCube unit itself is quite remarkable when you consider its size. Nintendo officially lists the machine at 150mm(W) x 110mm(H) x 161mm(D)-- which is very compact. What's the big deal, however? It's just a design, right? Wrong. Apple already proved that a clever design can help push a complex product, such as a desktop computer, to the masses. It just so happens that GameCube looks like no console ever designed. Its boxy appearance is initially a bit unsettling, but when you consider the unit's size, it's not hard to see why a lot of consumers will see it as "cute" or "cool". Of course, Nintendo is going to have be careful in how they market the machine, because chances are for each person who thinks it looks "cool", there will probably be another person who initially thinks it looks like a lunchbox.

Nintendo demoed the Gamecube in a number of different colored casings, which is something that has helped fuel GameBoy sales for years. The color selection Nintendo showed off (Note: these may not be the final color schemes) was quite diverse. The black, silver, and gold models seem to have a modest futuristic look to them, meshing nicely with the small size of the console. The silver in particular appears to be the early favorite-- if Internet reaction is anything to go by. 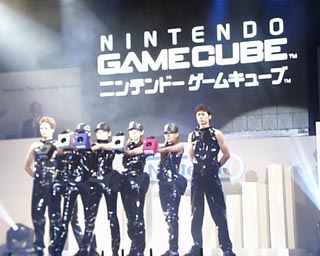 The purple and pink designs are much softer and should appeal more kids and (dare I say it) the female segment of the population. Which brings up an interesting point. The parity between males and females on the GameBoy platform is roughly a 60/40 ratio (male/female), while for consoles, the ratio is much more lop-sided at 80/20 (male/female). Perhaps Nintendo is hoping to attract more female gamers to the GameCube by making it more of a stylish device. The "carry strap" seems to be another interesting (and bizarre) inclusion into the overall design. Miyamoto-san explained the design philosophy by saying:

"We wanted to put forward the image that this is something that will be played by the whole family. It is not audio/visual equipment that is placed somewhere and not moved. That is the main concept that we wanted to push forward in making the design of the console."

The concept of a cube device that can be carried from room to room for entertainment purposes seems interesting enough. This is, of course, a far cry from the bulky, sophisticated home electronics look of the PS2, and that's probably what Nintendo wants. If PS2 is the standard-de-facto set top box, Gamecube would be the exact opposite. In Japan, especially, consumers seem to have an affinity for miniaturized products. This could turn out to be a selling point for the Gamecube in the land of the rising sun.

With the proper marketing, GameCube could be viewed as a unique and singular product. Having said all that, it still should be very interesting how the design of the Panasonic Gamecube model will differ from the standard Gamecube (provided it is released in North America). Since the launch of Gamecube is still 10 months away, it's possible Nintendo might even make some refinements to the Gamecube console based on the feedback they're getting. 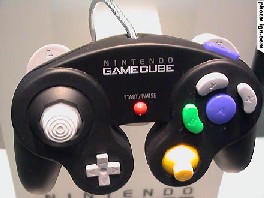 The Gamecube controller definitely left more than a few people puzzled at first glance. The most glaring aspect of the controller configuration is the button layout, which is first layout radically different from the Super NES. On the Gamecube pad, the A-button is the 'central' button, which is surrounded by 3 other smaller shaped buttons. It seems a lot like a d-pad, in many respects. By centering your thumb on the A-button, you can intuitively access the surrounding B, X, and Y buttons. This should work wonders for casual gamers who often find themselves looking down at their game pad to make sure they're pushing the right buttons. The new analog stick has taken the primary placement on the controller, displacing the d-pad to the lower, secondary position. The d-pad is now parallel to the new 'C-button' camera stick, which effectively replaces the C-buttons on the face of the old N64 pad. Finally there are two analog shoulder buttons, which have 256 varying degrees of sensitivity, and a Z-trigger button-- curiously placed on the right-hand side, in front of the 'R' analog button.

Nintendo sees this radical new controller design as the future of console play, and according to those who have actually held the new pad-- they could very well be right. Miyamoto-san states the new GameCube controller will be comfortable for people who have big hands as well as people with smaller hands. The big question now is, will the GameCube controller be able to function well for all types of different genres? After looking at the pad, it seems that even sports games would work well with it, but fighting games remains a touch subject. It is possible that Nintendo might just release a different pad tailor made for fighters. Miyamoto-san commented that with the cheap manufacturing costs of GameCube mini-DVDs, packing-in new controllers with seperate games is now feasible. How does Killer Instinct with a new Gamecube fighter stick sound? Another new addition to the controller design is Nintendo's renewed commitment to wireless game pads. Even back in the mid-80s, Nintendo's initial designs for the more "Americanized" NES included wireless controllers. 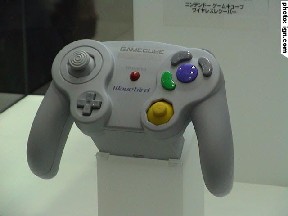 While the standard Gamecube controller still has a wire, Nintendo will be introducing a new wireless "Wavebird" Gamecube controller. The Wavebird can function without a wire up to 30 feet away from the Gamecube console via radio signals. It's possible that Panasonic might even incorporate the wireless Wavebird controller technology directly into their Gamecube DVD set top box devices. A DVD player with a lot of wires hanging out of it just doesn't seem right. It should be noted that there still are features of the Gamecube pad that the big N is keeping under lock and key. This is for the purpose of preventing rival companies from stealing these concepts. One can only speculate what these features are right now, but don't expect a full unveiling of the controller until E3 2001.
view full archive