View in legacy (desktop) mode
"The NINTENDO GAMECUBE will carry on the 'DNA' of Nintendo games and give birth to a new kind of entertainment that surpasses existing concepts of what great gaming is."

And therein lies the philosophy behind Nintendo's Gamecube. This philosophy is in stark contrast with the Nintendo 64, which was revolutionary, but lacked the design finesse that made the Super NES such a successful piece of hardware. What Nintendo overlooked while designing the Nintendo 64 was the game developer. The Gamecube, on the other hand, appears to be the most meticulously designed console ever.

The big N has zeroed in on creating a machine that allows game designers to create games with high-end visuals and sounds and still be able to sustain features such as a smooth frame rate, detailed texturing, and complex AI. As if sensing the shortcomings of its chief rival, Sony's Playstation 2, Nintendo is also quick to point out how easy the Gamecube is to program for. It's not just about reaching the highest performance, as far as Nintendo is concerned. It's about sustained performance. So what exactly is under the hood of Nintendo's miniature cube wonder?

The heart and soul of the Gamecube architecture is unquestionably the RAM-layout for the chipset. The main system memory for the machine is 24MB of 1T-SRAM with a 10ns or lower sustained latency. Nintendo recognized early on that developers always need more RAM. Of course, selling a mass-market item such as a game console, requires limits to how much RAM you can have. "The biggest thing for us is not the amount of memory, but the type of memory," states Nintendo of America's, Jim Merrick. MoSys' 1T-SRAM seemed to fit the bill Nintendo was looking for. The 1T-SRAM is a high density one-transistor cell setup that frees the Gamecube of bottleneck problems that have plagued most recent game consoles.

The use of 1T-SRAM also provides other benefits. The one-transistor SRAM main memory and embedded memory requires less extensive optimization of game code. This should be music to the ears of Nintendo executives who saw several key N64 keys miss their projected release dates. The main 24MB of RAM is complimented by a secondary 16MB of NEC 100MHz DRAM. This RAM is referred to as the A-memory, and can be used for audio, animation, and other functions that don't require the high-speed main memory. The combination of the two is truly seamless. 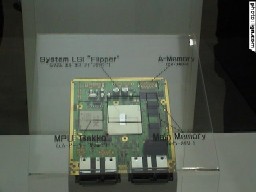 The GPU for the Gamecube chipset has been in development at Art-X's Pal Alto, California-based headquarters since early 1998. The startup graphics company features a number of ex-Silicon Graphics staff members who helped Nintendo design the N64 game machine. The Flipper chip, like the Gekko MPU, is manufactured using a 0.18 micron process and features 3MB of embedded 1T-SRAM memory. That 3MB is divided up with 2MB being assigned as a frame buffer and the other 1MB acting as a texture buffer. The embedded RAM has a very low 5ns latency bus. In layman's terms, this means it's very fast. The combined floating point performance of the Flipper LSI and the Gekko MPU is an amazing 13.0 GFLOPS. What else is integrated onto the chip, you ask?

Interestingly enough, a Factor 5 designed sound processor is also part of the Flipper chip. Of course, you probably know that the lack of a sound chip was one big sore point for the N64. The Gamecube, however, won't suffer from anemic audio abilities like its predecessor did. The 16-bit DSP sound processor runs at 101 MHz and can process a maximum of 64 channels of audio simultaneously with a sampling frequency of 48 KHz. The sound processor can also directly access the 16MB A-Memory, so designers will no longer have to divide processing power between sound and graphics. Jim Merrick from NOA explained the design by saying:

"The A-memory has direct access from the audio DSP (digital sound processor) so that it doesn't cause BUS contention issues on the main memory. Audio has a constant ongoing need for sound satisfaction that cannot be delayed," says Merrick. "Audio has to happen. You can drop a frame of graphics and the world doesn't end; but if you have a buffer of audio, everybody hears it."

We're sure Koji Kondo over at EAD is thrilled with the Flipper LSI. It should offer a canvas much broader than anything he and the other sound designers from around the globe have ever worked with. The big question is, can the Flipper's sound DSP processor handle Dolby Digital 5.1 in real time? Audiophiles might be a bit disappointed to note the Gamecube cannot handle Dolby Digital 5.1. Current sound chips simply don't have the kind of processing power required for such a task, but rest assured that Gamecube titles will have some amazing Dolby Surround soundtracks.

In May of 1999, Nintendo announced their $1 billion dollar contract with computer giant, IBM. The company was brought on board to make a custom designed copper-based processor for the then codenamed Dolphin project. The finished 0.18 micron 'Gekko' microprocessor unit (MPU) caused some confusion, initially. It was assumed the 'Gekko' MPU would be the center of the next-generation Nintendo chipset. As it turns out the IBM MPU plays the role of "Robin" to the Flipper's "Batman". 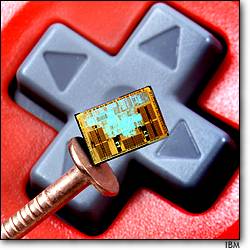 The Gekko MPU is based on IBM's PowerPC core of processors and runs at 405 MHz. The CPU capacity of the Gamecube is listed at 925 Dmips (Dhrystone 2.1) and the Gekko is described as a "game-centric" chip (meaning that it's optimized for one thing and one thing only-- running video games). The 0.18 micron MPU is connected to the Flipper LSI with an external bus that can handle 1.6 gigabytes per second, along with a main memory bandwith of 3.2 gigabytes per second. Nintendo has worked very hard to ensure this set up allows the two processors to work in tandem smoothly and efficiently.

So what's the bottom line? The Gekko MPU gives developers a lot of freedom. Games that demand high-end AI, complex physics, and other calculations can be tackled with the Gekko MPU, leaving the Flipper chip to handle the graphics load. Beyond that, the MPU is extremely compact (it's on a mere 43-mm2 die) and should be cheap to manufacture once mass production kicks in at IBM's state-of-the-art production facility at Burlington, VA.


Gamecube Effects
Like the N64 before it, the Nintendo Gamecube will be optimized to run games with a myriad of visual effects. The spec sheet for Nintendo's new machine lists fog, bump mapping, multi-texture mapping, and x8 hardware lights as some of the effects the machine can process. Of course these figures are a little vague and don't specify exactly what "x8 hardware lights" entails.

The XBox, for instance, can push 8 million polygons per second with 8 local hardware lights. If Gamecube's 6-12 million polygon count is measured under similar circumstances, then the Gamecube stacks up rather nicely with the XBox. There are also reports that the Gamecube hardware can render 8 layers of textures in one pass without a substantial hardware hit. Unfortunately, Nintendo isn't going into detail about the effects package the Gamecube can dish out for the time being. Mario-creator Shigeru Miyamoto wasn't quite so reserved about the chipset, however. The world-renknowed designer offered his thoughts on the Gamecube chipset by saying:

"This is the biggest advantage for game developers on Gamecube, as they don't have to minimise the processing time for special effects. At the show in Makuhari last week [Spaceworld], we unveiled the 1T SRAM technology, and whilst I'm not in a position to boast, this is the world's best graphics chip."

After all the technical mumbo jumbo, Miyamoto-san explains it better than we ever could. Nintendo might have struck out with the Virtual Boy and hit a foul ball with the Nintendo 64, but the Gamecube is a definite homerun as far as hardware goes.
view full archive