View in legacy (desktop) mode
I remember modding my N64 so I could play the original Sin & Punishment. The N64's sad excuse for region locking actually consisted of a pair of plastic tabs that lined up with US cartridges, but not with Japanese ones. The solution: melt them right off with a soldering iron, after opening up the system with a custom-ordered gamebit. Quite an extravaganza for a single game, but man, it was worth it.

Sin & Punishment 2 is a long time coming. The original, an on-rails third person shooter, practically begged for pointer-controls. With the sequel, developer Treasure hasn't strayed far from the series' roots. You still run blasting and slashing through a post-apocalyptic future where mutated livestock ravage the remnants of humanity. Kachi, the female protagonist, is being pursued by a mysterious organization, and Isa, the male protagonist, is trying to help her figure out why. You can choose which of them to play as when the E3 demo begins, and they each have a couple of unique abilities. 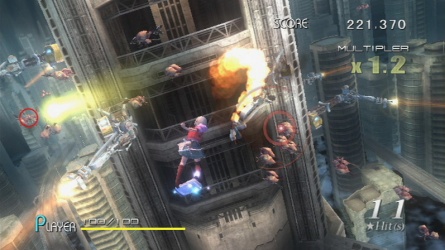 Let's talk controls real quick, though. Holding the B trigger will keep Isa and Kachi's guns (cleverly designed to look like the Remote/Nunchuck combo in Isa's case) firing continuously, while tapping the button quickly will kick off a sword combo, useful for batting down up-close adversaries. You can tap the A button to lock on to an enemy, which will direct all future shots to that target regardless of where your cursor points, or hold the button to charge up a special attack. Z in conjunction with the analog stick will dodge, and C will make your character jump. Double-tap it to start floating in the air, where you can fly around freely with the analog stick.

As I was saying, Isa and Kachi play a little differently. Isa shoots with the aforementioned Remote/Nunchuck-lookin' gun, while Kachi holds what looks like a more automatic weapon. Isa flies with a rocket powered backpack and melee-attacks with a sword, while Kachi floats on a Back-to-the-Future-style skateboard and slashes with punches and kicks. These are mainly aesthetic differences, though. The primary reason to choose one character over the other is due to the nature of their special attack.

Isa's special is a single powerful shot that, where it hits, will explode and take out a group of enemies. It deals fantastic damage to whatever target it hits, which is especially useful against bosses. Kachi's ability is to lock on to several enemies at once, painting cursors over them, and then sending tracked shots out after each. Like Isa's special it's great for taking out groups, but it deals less overall damage to each target. For both characters there's a cooldown period after performing a special attack where you can't charge up another one for a little while. 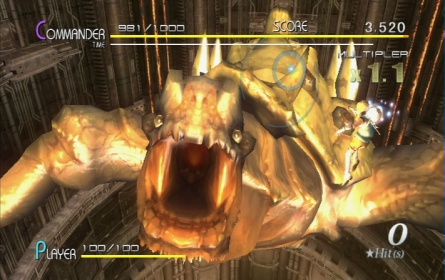 The general gameplay is quite reminiscent of the original. You run ever forward while dodging back and forth frantically and shooting an endless stream of bullets at huge swarms, be they monster or human. Occasionally you'll come across minibosses with health bars that must be overcome to proceed. You can even knock missiles back with your sword ala S&P1, though it seems you have to lead your target this time around in order to successfully land a hit. The hit-chaining of the original has been replaced by a combo system, wherein a multiplier builds as you kill sequential foes, and it'll bolster your score until you get hit.

Basically, if you loved the original Sin & Punishment, you'll love this new one. It's a sequel that doesn't change much, and just expands on the kind of scenarios found back on the N64. Considering the hoops you had to jump through to play S&P1 before it showed up on the Virtual Console, I'll let that sense of déjÃ  vu slide. Sin & Punishment 2 is basically an American re-launch for the series, and with the Wii controls pushing it, it's poised to outdo the original handily.
view full archive