View in legacy (desktop) mode
I may have played the Sonic & Sega All-Star Racing demo at E3 more than anyone else at the show. I played it three times. Sitting right across from the packed Bayonetta demo, Sonic just didn't get a lot of action. None of the demo units ever had much of a line, and by Day Two the first words out of any Sega Rep's mouth were "it's a lot like Mario Kart." Yet, I had a blast. Is this a problem with me, or is E3 just too glitzy for a game like this? 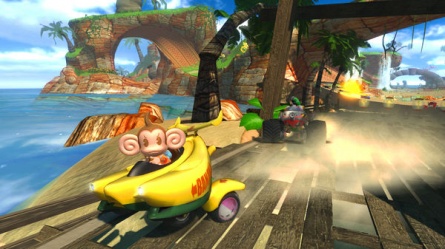 Granted, Sonic & Sega All-Star Racing is a clone of Mario Kart—That's undeniable. You drive around fantasy race courses as cartoon Sega characters and quickly find fun power-ups to shoot at each other along the way. The game mimics Mario Kart right down to its box-like item drops, crazy jumps, secret alternative routes, little beach crabs, and charging power-slides. Fortunately, I'm a big fan of Mario Kart; it's nice to see Sega (or any developer) try to rip off a Nintendo franchise and not fail miserably in execution. All-Star Racing's controls work, and the game is fun.

The demo I played had only four selectable characters, but I saw four others racing against me, and the "Blizzard Castle" course was from Billy Hatcher, so I presume there will be at least nine total characters, probably more. Sonic, Amy, Samba de Amigo, AiAi (from Monkey Ball), Dr. Eggman, Tails, Shadow, and Kit are the only characters I saw. Selecting your character is more like older versions of Kart, since there is no kart selection. Each character has its own custom kart.

Only two race courses were in the demo: "Seaside Hill" from Sonic, and "Blizzard Castle" from Billy Hatcher. Seaside Hill is a typical Sonic level, with a lot of jumps, loops, and shenanigans going on. Blizzard Castle is not as imaginative as you'd think coming from Billy Hatcher, a game about a boy in a chicken suit who rolls around giant eggs that hatch into magical creatures. It was a pretty bland trek through an icy castle. Pick some better levels from your games, Sega. 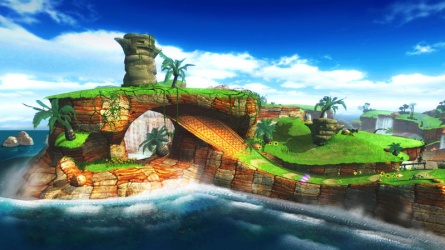 Power-ups are in plentiful supply. You find them in floating question mark boxes, like in Kart. The set of power-ups are all pretty standard, homing missiles, shields, speed boosters, etc. You can also perform tricks by pressing the shoulder triggers in mid-air. If you land a trick, you get a little speed bonus.

The Chaos Emerald super power-ups are the only items worth noting. Like in Mario Kart: Double Dash each character has its own Chaos Emerald power, which is kind of like a Power Star or Bullet Bill from Kart. Sonic ditches his car and turns into Super Sonic; AiAi gets his ball back; and Samba de Amigo entices everyone he passes to line up behind him and party. Chaos Emeralds are a lot of fun, though I wish the rest of the power-ups were as imaginative.

Racing is fun, but my favorite part of these types of racers has always been the Battle Mode, where you blast each other instead of race. I couldn't get a firm answer on if the game will have a Battle Mode, but several representatives I talked to said it is a possibility. Four-player splitscreen and eight-player online play is confirmed.

There have been a lot of Mario Kart imitators over the years. It's practically pre-requisite spin-off for any popular cartoon-like franchise these days. Crash Bandicoot, Chocobo, Pac-Man, Kirby, Bomberman, Spongebob, The Sims, and even M&Ms have had kart games in the last decade. Sega had an older Sonic kart series called Sonic Drift on the Game Gear back in the 90s. None of them, except maybe Rare's Diddy Kong Racing, have been able to match the fun and replay value of the Mario Kart series. I don't think Sonic & Sega All-Star Racing is going to change this, but Sega isn't phoning it in. This is probably the best 3D game featuring Sonic, without Mario characters, in quite some time.

The build I played was for PS3, and had a few frame rate issues that I hope are ironed out. It will ship to all three consoles, including Wii, next March.
view full archive