View in legacy (desktop) mode
If I were to say that The Legend of Zelda: Spirit Tracks is just "Phantom Hourglass on a train," I really wouldn't be exaggerating. Not since Majora's Mask has there been a 3D Zelda that feels so identical to its predecessor. Whether or not this is a good thing, I suppose, depends entirely upon your opinion of Phantom Hourglass. If you were a fan of its look and control, Spirit Tracks could be a right good time.

Our Link this time is an apprentice train engineer, and lives in a world roughly 100 years in the future of Phantom Hourglass. As one might expect, rather than sailing from place to place, Link chugs along in his very own locomotive. While this change means the return of an actual land-based overworld, don't be fooled—you have less control over your travels than ever before. As the first part of the E3 demo illustrates, overworld travel is a matter of choosing between already-established tracks that crisscross the land.

Train control is very reminiscent of the boat control in Phantom Hourglass. You have a lever on the right side of the screen that, via stylus input, can be slid between reverse, pause, go, and extra-fast-go. By dragging the stylus across the screen you can rotate the camera, and tapping away from the train fires a cannonball at the point of contact. A seemingly-superfluous but surprisingly-entertaining addition to the interface is a dangling rope that can be tugged to blow the train's whistle. It'll scare animals off the tracks so you don't collide with them and damage your train, but also serves to titillate those who entertain even the vaguest of railway fantasies. 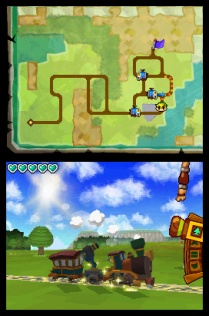 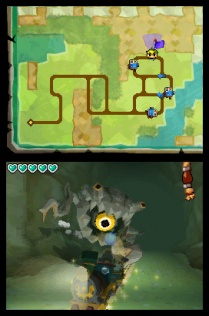 Train travel consists of firing at various obstacles, be they rocks on the track, rocks off the track (for rupees and hearts), or small swarms of boar-riding bokoblins. When you come to a branching path you're given the option of switching one way or the other, which, in the demo, sends you through either a skulltulla-ridden forest or a tektite-laden cave. Later on you're tasked with navigating a grid of tracks and managing your speed in order to avoid other engines that will kill you on contact. You complete the train portion of the demo by warding off a giant spider—Ghoma, no doubt—that pursues you as you travel through a cave.

For most of the game, of course, you'll be trudging around on your stumpy little legs. I won't dedicate much exposition to Link's own controls, as they're literally identical to Phantom Hourglass. He'll run in the direction you hold the stylus, attack if you make a slashing motion, or target particular enemies by tapping on them. Inventory and menu options live at the bottom of the screen (slots for 7 items and 2 potions), and item usage is tied both to an icon in the upper-right of the screen and the holding of the L button.

The new item featured in the demo was the "whirlwind," a propeller-looking contraption that you aim with the stylus and point towards anything you want blown away. I had no end of hell trying to get it to work during the show, as sometimes it would fire bursts of air right away, other times it would wait for my input, and still other times it wouldn't react at all. Only after reading the Nintendo-provided fact sheet while writing very this article did I realize that the whirlwind blows when you blow on the DS microphone. The din and clamor of the show floor must've been responsible for its poor performance—surely it'll work better under less cacophonous circumstances (much to Matt's chagrin). 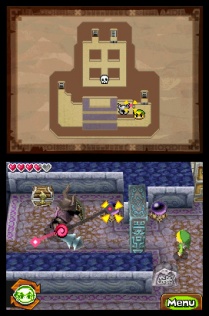 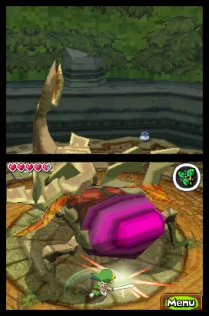 The most notable system in the demo was that of the controllable phantom. These darknut-looking suits of armor were invincible assailants in Phantom Hourglass, but return in Spirit Tracks as controllable allies. The dungeon demo is full of puzzles that you solve by drawing a path for the phantom to follow, be they synchronized switch-hitting, enemy distracting, or ride-on-shield-through-lava...ing. You can swap camera focus between the Link or the phantom with a button in the lower-left of the screen, and determine the phantom's path by drawing a line out from his center. It's anyone's guess whether or not this will be a game-wide mechanic, but judging from the phantom's prominence in the official art, I'm thinking yes.

The final part of the demo was a boss battle versus a gigantic stag beetle. They prep you for the fight with an introductory area featuring toxic smoke that you blow through with the whirlwind, and little grubs that turn into bombs after you hit them with your sword. Both constructs are paramount in the boss battle itself, with toxic smoke needing to be blown off its hindquarters before you can attack it, and grub bombs that you need to blow at the beetle with your whirlwind during its second phase to knock it out of the sky. Really, it was quite similar to the fight with Cyclock (a giant octorok) in Phantom Hourglass.

"Oh that's just like Phantom Hourglass" turned out to be a recurring theme during this demo. To be fair, we've only been given a look at raw gameplay ideas, not any kind of structure, so things could end up pretty unique in the end. Majora's Mask was great not because it aped Ocarina of Time's style and interface, but because of fantastic dungeon design, artistic direction, and how it turned the overall game's structure on its head. We'll have to see what direction Spirit Tracks goes in as it nears its release date later this year.
view full archive