View in legacy (desktop) mode
Man I have been pretty into these Crystal Chronicles, let me tell you. Square-Enix's "Final Fantasy for those Nintendo things" has tickled my fancy for years, with a charming world that oozes both charm and world. Needless to say, I've hung on every scarce bit of Crystal Bearers info as its trickled from Japan's clenched fist. Over the last few months, though, it's become increasingly evident that while the world of Crystal Bearers might be familiar, what actually goes on in it is a whole new oyster. I was very eager to give it a spin at this year's E3.

What I got was basically the first half hour of the game, unskippable cinematics and all. Unskippable cinematics that I couldn't even hear, owing to the dull roar of the show floor. "Thanks, E3." I had read up on enough to be able to frame the goings-ons for myself, luckily. Crystal Bearers takes place long after every other FFCC title (confirmed in a recent interview with the director), and the Yuke race has long been wiped out by the industrious Lilties. What's left is a world powered by crystal technology and mystified by super-powered crystal-bearing Crystal Bearers.

The demo begins as Layle, the titular bearer himself, escorts an airship that finds itself soon accosted by a gaggle of dragons. You start playing for the first time in one of the The Crystal Bearer's many event-based minigames, using the Wii Remote cursor to fire at the dragons as you free fall through the air. Layle's a bit full of himself, see, and revels in the crystal-borne telekinesis that allows him his fame. You don't have to kill all of the dragons, and you could probably even get away with not killing any of them, as it seems the event ends after a set period of time and awards a score based on your performance. 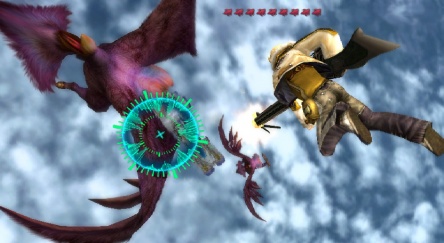 Layle soon confronts Amidatelion, who's not only another Crystal Bearer, but also a remnant of the presumed-extinct Yuke race. She shows off her ability to teleport anything around her via tiny portals before escaping and leaving Layle to pilot the ship through a canyon on the way back to the Lilty city—which starts the second controllable part of the demo. Your viewpoint is within the ship's cockpit, and you turn the wheel by pressing left or right on the Nunchuck's analog stick. You really have to start a turn early, and from the outside, in order to lumber around a variety of tight corners without crashing into the walls of the canyon. Like the dragon event, however, it seems that you can't actually fail, no matter how many walls you incompetently grind up against.

After crashing through a structure and screeching to a halt in front of the city, you finally gain control of Layle in the manner you'll be controlling him for the bulk of the game. The analog stick is used for running around, and shaking the Wii Remote prompts a fancy-looking dash. The Z button will center the camera (which is also freely adjustable with the d-pad) when tapped, and can be held to enter a first person view where you can strafe around.

The big idea in The Crystal Bearers is that there's no transition between town wandering, field exploration, and battle. There's no sword that stays sheathed around townsfolk or targeting reticule that you can only use on enemies. You interact with the entire game world in the same fashion—with Layle's omnipresent telekinesis. 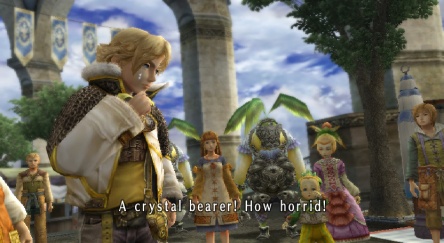 It's a simple mechanic, really. Point the Wii Remote's cursor at any number of things in the game world—be they foes, boulders, or townspeople—and hold B. Depending upon the weight of the item, you'll either gain control of it immediately or have to keep the cursor steady over it until a circle-gauge fills up. This is where the mayhem begins. Four arrows will appear around the reticule, and those that are green will indicate the direction in which you can shake the Wii Remote to affect your hapless target. Shake forward (down), left, or right to fling whatever you're holding along that bearing. Shake backwards (up) to pull lighter items towards you, and hold them over your head. You can then run around with them until you shake the Remote again to throw them.

You can use this power to affect many things in the town, such as activating a broken clock or saving a Lilty guard from underneath a large boulder. You actually get little "achievement" notifications for every task you accomplish in this fashion, though it's anyone's guess as to whether or not those will be collected somewhere. More entertaining, however, is your ability to grab and toss literally every person in the town. The guards will come after you if you go too crazy, getting in your way and knocking you down, assuming you don't also just blow them away. Crystal Bearers don't take no crap from no punk-ass sprout-heads.

The city is gigantic, by the way. You hop on a train at one point and, assuming you resist the urge to just decimate everyone on board, you can look around outside and appreciate how much of the city has been painstakingly rendered. At the end of the track you'll come across Althea, a Lilty princess whose white ferret swiftly absconds with your crystal. WHAT A RASCAL. After chasing it down and grabbing it, perhaps also knocking Althea to the ground and robbing her in the process, a series of events transpire that end with you fleeing the city with a Selkie woman named Bell—the Lilty guards hot on your tail. I wonder what kind of behavior could have possibly prompted that.

The final part of the demo focuses on your flight from the city, as Layle defends the back of an escaping carriage in an almost Majora's Mask-esque fashion. Guards on chocobos bear down on you as you attempt to grab them and toss them wildly into the air. The chocobos actually have considerable resistance to your telekinesis, and they move around a lot, so keeping the cursor on them long enough to actually grab hold can be pretty tricky. If they get too close, a sword-clashing minigame starts where you overpower their riders by quickly shaking the Remote. There are several points where you can actually grab onto the scenery and collapse it upon your pursuers, earning achievements each time. Then Layle falls off a cliff and the demo ends. Whoops.

There's quite a bit of variety in this brief intro to the game, be it thanks to an assortment of different minigame events or just the free-form and wanton destruction you can wreak upon the denizens of the game world. I'm pretty interested in seeing where the plot goes, and am excited to explore what appears to be an impeccably crafted world, despite how differently it's put together in comparison to past Crystal Chronicles titles. The notion of Final Fantasy meets Grand Theft Auto is an appealing one.
view full archive