View in legacy (desktop) mode
There really needs to be a better way to inform people when there are new DS demos available on the Nintendo Channel. Case in point: I might have missed Elebits: The Adventures of Kai and Zero if I'd not been seeking out info on the title as its release approaches. 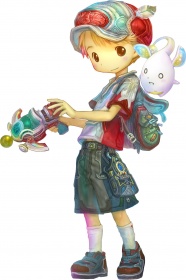 This new Elebits isn't much like the Wii title; it seems to have a lot more in common with 2-D Legend of Zelda outings—looking in particular like the GBA's Minish Cap—than the furniture-tossing title that graced Wii in its early days. In the demo, I controlled protagonist Kai and his tag-along Omega Elebit Zero (as well as a later-acquired Fire Omega, who I could control to breathe fire on burnable obstacles), working through a number of simple environmental puzzles.

As I went along, I could capture familiar Elebits to earn wattage, which I could then use to power various gadgets and perform actions. Capturing was particularly neat; while some Elebits appeared randomly, others required you to lift rocks or shake trees with the stylus to expose. Once they were out in the open, I could stun them with the stylus and then tap Zero to capture them, earning bonus wattage for sweeping a bunch at a time.

The game gives the option to control with the d-pad and stylus or just the stylus; I found the latter option to work best. (Cam liked the d-pad option better; seems to be a preference thing.) There was the occasional control glitch, but for the most part operated smoothly and was fun to play. The end of the demo hinted at a ton of content, some of which you can see in the media we have posted. Today, I've gone from "is this game worth playing" to "I think I need to check the full game out". It seems... promising.
view full archive