View in legacy (desktop) mode
Perhaps attending GDC sessions early does indeed bear interesting fruits. Much to my surprise, this happened today as I sat down for Richard Evans' talk entitled "Modeling individual personalities in The Sims 3."

Richard Evans is an AI Specialist working at EA/Maxis on the Sims franchise, so it would make sense that he had some unreleased materials floating around his computer. As he was preparing his laptop (while plugged into the audience facing screens) the entire room got a look at the folder shortcuts on his personal machine. 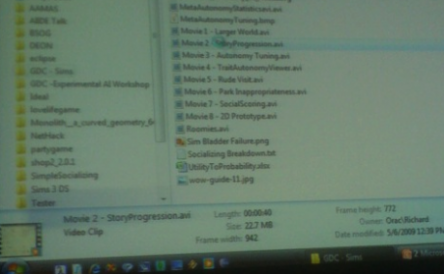 While he was loading his PowerPoint slides, I was frantically reading folder names to try and see anything interesting. Well, there was. A folder entitled "Sims 3 DS" was nestled in between a few nondescript folders (SimpleSocializing and Tester).

As of now, there has been no word that a true Sims 3 title had been in development for the Nintendo DS, and while this isn't an official announcement, it's at least a confirmation that they're actively working on something in the Sims 3 universe for our beloved Nintendo handheld.
view full archive