The original Rune Factory
It was my first venture into the world of Harvest Moon: a spin-off that seemed calculated to try to leverage the old franchise in new ways. It mixed action-RPG cave exploration and monster battles and a fantasy story into the idyllic farming sim formula, a notion that elicited a good amount of "wha?" It certainly looked like nothing Harvest Moon had ever offered before.

There are two more games coming out in the striking-out-on-its-own series soon, one more for Nintendo DS and a positively beautiful-looking piece of work for Wii. I've come to the conclusion I can't afford to miss either.

Rune Factory: A Fantasy Harvest Moon took to the shelves around the same time as PSP spin-off Innocent Life: A Futuristic Harvest Moon, suggesting that series producer Marvelous was exploring ways to expand the series' influence outside the plethora of samey-looking sequels that hit Nintendo platforms year after year. I picked it up partly out of curiosity about the mashup, partly out of a long-simmering desire to hack and slash some monsters in a portable action RPG. I came away impressed.

Rune Factory certainly has the Harvest Moon heritage firmly impressed upon it. While you start off the game fighting a monster off your new farm with a hoe rather than tilling the ground, you'll quickly settle into the farming routine. But beyond your farm and your town is a bigger story revolving around huge caves to be explored with monsters to defeat (or tame, if you'd like some help on your farm), precious stones and metals to mine, and fair weather plots of land therein. And while you're doing all this, you can't help but notice that the scenery is all positively beautiful.

Rune Factory 2
Rune Factory's theme is gaining power through living in harmony with the land. This is manifested in little white balls of energy called runes, which appear daily among mature crops. Every move you make, from swinging a sword to swinging a hoe, uses your Rune Points, and at the outset of the game this really restricts what you can do. The intended strategy is that you'll start planting crops in caves, not necessarily for harvest, but to pick up the daily runes that appear and recharge your Rune Points, giving you the strength to tackle the caves in their entirety. It's a neat concept that's a refreshing change from the old potion grind.

What really makes Rune Factory shine, though, is the sheer number of things to do. You can and should get your farm up and running and conquer caves, of course, but you can also do things like befriend and eventually marry townsfolk, craft accessories and forge weaponry, and do some cooking—some of which is drawn from the Harvest Moon heritage, making the game a much more well-rounded affair than your garden-variety action RPG. Although I've technically beaten the game, I'm still working towards forging the obligatory Ã¼bersword—a process that involves heading into dungeons, fighting monsters and mining to get materials, and heading back to my forge at home and working on various weapons and tools to get my level up.

Now, the story itself isn't going to win any awards, though it does the job getting you from cave to cave, where the real meat is. The original game had a few pretty serious problems, too—in particular, an obtuse interface and atrociously low monster drop rates. Thankfully, I found them pretty easy to overlook, but it sounds like I won't have to down the road: Rune Factory 2 has, according to those who have played the Japanese release, resolved these two key thorns in my side.

Rune Factory 2 sounds like a pretty sweet upgrade all-around, actually. A quest board has been added in-town where you can accept jobs, to keep you driven above and beyond your own desire to level up crops to fetch obscene prices. New skills in combat as well as smithing and the like are learned at schools you must build instead of just from books from the library; monsters you befriend to work on your farm must be trained here as well. There's even an intriguing change that made me think of The Legend of Zelda: unlike the original Rune Factory, where you needed the mayor's permission to enter each new cave in sequence, you're free to enter any cave at any time. That kind of game openness in 2008 strikes me as very cool.

All this and it appears the already beautiful artwork has been kicked up a notch. 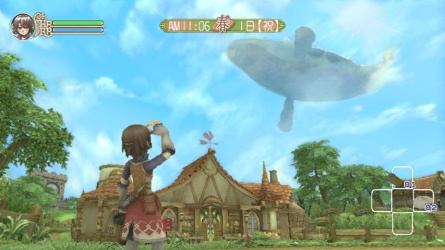 Cloudy with a chance of flying whales: Rune Factory Frontier
Rune Factory Frontier, out for Wii early next year, has also caught my eye. Marvelous' partner U.S. publisher XSEED, taking the reigns from long-time Harvest Moon partner Natsume, is bringing this title to the U.S. come early next year. Built by the same developer behind the DS entries, Frontier features what looks like even more beautiful landscapes, an intriguing theme (islands on the backs of freakin' flying whales), elemental nature spirits that appear instead of runes when you work the land, complete with their own intriguing systems, and a town that expands as you are successful on your farm. There's not a whole lot that I've been able to find out about the game yet, but every little bit and piece that has come out has me intrigued.

I don't know if I can safely recommend Rune Factory to those who are just plain tired of Harvest Moon, but as a newcomer to the franchise, I found the Harvest Moon influence transformed what would have otherwise been a somewhat simple action RPG into something delightfully unique. Though it sounds like the two themes of farming and fighting would be like oil and water, they really fit together rather well. If you're looking for something to play on your DS, head on down to the store and pick up the original Rune Factory now, and if it turns out you like it, get those sequels that are just around the corner. I certainly plan to.
view full archive