View in legacy (desktop) mode
The news has been very slow to get out that I am pretty much retired from gaming writing these days. Perhaps it should come as no surprise then that I received a lovely care package from Namco Bandai's PR agency a handful of weeks ago containing Go Vacation for the Wii as well as an assortment of themed press gifts inside: golf balls, a beach ball, and other vacation-themed stuff.

So I put it in, handed controllers around to the family, and gave it a spin. I'll say it right now—I am not a fan of this game. I hate excessive, slow travel (which this game's much-vaunted "open world" has in spades), and the minigames themselves, while some work out alright, are nothing that could be mistaken for Wii Sports. But my nine-year-old daughter has been magnetized to it. So I told her hey, you review it. And so, being no stranger to the N-Sider review circuit, she did...

Go Vacation is fun for the entire family. It could be recommended for kids, but there are things adults might like too. 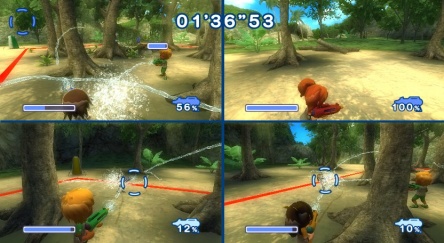 One of the things I like about this game is the achievements. One day I was totally not doing so well at roller-skating and I ended up getting an achievement for falling 50 times. Also, I liked that whenever I brought my dog, Steve, along to places close to secrets, like treasure chests, he'd bark and put an exclamation mark over his head.

Something that you should know, this game has four resorts and a Villa Grounds (which I will explain later.) The four resorts are Marine, City, Snow, and Mountain. There are 20 stamps to earn when you start. After that, earn every stamp in every resort. (I haven't earned all of the stamps yet, so I won't spoil it for you.) 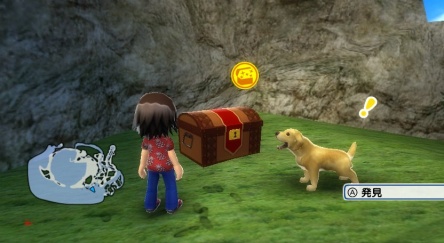 Now I will explain the Villa Grounds. When you get 20 stamps, you will be warped there to see your new villa. It's up to you, so explore inside then outside or the other way around. When you take a look at your villa from the inside, it's bigger than it looks! Plus, when you are outside, go to the hard-hat lady. She will let you remodel your house. Remodeling is taking out, moving, or putting new furniture in your villa. Next to her is a person who lets you borrow a dog. Also there are Miis all around Villa Grounds. If you want, you can invite them into your group.

Now for what I don't like, the flaky controls. When I ski uphill, I sometimes turn over and start walking sideways on my skis. Trust me, I did not like that. Also, I didn't like when I turned sharply but it came out as a slight turn.

Like I said at the beginning, Go Vacation is fun for the entire family, single or multi-player.
view full archive