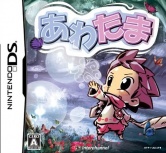 One of my absolute favorite games on the Nintendo DS, Soul Bubbles, has made its appearance recently over at Famitsu—it's finally headed to Japanese shelves, rechristened Awatama.

It's not exactly the same game we got in North America and Europe, though it's not a new game either. The biggest change you'll note, of course, is that the main character is completely different.

Mekensleep's Olivier Lejade and Omar Cornut were kind enough to answer a few questions for us about the new release, including what's behind the new look of the little spirit herder.


The most obvious change here is the new character. Can you speak to his design a bit? Is it purely a Japanese-market thing, or does it rreflect some changes you wanted to make—or both?
Olivier Lejade:The new character design is primarily an effort to appeal to the Japanese sense of taste and aesthetics.

I've had many opportunities to verify that the Western version's character did not cut it in Japan. So when our Japanese publisher asked if it was possible to change it, we agreed it was a good idea. They went through a number of 2-D designs before settling on the final one which we then modeled in 3-D and implemented in the game.

I'm really excited that Soul Bubbles is coming out in Japan! After so many years of playing great Japanese games I feel proud and honored that our baby is invited there.
I understand there are some "tweaks" to levels; how extensive does this get? Do you have any examples?
Omar Cornut:We tweaked some things but they are for most extremely minor changes. Some reworked level curves, fixed a few "holes", did some interfaces tweaks, fixed a gameplay bug that affected left-handed players, etc. but nothing to hold your breath for, seriously.

We increased the number of calabashes required to reach Agartha to 70, because players who skipped the harder fourth and fifth levels in each world usually faced too much of a difficulty spike in Agartha, and it also tends to increase the game duration for those players.

Finally we added a second save profile to the game, as requested by many players. We really wanted to get that inside the original release but only thought about it late in the process and it was too late for QA to accept it into the build. It's my fault and I really wanted to have it fixed for the Japanese release!
Is it easier to get that last calabash in Agartha now? (grin)
Lejade (to Soul Bubbles Team):See, see?! Nobody ever listens to me! (grin)
Cornut:Yes. There was actually a hint at the location to go for but very few people noticed that. We made it more noticeable. It's still a little unfair though, sorry.
Honestly, I have a hard time faulting you for it, I loved the rest of the game so much.

How did the Interchannel publishing agreement come about? Were you looking around, did they come to you, etc?
Lejade:We had reserved the distribution rights for Japan on the belief that we needed a local publisher if we wanted the game to be well marketed there.

Around the time I went looking, Interchannel tried contacting us and I've had a very good relationship with them... so it happened.
A friend of mine in Japan who admittedly is still rather a novice at the language says Awatama translates loosely as "Bubble Shot", though "awa" also means the head on a beer... what's the official word on what it means?
Cornut:The guys at Interchannel found this name and we are very happy with it.

Awatama is a contraction of the two words "awa" (泡, "bubble") and "tama"/"tamashii" (魂, "soul"/"spirit"). It is the same character as in Katamari Damacy that we all love to love.
What else are you guys doing these days?
Lejade:I'm working on a prototype which I hope will turn into
Mekensleep's next game, but it's too early to say much more.
Cornut:I am presently working at Q-Games in Kyoto, on PixelJunk 1-4 for the PSN.
Thanks again to Olivier and Omar for answering our questions. Awatama should be coming out later this month, but those of you living outside Japan can pick up Soul Bubbles now—often at a good price; $20 is typical in the States—right now. It's also been making its debut around the world, so look for it!
view full archive