View in legacy (desktop) mode
Always dreamt of being a tiny child with limitless disposable income living in Japan in the early 1990s? Get all teary eyed whenever you blow on something to clear dust away? Trained yourself to stop shaking the controller around even though it is now required to play games?

Bathe yourself in the murky pond scum, the foul run-off from the showers of the games history has forgotten, impossibly filtered through the purifying coal called English by depressingly devoted fans and hobbyists! Fan-translated games that will make you scrub your feet with lye, jump on broken glass, and emit, as through the hellthroats of your four mutated necks... 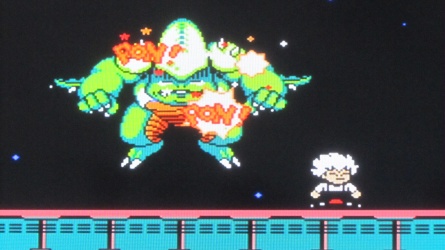 The story goes, or so I think, that I'm Kid Dracula! as the title suggests. This game being a spin-off of the Castlevania series of games (called Akumajou in Japan), I like to assume that this means I am actually Dracula, but merely at a younger age, as opposed to it meaning that I am Dracula's son, birthed of illicit relations with some manner of Transylvanian whore. At any rate, there is no Adult Dracula to be seen, so I'm either the Real McCoy or I have a delinquent father. The game opens with a useless cinematic in which I, Kid Dracula, am depicted standing atop the roof of a castle. Presumably I inherited it from a predecessor, or perhaps won it in a contest, or maybe they just hand out castles in "Castle Vania" or where ever, here is your castle, welcome to the vania of them. I do not know, okay? Later on, I actually emerge from my bright green coffin and set out "to do my business." This is usually what I call it when I need to use the potty.

Generally, I am an immobile little wad, with a jump that would shame only a bowl of soup. My eyes are locked in a perpetual, joyful squint, because I am just so happy. At the beginning of the adventure I am an upstart, would-be philanthropist, ready to give my all for the greatest of causes. This optimistic outlook on life does not stick with Kid Dracula, who I am, for long. At the end of the first stage I am assaulted by a ghost. I suppose it is a mere coincidence that he is dressed in white robes and wearing a hood with tiny eye holes that bears a swastika on it. "Oh, but Brandon! One of the levels in Zelda was a swastika." Soft, dear reader—none of the enemies in that game are modeled after supremacist terrorist organizations except the Like Likes who really hate flat objects. Anyway the ghost bounces into me like an idiot a few times, and every fucking time I die I have to go back so, so goddamned far. I begin to sense the joy in evil as I lop his head off with my magic powers. With the aid of my sippy-cup lid, I suck the goop out of him. 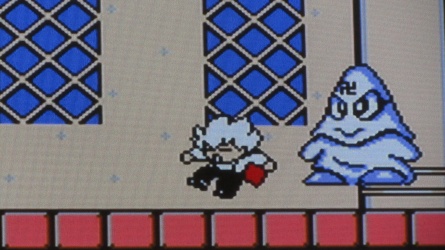 My magic powers, which awaken in me with each level cleared, allow me to obtain a skill from time to time. These run the gamut from an attack that seeks out enemies to a skill that lets me fly to one that lets me flip upside down. Mostly these are useless except for tiny parts in certain levels that would be impossible to beat without them. In a water portion of what, level three, I stop to kill endless weird eels with my homing shot and take their coins. Why do I do it? Cause I'm the goddamned Kid Dracula, and I gotta have that grip. I stop just shy of a hundred, to show some mercy, because I am a compassionate little bitch with white hair. Compassion is a trait I have picked up from watching Rugrats videos by myself and crying until I go to sleep alone in my empty castle where nobody loves me.

After each level ends I play one of four random bonus games—this time it's the silly slot machine betting game and I win 25 extra lives thanks to my enormous amounts of money. It is a good thing because the piece of crap level afterwards burgers my ass raw.

I am definitely trapped inside a Castlevania game: one hit knocks me into a brain-dead, hobbled stupor, and I find myself bouncing around like a moron right off a cliff. One place the game restarts me is on the edge of an icy ravine, with a man charging at me. I take a hit and die instantly, punch-drunk fat-headed animated wombat face crashing into black icey nothingness. If I jump him, there's another goddamned one of them, ready to give his own life to make my job just a bit more fucked. It is from this point forward that the game decides it's time to make me hate being alive.

By the end of the ice stage I am ruthlessly murdering human female ice skaters, and I begin to realize how these devastating childhood events shaped Kid Dracula! into the Adult Dracula! we know today.

At the end of the fifth level, I encounter the human Lady Liberty, who is the Statue of Liberty, but a three-foot woman, who is alive. I had planned on pillaging her supple body the moment I saw her. But then she tells me she can't fight, and instead we will square off in the most American, reasonable way: a quiz game. 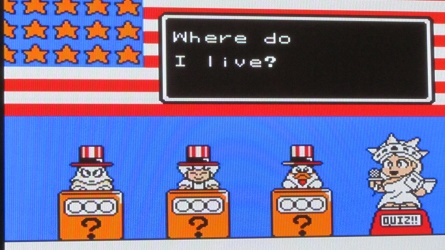 Matching wits with the world's leading thaumaturgic idea-fishermen—another one of those KKK guys and a mother fucking chicken—I slaughter her in my new favorite way: with the force of knowledge. It is not depicted on-screen what happens to her after I triumph—I like to leave it to my imagination, which has been corrupted by an eternity of solitude and the insatiable thirst for the blood of mortals.

The hardest part of the game, an automatically scrolling elevator to space, exacts its brutal difficulty upon me, and I return mentally to a state of murderous rage. Fourteen years later, after I reach the top at goddamned last, I fight a strange fire lizard who makes me question my own sanity. I slip in and out of consciousness, faced with the unending. After succumbing to the stupid lizard a dozen times I ask him, hey lizard, let's fight it out like men, let's do this with a quiz battle. But he does not abide, so I freeze his face off and emit the cry of the infant gods locked in a frozen struggle for the world's last remaining breast, giant and baglike, swinging pendulously from the heavens, before tenderizing his entire corpse to make my dinner. I polish my teeth with his bones and take a dump in my wittle diapey. 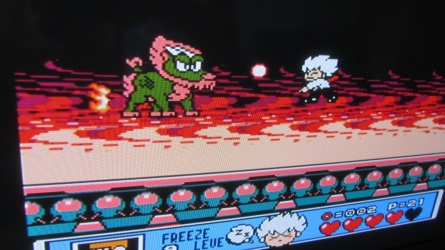 After I'm fed, I die on the stupid spikes right outside the place, an action for which I am bestowed the honor of fighting the lizard again, as though he has forgotten, as though he does not recall the pain of my icecubes penetrating his face, "it's cool dude." Later, once I pass those spikes, I die on more, but different spikes, and receive a double honor of fighting the lizard once more. Once I kill him I rip off his genitals and fashion a small carry-case; this is used to store the teeth I have snapped out of my own mouth as self-punishment, soft but resistant like fresh carrots.

Later I fight a robot head then this winged dinosaur ape-guy whose mouth I have to shoot fireballs into to damage. I have never shot anything up before in the entire game, I did not know you could shoot up. It doesn't matter anyway, because eventually I slam my fireballs down this rotten jerk's throat and take the goddamned throne, as though I somehow was not already the owner of a fucking castle and needed another one just to show off. 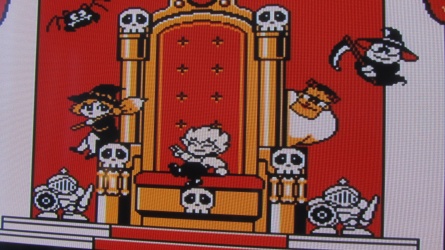 Hey nice job Kid Dracula, you did it. Now throw out your Raffi tapes and grow up to be a big boy, steal men's souls, make them your slaves, and get killed by the Belmonts a thousand times. It is no wonder you will come back from the dead in every new game, because you sure had plenty of practice dying against cute turtles and witches, and an elevator to space. What are you gonna do with that castle now that you have so many new friends? I suggest turning it into an obstacle course of unspeakable horrors.

This game was patched for English text in November of 2007 by Vice Translations. You can read more about their work here. 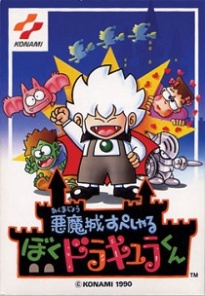