View in legacy (desktop) mode
Our inaugural E3 event was Microsoft's inaptly-named "Project Natal for Xbox 360 Experience." We certainly did not experience Natal, but we experienced something, all right. Read on for our views on the event. 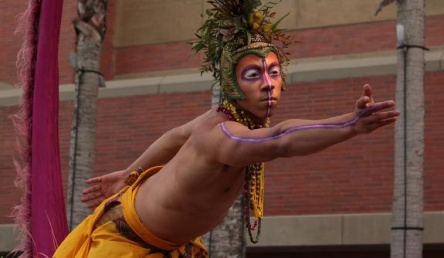 Dean: There has to be something about kicking off one of the most anticipated E3 shows in recent memory and the pressure it must have on a company such as Microsoft. When Project Natal was first unveiled, it was a thing of mystery—nay, wonder. It was something I wanted to try, and it made me think about what it was to play a video game. I can safely say that after tonight, all those hopes and wonders were nullified.

When I heard Microsoft was doing a dedicated event for Natal, I figured they had something worth showing. Instead we got an entirely scripted evening of families playing party games that have little to no appeal due to their extremely derivative nature. Nothing about Natal's offering seemed genuine or original, particularly when the scripting went so wrong. Absolutely nothing shown was in real-time, and when they attempted to mimic what was happening on screen, it had all the believability of twins trying to match each others' movements in a mirror.

Couple the above with canned applause put over the speaker system to make it seem like people were genuinely impressed by the creepy avatars playing a Wii Sports knock off, and you've got yourself a pretty decent picture of what happened tonight. Everyone seemed bummed about the entire thing, and I am too.

I have one thing to say to you, Microsoft: you had better hope you can turn this shit around; you've hyped this thing up so much and it fell horribly flat tonight. I can't imagine anyone was happy with what they saw, and I have a hard time believing you're truly happy too. Hopefully E3 can only go up from here. 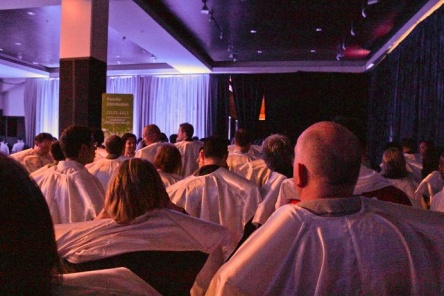 We drank the kool-aid, yet somehow survived.
Amber: After an hour and a half of standing in line followed by another hour of sitting and waiting, Natal needed to be hella impressive to make up for my aching feet and back. Starting the "Natal Experience" by dressing me in a white sheet so I could participate in their Xbox light show didn't sweeten my mood. You'll have to forgive me, I'm running short on sleep here so I may struggle to be coherent but I think I can sum up my experience in a single word: bullshit.

The show lasted over an hour but honestly, I couldn't tell you much about Natal because everything we saw was scripted. It was around ninety minutes of window dressing and high concept demoing writ large in deafening music, giant screens, and performers whose movements were mimicked twitchily by their digital doppelgangers. At least that was the impression the performance was supposed to convey. The games we saw looked like Microsoft branded Wii Sports with a splash of Mario Kart, except instead of waggle you flail at the air. I wasn't exactly impressed. Well, at least I got a plush tiger out of it. Oh yeah, and the fake elephant was cool. 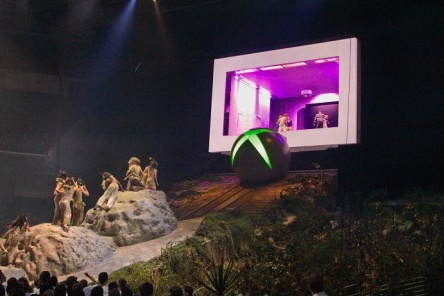 Perhaps the only interesting thing all night.
Matt: We were promised an experience, and we got one, all right. It seemed fairly promising when we were still waiting outside the Galen for our chance to file in, but when they filed us through a TV-shaped hole into a living room with actors playing a family and ordered us to put on the Cult of Kinect robes—robes whose significance really sank in when the giant Xbox logo lit up and the LEDs sewn into the shoulder pads glowed green in kind—I knew something was horribly wrong.

Eventually, though, I just had to laugh. Between the glitchy Avatar reels running before the show and the obvious sync problems with the scripted videos, there was just so much B-grade cheese going on that I found I was really enjoying myself. Every now and again I'd catch a glimpse of a little game or application on the reels that seemed kind of interesting, but then they'd turn around and smother it with overlong, overproduced presentations or something just plain weird. I expect that when I look at the little stuffed leopard cub they gave me on the way out, I'll have plenty memories of hilarity to look back on. Natal—excuse me, "KINECT"—may not fare nearly so well. I wonder how the public will react when they get to see this insanity tomorrow?
view full archive