View in legacy (desktop) mode
To put it charitably, Wii has been quite starved for RPG content. That's not to say there aren't a lot of good games on the console, many in unique genres, but the venerable RPG has been hardly present at all.

Ignition aims to change that in just a handful of weeks with the release of Arc Rise Fantasia, the first console outing from DS and PSP developer Imageepoch, who was responsible for the Luminous Arc series as well as this year's Sands of Destruction. We've been waiting for Arc Rise a very long time—it's already changed U.S. publisher hands once—but now it's finally making its way here. In anticipation of the release, we posed a few questions to publisher Ignition, as well as some of the Japanese staff involved in making the game, about it and the localization process.


Matt: Thanks for taking the time to talk with us about Arc Rise Fantasia. It's been a title that I've been personally interested in playing for some time, glad to finally see it coming here. What was it about Arc Rise that attracted you at Ignition to it?
Ignition:We're very glad to have this opportunity and introduce a genuinely compelling JRPG to the US market. Arc Rise Fantasia encompasses everything that makes JRPGs such a unique and well-loved genre. It has interesting characters and story, but also draws upon a very specific kind of humor and drama that's specific to JRPGs. There's simply a lack of JRPGs for the Wii and we jumped at the chance to bring one to the platform. 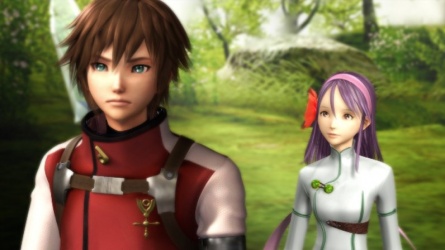 Matt: I understand that the team that made Arc Rise has some vets from the Tales series. I got into that series myself with Symphonia and Arc Rise's themes evoke memories of that series. I know the battle system isn't Tales-like, of course, but do you think it's fair to say there's some influence there?
Hiroyuki Kanemaru, Imageepoch:It is absolutely fair to say it. The battle system is different and it makes it feel different from Tales.

We weren't making the combat different from Tales for the sake of making it different. However, we do love the Tales series very much, and are proud to be mentioned alongside that series. I would say, the thoughts and methods of the Tales series is definitely alive and well.
Cory: What is it that you feel distinguishes Arc Rise from other RPGs on the market? What differences can we expect from the traditional RPG tropes?
Ignition:Arc Rise Fantasia delivers a definitive JRPG experience on the Wii. Looking at the Wii's currently library, there really aren't too many classic RPGs to choose from, as a gamer. And it's an even harder search to find a quintessential JRPG experience on the Wii. What Arc Rise Fantasia offers is that classic experience filled with all the action, drama and humor that players expect from a JRPG. On the Wii, this is definitely a unique title. 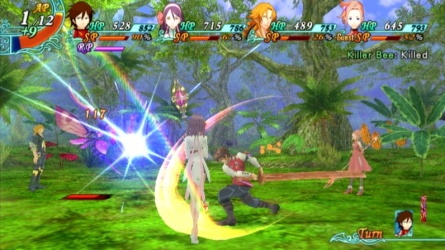 Matt: The first thing I look at in an RPG is its battle system. It's a unique take on the classic turn-based system, as I understand it. Can you explain further?
Ignition:The Trinity battle system combines the skills of your party to unleash massive offensive strikes against enemies. Some bosses might seem very tough to beat, but you will be able to defeat them with tactics and strategy rather than just leveling up your characters. Discovering how to defeat these bosses strategically is half the fun. Certain characters, for instance, perform better at long range and will need to be pushed toward the back of the battle. Other characters who specialize in healing will need to take advantage of the automated systems, enabling them to string together healing spells while the melee characters move toward the front of the fight and take the brunt of the damage for their party.
Cory: Arc Rise uses voice extensively during dialogue sequences. Have all of these sequences received English voice equivalents, or are there parts where the Japanese voices have simply been removed, leaving only the text?
Ignition:The Japanese VO has been replaced with an English language track. Not all text has VO, but most of what you'll see in terms of cutscenes and story sequences do benefit from an English language track.
view full archive