View in legacy (desktop) mode
I know, I know, you're all playing Super Mario 3D Land. (Actually, I am too.) But Nintendo tossed out a little something-something last Thursday that was pretty interesting, and I am writing at you here today to explain it to you so maybe when you're done stomping turtles and slashing at things you might see if it's up your alley.

What exactly is Freakyforms? Is it an art tool? A platformer? A virtually endless source of Animal Crossing-esque silly quests? Another in-vain attempt at making people like AR for more than five minutes? Something else I will never be able to StreetPass throughout the godforsaken midwestern metropolis in which I live? A Colorforms trademark lawsuit in the making? Surprise! It's actually all of these (except maybe possibly the last one), and more! But not much more. 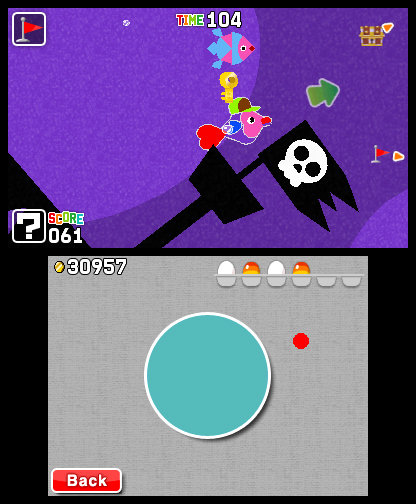 Freakyforms: Your Creations, Alive!, which is already distinctive for having a longer U.S. title than the quaintly short Japanese "Picture Lives!" is the brainchild of Chibi-Robo vet Hiroshi Moriyama, who designed the game to try to make something his niece would find easy and fun to play. He said as much to Nintendo Uber-President Iwata in a recent installment of Iwata Asks, during which Mr. Iwata spent time constantly interrupting Moriyama with "hai!"s. The result of their efforts is a game about building increasingly wacky characters from shapes, and then having them brought to life, complete with Chibi-Robo-esque gibberish-spewing voice boxes.

It's actually pretty amazing how much fun it is. Lots of care went into the drawing tools and the gentle progression from a few simple shapes to an astonishing variety of pieces with which you can play Deranged God by making all sorts of evolutionary rejects, even if you have as little artistic ability as I do. But as you play, you find yourself making less rejectamenta and gradually trying to see how humorous a Formee you can make and make it as adaptable as possible, in stark opposition to the depressingly mediocre Drawn to Life, which left you to just sketch things on top of a bad platformer. Here, you must consider the abilities of your creations as you allocate the pieces of your living puzzle, ensuring that it is best equipped to handle all the little quests you will have to do in order to unlock more pieces. It's actually kind of a vicious cycle. 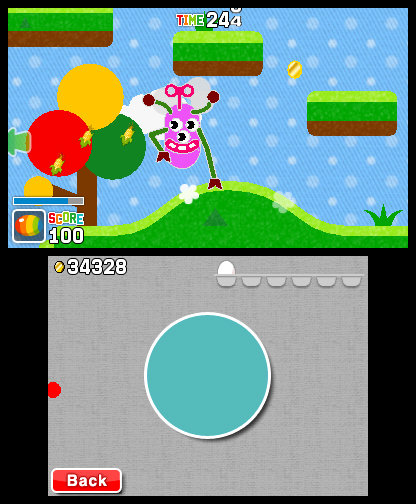 The quests themselves are amusing but ultimately rather fetchy and not terribly variety-filled. You'll wander a few distinct landscapes bringing a guy here or collecting things for a girl there. These areas sadly don't seem to randomize themselves or really throw much variety into the mix, but at least they do unlock at a steady pace in parallel with your creation efforts so that, short as they may be, you at least feel like you're progressing rather than stagnating. Ultimately, the levels are places to watch your Forms get Freaky, and at that they succeed. And, thanks to the magic of StreetPass (or so I'm told, because as I mentioned, I can't get a single hit anymore) and QR codes (which I have experienced, praise Yamauchi!), you can share these guys with other people too! Hit up the sidebar for my own dudes. Every last one so far.

So yeah, if you like creating things, and you have $7 to blow, you might just like this thing. It's got both the trademark Nintendo polish and the trademark Skip wackiness in good doses, and—up until Super Mario 3D Land finally became available for purchase—I found it rather consuming... heck, even now, it's still in the back of my mind, which is why I'm writing this. If you're into more traditional gaming experiences, you are looking in decidedly the wrong place, but if you're enamored with the concept creating crazy crap and sharing it with at least a small part of the world, Freakyforms might just be up your alley. If you do get it, please do share your creations! Lord knows I haven't scanned enough of these guys in from GAF.
Do you have Freakyforms and need more Formees to scan into your world? Or would you like to live vicariously through me by just looking and saving yourself $7?

Either way, you can follow the links below to take a peek at what I've created so far on Planet Zogg.