View in legacy (desktop) mode
I wonder how many other people will be making "sucks" jokes about Luigi's Mansion 2. Not very many, I bet, because it's stunningly original. But no, seriously, this is actually my first time playing any Luigi's Mansion. I was a latecomer to GameCube and never did pick up the original; only now, on the 3DS, have I played the series at all.

What I found in the demo playable on the show floor this E3 is a little adventure revolving around rooting through rooms of a mansion (it's a new one, they kept saying, which I'd hope was true since it's purportedly a sequel) with and wrangling ghosts into a vacuum cleaner, then getting keys from cleared to unlock more rooms, until you finally reach even more difficult ghosts at the end. 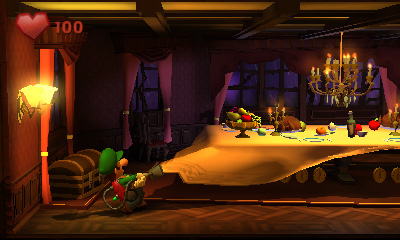 The booth attendant seemed a bit put out with the fact that the demo was very lengthy and took a while to get players through, so she was trying to steer me quickly through—but I was having none of it. The first thing I did, after the introduction by Professor E. Gadd, was start rummaging around the mansion's front yard, sucking up coins and what were presumably paper bills with the vacuum cleaner. The front door loomed in front of me, but I took a little bit of a detour and found that you could look into windows on the front of the mansion with X; after staring at the floor inside for a few moments I also figured out that you could move the 3DS around in front of you to look around inside. The booth attendant was surprised by this, and decided at that point that perhaps exploration on my part would be good.

From then on, the rest of the game was actually kind of repetitive. The first room I went into—the one I was looking in the window of, actually—required me to walk up and pull a sheet off something to get access to the key I needed. Doing this meant walking up to it, holding R to activate my vacuum cleaner and pulling back on the slide pad to walk backwards, and then pressing the A button to give it an extra tug because frankly, it just didn't suck enough. This theme would repeat itself with the ghosts who revealed themselves; I'd "scare" them with a flash of my strobe flashlight with A, then grab them with R and try to pull them back into the vacuum as numbers above their head ticked down to zero and thus capture, pressing A to give them an extra yank every so often when the icon appeared over my head. Throughout, there were various opportunities to yank more sheets off furniture and find coins and things. 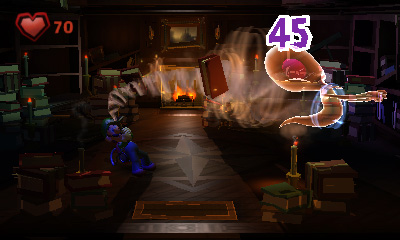 Peril in Luigi's Mansion 2 is typically (but not always—one unique room required me to dash through a gauntlet of suits of armor bringing their swords down) represented by ghosts that may or may not currently be in the process of being sucked by Luigi's massive appliance, who are then free to attack you, or apparently just plain being pulled around the room and smacked into furniture in the process of trying to capture them. The 15-minute affair culminated in a boss battle in the library upstairs, with a ghost with way too many, uh... Suck Points I guess I'll call them. He would go invisible, and you'd have to strobe him by watching the candles in the room—when one would go out, that would be where he was. While I was trying to reel him in, he'd throw books at me; these were usually pretty unavoidable and so I'd have to let him go.

And that was that. I have to confess, though, despite the fact that the core mechanics felt good, I was already rather bored with the gameplay before I even reached the final ghost. I'm not sure what Luigi's Mansion 2 is going to do to mix things up in the final game, or if I simply missed out on some of the game's appeal, but other than rummaging around the rooms for coins, I'm not really sure there's enough to hold my attention in the title, personally. But maybe, for people who liked the original, there's something there they may appreciate.
view full archive