View in legacy (desktop) mode
Mario Kart is a racing game where every racer you share the track with is an irredeemable jackhole. A game that doesn't simply reward the worst kind of behavior, but gleefully arms its players with an arsenal balanced for maximum obnoxiousness. It is a game I love, and love to hate, or maybe it just keeps me mesmerized. At its best, it comes to us as an imaginative and challenging kart racer full of whimsy. At its worst it comes to us as a blue koopa shell with the letters "FU" branded on its side. I do really enjoy the game, just not when I'm screaming obscenities at the top of my lungs.

And I really do mean screaming. No game, no matter how tough, evokes such raw rage. But has Mario Kart always been an aneurism waiting to happen? After playing enough Mario Kart 7 to thoroughly boil my blood, I figured the perfect way to start off the N64 portion of my retro replay was with a bit of Mario Kart 64.

MK64 is the second game in this venerable go-karting franchise and what a different beast it is! It's like, an actual racing game, where you race with the reasonable expectation of driving more than five seconds completely unharassed! This game harkens from primitive days in the MK universe and even though the blue shell saw its first appearance here, it behaved more like a souped-up red shell than the modern missile of imminent doom that relentlessly punishes all players who dare get good at the game. Even as I played 150cc, the computer racers barely menaced me with more than dropped banana peels and I only saw the blue shell twice, both times having been used by myself, rather than against me. MK64 is a much purer racing game, with the items adding flavor but rarely consuming the experience.

Mario Kart 64 is not as item-centric as the games that followed it, but it's not exactly driving nirvana either. The pre-rendered sprites that are used for the kart and driver do not (as one might expect) handle realistically. The karts seem to simply rotate on a central axis rather than by the wheels, which makes them turn very sharply and slide quite dramatically. One can get used to the handling, but compared to the Wii and 3DS games, it always feels like you're on the verge of losing control around corners.

Conversely, in Mario Kart Wii and MK7, the handling is quite nice, but it's hard to enjoy it for long because a strike by one item usually results in a pile up of abuse as the rest of the pack unloads everything they have on you. It's never just a hit by a red shell, it's a red shell followed by a Bob-omb, then a Starman or perhaps a Bullet Bill and a lightning bolt, with the final insult added to injury arriving in the form of Wario, swinging his fat butt across the track solely to slap you off into a lava pit. Then there's the blue shell. It's rare to finish a race without battling into first place only to have that thing arrive and destroy you mere feet from the finish line. Really, Nintendo needs to do something about that thing and I have a few suggestions. 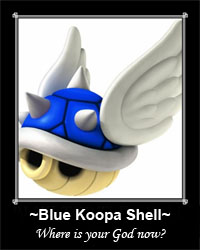 Solution 1: Get rid of it, full stop.

Solution 2: Return to the N64 days of having it act merely as a very rarely obtained multi-strike red shell.

Solution 3: Don't change it at all, but also don't have it appear in item boxes on the third lap. A randomly generated item that can cause you to lose right at the finish line is not fair by any definition.

Another suggestion I'll make is for the next series installation to add more defensive items. We have so many attack items they're becoming redundant. First place in particular should have an item that can defend against the blue shell and everything else. Maybe a Chain Chomp that temporarily drags behind the kart, attacking any item or racer that draws too near from behind. Perhaps if it attacks a blue shell, both the shell and the Chomp are destroyed. Mario Kart 7 does add the mostly defensive Tanooki Tail, but the item works by making the kart hop, which plays havoc with steering, and forget about using it on a turn. Get rid of that hop and the item would be more worthwhile. 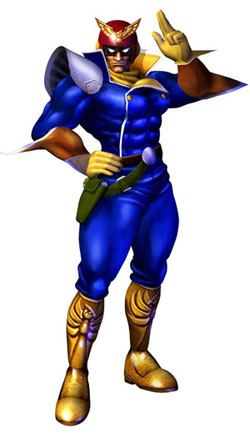 One of the most amusing video game stories I have involves the random track generator in F-Zero X. The X cup is a grand prix consisting entirely of randomly constructed tracks, which for the most part means racing around a lot of little blobs or donuts, such as it was for me one fine day in 1998. Oh goodie, another wobbly "O" to race around, or so I think.

The light turns green and the pack roars into life, we're off. Speeds quickly build in excess of a thousand kph as the sci-fi hovercraft rip around a curve. Ahead looms a steep hill, no doubt the most interesting feature offered on this drab little track, and up it I climb. Upon reaching the summit I find myself airborne, searching for somewhere to land, but only the distant surface of an alien world swings into sight and down I plunge, exploding into a pitiful fireball upon impact. Thankfully, I still have plenty of spare vehicles with which to try again.

This little donut track has a nasty surprise, a giant hill on the curve that slopes very sharply on both sides, but no matter, I have a plan for try number two. Again the light turns green and the pack of 30 cars, minus one, speeds away from the start. I don't budge, content to sit stationary on the start line and watch the counter.

Accelerating to a leisurely 300 kph, I casually drive around the course, making sure not to launch myself off that hill, and beat the race in what has to be a record-breakingly slow time. It really is too bad the game doesn't make it possible to save the randomly-generated GP races. That would have been a fun one to spring upon unsuspecting friends.

F-Zero X for the N64 was an interesting exercise in compromise. EAD had a vision for this, the first 3D entry in the F-Zero series. They wanted a rock solid 60 frames per second and a field of 30 cars on the track, a would-be first in a racing game. But to make this possible, polygon counts and texture detail took a major hit. The end result was a very fast, very fun, very ugly game. Years later, Nintendo outsourced the next console game in the series to Sega's Amusement Vision, which created a very fast, very fun, very pretty game. Considering that GX gives me the same kind of experience as X in a much nicer package, I've decided to find F-Zero X a new home. 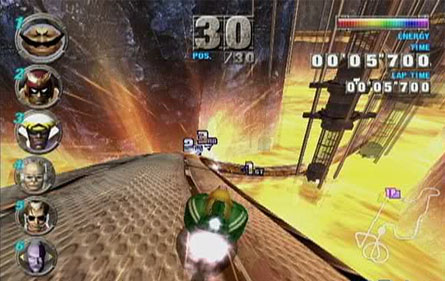 F-Zero GX remains one of the best racers ever made, but it is incredibly difficult. Have you played Dark Souls, a relatively recent game known for its difficulty? If Dark Souls were a racing game, F-Zero GX would chew it up and spit it out. To master GX, you truly need to enter racing zen mode. Beating the higher difficulty settings is worth shooting for, as placing first on a Master Cup grand prix unlocks a race from F-Zero AX, the arcade counterpart to the console game. Alas, I may never see these unlockables.

The last game in this series, F-Zero Climax, was released back in 2004 for the Japanese GBA, and didn't see a release outside of that country. The series has languished ever since. F-Zero is a game that would benefit greatly from online multiplayer, and I certainly hope Nintendo sees fit to create a new entry, either for the 3DS or Wii U. Perhaps they could take a break from Mario Kart long enough to show their other premier racing franchise some love.

Extreme-G is the odd duck out here, my only non-Nintendo published racing game for a Nintendo console. It falls into the same category of sci-fi roller coaster track racer as F-Zero, but with fewer cars, a lower frame rate, and much nicer graphics. In fact, during the N64 vs. PS1 graphic wars, XG was one of those games you'd whip out to shut your friends up when they badmouthed the N64. I still have fun with it, but it's an inferior game to F-Zero for the simple fact that the bikes often go too fast for the track to handle, especially if you're using the Neon, the game's super-bike. Check out this video of the Neon bouncing off the freaking (invisible) ceilings. At times you go so fast that the track's collision detection just shrugs its shoulders as you fly through boulders and other supposedly solid track geometry. 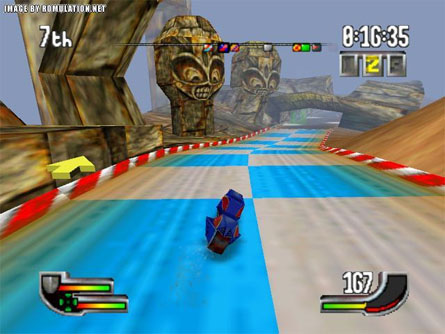 Still, I think I'll hang on to this game, even though I'm selling off the superior F-Zero X. Extreme-G has a bit of novelty going for it, as it's one of the few genuinely good games (and franchises) to come out of Acclaim, a publisher/developer that went kaput in 2004 due to questionable business practices, questionable advertising stunts, and misguided software. The XG series may not be extinct however, as Throwback Entertainment bought up a bunch of Acclaim properties. We'll see if any of them show up on the Wii U, PS4 or the next Xbox.