View in legacy (desktop) mode
Last night, we had the opportunity to sit in on the annual Nintendo Developer Roundtable, with Shigeru Miyamoto, Hideki Konno, and Eiji Aonuma talking about 3DS, Nintendogs + Cats, and The Legend of Zelda: Skyward Sword. 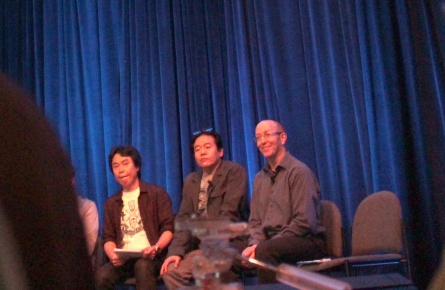 As we filed in, there were some neat videos playing on the projection screens: special video interview editions of Iwata Asks for both the 3DS and Zelda. Though regrettably, due to the crowd noise, it wasn't possible to pick up more than a few bits and pieces, I did pick up on at least a few things. Most interesting was how, in the 3DS video, Miyamoto explained how they had found some rather good success with the 3D screen solving a longstanding gameplay problem: depth perception.

The problem is this: when you render 3D objects on a 2D screen, it becomes difficult to judge the actual distance an object may be away from you. As a result, things like jumps in a 3D platformer or firing in a 3D shooter become difficult. But when the 3D information is introduced like this and becomes perceptible by the viewer's brain, it makes it possible for the player to be much more precise in his actions.

The hour with Miyamoto, Konno, and Aonuma kicked off with Konno talking about how he—a software guy, traditionally—has been in charge of the 3DS project for years now. The feature he seemed most interested in talking about was how the 3DS builds on the DS's Tag Mode functionality. For the uninitiated: Tag Mode, introduced in Nintendogs as Bark Mode, is a system where the DS, while closed and in sleep mode, will send out wireless packets to try to hook up with other physically nearby systems and exchange data for some game-specific purpose. For example, in Nintendogs, your puppy would "visit" another system, bringing a present and a voice message. Dragon Quest IX is the latest example of how popular this feature has been in Japan, where the population density enables it to really take off. But, in the DS implementation, you had to start up the game in question that you wanted to use Tag Mode with, and you couldn't play other games while it was in operation.

In the 3DS, this functionality—if it has a new name, I didn't catch it—has been folded into the system itself, and here it gains a few new features. Any game that's capable will now engage the system software for its Tag Mode functionality. Now, when the system is closed and asleep, it will exchange data for all the games you've played that support the new Tag Mode, whether you have the game card around or not. There's also a Wi-Fi component that allows the system to connect to the Internet a la WiiConnect24 when a suitable access point is nearby. This sounds like it will be more for games that get updated data from the developers directly than a person-to-person interaction, but we'll see how it all actually works when it eventually arrives in our hands.

Konno and Miyamoto also talked about Nintendogs + Cats. The game's new communication angle is via the cameras; your puppy will watch you do things like tilt your head and respond in kind as well as recognize your face and shy away from others. Miyamoto also talked about how he had almost spilled the beans when he mentioned to a reporter than he had got a cat—but at least they threw people slightly off the scent by making them think they were getting "Nintencats" instead of the whole package. The whole talk was full of amusing anecdotes, actually; Miyamoto at one point compared cats to girls—it's great when they come talk to you, but when you approach them, it doesn't work out so well—and we also heard about how, in the early development process, they swapped a cat model into the Nintendogs engine, only to see it run up and start wagging its tail.

Skyward Sword was talked about next, and from here we gleaned a few interesting details. It's long been said by Nintendo that their process is to create some sort of gameplay action and then build the game around it; in this case, though, Aonuma and company created a much more complete game before going back and building the story et al. around it. The graphical style is influenced by their love of impressionism, and Miyamoto approved it in one shot. We got a little bit about the story, too: this story's Link grew up living among the clouds; discovering later on in his life about the world below and a great evil that dwelt there that he must travel between both worlds to right. The girl in the artwork from last year is indeed the Skyward Sword—serving as Link's companion a la Navi and Midna throughout the game—and indeed eventually becomes the Master Sword.

In the Q&A session, we got a few more details about both products. Konno said that on the topic of battery life, their goal was to get the 3DS equivalent to the DSi. There are no plans with 3DS to use cellular carriers for networking—though, as mentioned, there is the Wi-Fi option.
view full archive