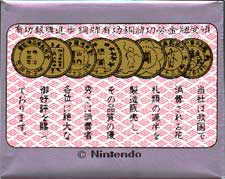 In 1889, Fusajiro Yamauchi, great grandfather of Hiroshi Yamauchi, founded Nintendo Koppai in his hometown of Kyoto, Japan. Nintendo Koppai was created with an intent to produce and sell playing cards called "Hanafuda" - "flower cards". All the cards that Fusajiro produced were tenderly hand crafted using the bark from the mulberry and mitsu-mata trees.

The hanafuda deck consisted of 48 cards divided into 12 different suits, according to each month of the year. The cards did not contain the numbers and four suits we're familiar with today. Instead they featured symbols like the wind, rain, a deer, the moon or the chrysanthemum. Different combinations of symbols and suits were worth different points. The most popular hanafuda game played was a simple matching cards game. Its veiled complexity was taken very seriously by players.

While the popularity of the cards grew in Kyoto, Fusajiro grasped the opportunity and began expanding his shops to other regions including Osaka. In these other regions, Fusajiro began adding new symbols such as swords and mountains to the decks.

Initially, the hanafuda cards were used simply for purposes of entertainment. Eventually, gamblers gained an affinity for the hanafuda cards. The Japanese Mafia, termed the Yakuza, began using the hanafuda cards in their high stake games. Professional players would begin each new game with a fresh deck of the handmade cards. Fusajiro suddenly had problems keeping up with the demands and had to start training apprentices to mass-produce the cards.

The kanji characters Yamauchi chose for the name Nintendo roughly translates to "in the end, it is in heaven's hands".

In 1907, Fusajiro expanded the business to make Nintendo the first company to succeed in manufacturing western style playing cards and successfully selling them in Japan. With his growing success, Fusajiro needed a better distribution system for his cards. In a landmark deal, Fusajiro partnered with Japan Tobacco & Salt Public Corporation to sell the cards in their cigarette shops. 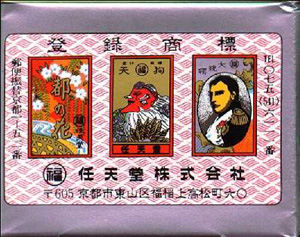 A hard-working young man named Sekiryo Kaneda was arranged a marriage with Fusajiro's daughter Tei Yamauchi. Sekiryo gained the Yamauchi surname, and in the process sealed a destiny of one day leading Nintendo. Shortly after their marriage, Sekiryo and Tei conceived a daughter named Kimi.

In 1927, Shikanojo and Kimi had their first child, Hiroshi Yamauchi (pictured right). Five years after Hiroshi's birth, Shikanojo abandoned his wife and child. Kimi moved in with her sister, and sent Hiroshi to live with his grandparents Sekiryo and Tei. [READ MORE].

By 1929, Nintendo Koppai had easily become the largest playing card company in Japan. Sekiryo gained the Yamauchi surname and was given the responsibities of becoming the second Nintendo president. Fusajiro comfortably retired in 1929 - content with the company's direction and pleased by his personal success. 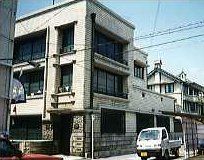 In 1933, Sekiryo Yamauchi established a joint-venture partnership named Yamauchi Nintendo & Co. and moved the company's head-quarters to a new building constructed next door. Sekiryo purchased paper from outside suppliers, and further streamlined his business with an assembly line of workers.

Sekiryo suffers a stroke and calls on Hiroshi to his bedside. Sekiryo asks Hiroshi to leave school and immediately come to work at Nintendo as president. Hiroshi knew that he could never gain the same respect the employees had for Sekiryo. As a result, he requested that he be able to use his authority to fire all those who were not welcoming to change. Sekiryo reluctantly said yes. Hiroshi became the third president of Nintendo and with that, he began systematically firing all the old managers and many of the old workers to guarantee that there was no one to question his authority and his plans for the future Nintendo.

Hiroshi set into motion plans to modernize Nintendo by moving its head-quarters to a newer building on the Takamatsu-cho street. Hiroshi also consolidated the production plants in Kyoto to make the card production process more efficient.

Nintendo was the first in Japan to begin manufacturing plastic-coated cards. Cards in the west were already being made in this fashion.

Hiroshi strikes a deal with Disney to let Nintendo produce playing cards featuring Disney's characters. With the aid of successful TV ads and a good distribution system through many large toy and department stores around Japan these cards sold over 600,000 packs that same year.

Hiroshi began putting his plans in motion to transform Nintendo to more than a card company. To inaugurate this new direction, Hiroshi changed the name of Nintendo Playing Cards Co. to what it is known as today - Nintendo Co. Ltd. Yamauchi had a storm of ideas in his head. The first product out of Yamauchi's mind and Nintendo was in the form of individually portioned instant rice. Rice is a staple of the Japanese diet; Hiroshi figured that instant rice - rice made by simply adding water - would become a hit. Unfortunately, it was not the case. Yamauchi learned a lesson; instant rice was not the future of Nintendo.

Hiroshi got a little more serious with his next venture. He decided to open a "love hotel" with rooms rented by the hour. Hiroshi was a frequent costumer at this love hotel despite him being a married man. Apparently his wife knew about his visits but chose to ignore it.

Another of Hiroshi's projects was "Daiya" - a taxi company. The business was going well, however after having to constantly negotiate with the all-powerful taxi driver unions (who demanded higher salaries and benefits) he closed the business without looking back. The seedy love hotels eventually met their demise as well.

Yamauchi realized the company's biggest asset was its far-reaching card distribution system into department and toy stores throughout Japan. Yamauchi's next idea would take advantage of this and cement the company on its path into video games and entertainment.