View in legacy (desktop) mode
I'm not going to try and tell you what Super Mario Galaxy is all about; you've played it already. Suffice it to say Super Mario Galaxy 2 is as if you tacked another whole mess of levels right on its tail end. Mario controls identically, the level goals are identical, the graphics are (largely) identical... it's the same game. Luckily for us, never before has a platformer oozed such quality as to demand that its unused ideas be coalesced and packaged so we could spend even one precious second more enjoying it.

Since you already know all about Galaxy (I refuse to accept any other scenario), I'll cut to the chase and focus only on what's new. If the assortment of levels in the demo build at the Nintendo Q1 Media Summit is any indication of the final game's overall feel, the original Galaxy's trickiest elements are rote in Galaxy 2. Bullet Bills fly in swarms, gravity upends with every step, and obstacle courses demand the finesse only a domesticated dinosaur can supply. 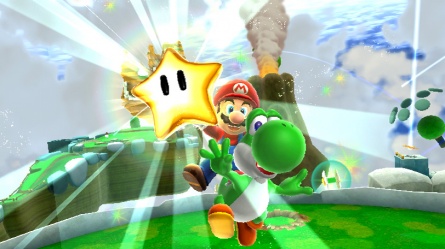 Yoshi, of course, is the most immediately obvious addition. His implementation in Galaxy 2 makes me wonder why anyone even tried to make him work in 3D before the advent of the Wii Remote's pointer. Targets that can be tongued will be circled in red when you point at them, and pressing B will Do the Deed. There's a Yoshi-version of Galaxy's pull-stars here, where pointing at a series of flowers floating in mid-air will swing Yoshi from point to point by that most versatile and curious of appendages. Most enemies will be eaten outright and expunged as star bits or coins. It should probably give us pause that we are expected to consume, defecate, and consume again in such short order our own waste, but such is the way of this baffling universe in which we quest.

Consume a Bullet Bill, and Yoshi's options increase. Moving the pointer around will aim a red arrow that extends from his stuffed mouth, indicating the direction that the bullet can be spat in. You can launch a Bullet Bill only in a straight line parallel to the ground, so jumping in the air is necessary if you have your sights set on higher targets. Hold your tongue for too long and poor William will explode in Yoshi's mouth, and that's not good for anybody. A boss fight featured in the demo used this bullet consumption as its primary mechanic, with targets on its chest and back aching for some precision shots. 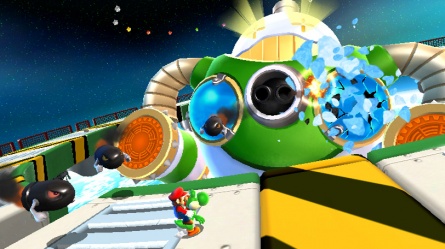 Not content only to eat his enemies, Yoshi also has a series of abilities that are based upon the eating of various fruits. The demo featured two such examples—the red pepper and the "blue fruit thing." The former serves to rocket Yoshi forwards at incredible speeds, during which he is able to defy gravity and stick to walls that are accessible via ramp. The latter fills Yoshi with air that is utilized as a jet of sorts, blown out of the mouth to push him slowly into the sky. Holding the A button will shut his mouth, allowing him to float in a more horizontal fashion when needed. Both fruits' effects are fleeting, but you can consume or merely make contact with a second fruit before the effect of the first wears off to prolong the ability. And don't forget, you can always jump off Yoshi's back by hitting A while holding Z, abandoning him to that pit in a last-ditch effort to save yourself, and only yourself, if your fruit ability runs out.

If we classify Yoshi as a new kind of powerup, we could say he was joined in the Galaxy 2 demo by the drill. There's really not much to it, you perform a spin move (shake the Wii Remote) while holding the item in question to drill down into any soft ground and pop out on the other end. Sometimes this means the other side of a planetoid, sometimes this means the inside of a planetoid. There were some clever environmental puzzles built around this mechanic where tall structures on one side of a planet could only be traversed by drilling into an accessible spot on the opposite side. The drill can also be used as a weapon, as one boss fight illustrates by placing a captive star in the belly of a robot that can only be pierced when you drill through the other side of the planet it circles. As Nintendo's very own Nate Bihldorff remarked during a demonstration of this fight, it's somewhat reminiscent of the Raphael Raven boss battle in the beloved Yoshi's Island. 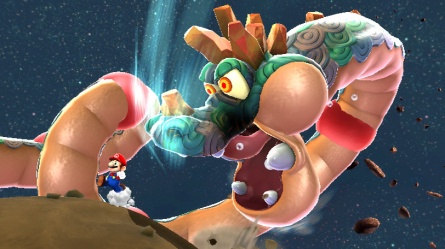 Nintendo must be assuming some degree of Galaxy familiarity from the showgoers here, as virtually all of the demo levels throw you right into the mix with some very advanced and tricky level designs. One level features the 2D gravity backdrops that cause you to fall either up or down depending upon what you're in front of, and it becomes particularly merciless when up and down switch places on a set rhythm. Another level is a horizontal cylinder that you two-dimensionally traverse along the sides of in such a fashion that falling means only that you will spin around the outside of the cylinder endlessly until you find a new foothold. Perhaps the most nerve-wracking level was a purple-coin challenge that gave you four minutes to collect 100 coins across a series of platforms that appeared or disappeared when you performed a spin attack. Since I've become accustomed to spinning at the end of jumps to give myself extra distance, I had to relearn traversal without that luxury, lest I spin my landing spot away inadvertently.

These levels also feature some recurring elements that were nowhere to be found in the original Galaxy. The first is midpoint flags, styled identically to those found in New Super Mario Bros. Wii. Most levels had at least a couple of these, which set your starting point if you lose a life later in the level. The second is what I've been calling "challenge pads," which are little pads that will warp you to an isolated arena where you're tasked with besting a certain number of enemies quickly to earn a 1up. Finally there are comet coins, which are placed once in each level, and even take up a spot in the HUD as a dotted white circle before they're acquired. I was assured by a Nintendo rep that collecting these would be necessary to unlock additional levels, perhaps similar to the comet challenges in the original Galaxy.

Galaxy 2's driving philosophy seems to be "denseness." Levels have a lot more going on in them, be they actual enemies, environmental elements with extra details, or challenges to overcome. Nintendo hasn't just opted to make more Mario Galaxy levels, they've one-upped the un-one-uppable and crammed more excellence into an already suffused template. With a release date that is so tantalizingly close and yet so agonizingly far, I'll be biting at my nails in anticipation until I'm left with naught but useless stumps. And let me tell you, this is not conducive to the playing of this game by any stretch of the imagination.
view full archive