Nintendo's E3 preshow event has come and gone, and boy was it a doozy. A full orchestra was in attendance to regale the audience with Zelda tunes, in commemoration of the series' 25th anniversary (and presumably also Skyward Sword's orchestrated soundtrack). While Shigeru Miyamoto and Bill Trinen talked over one another in such a manner as to make them both nearly incomprehensible, Nintendo's plans for this anniversary were made clear.

We already know that The Legend of Zelda: Ocarina of Time 3D is coming out on the 19th, but we've got Skyward Sword confirmed for a holiday release (along with a golden Zelda-themed Wii Remote), Link's Awakening on the 3DS Virtual Console today, and a surprise announcement of Four Swords coming in September to DSiWare for free. It's anyone's guess if it's a port of the version included in the GBA release of A Link to the Past or a newly enhanced edition, but presumably we'll find out more about that closer to release.

That orchestra was also a good segue into the soundtracks they plan to put out throughout the year. If you register Ocarina of Time 3d on Club Nintendo right away, you'll get a complimentary OOT soundtrack (presumably supplies are limited there, run home and register it quick). There will also be an orchestrated album releasing later in the year to coincide with a Zelda orchestra tour they're planning across various territories.

Then Iwata came out and teased the audience mercilessly. Hey we've got a new console eh. We say it's for everyone, Wii was kinda casual but we're gonna make this one even and for everybody. But oooooops we'll talk more about it later how about the 3DS now instead (laughs).

They showed off five 3DS games, one of which was a surprise: Luigi's Mansion 3D. Luigi's Mansion was mentioned in the past as a game Nintendo had running on the GameCube's attachable 3D screen that never saw the light of day, which may have inspired the sequel into development.

New trailers and features were shown off for Mario Kart (hang-gliding, underwater racing, and kart-building), Kid Icarus (much-improved lighting and a neat-looking multiplayer mode I'm worried won't be online), Star Fox 64 (really looked stunning but multiplayer improvements make me even more annoyed that we know this one's not online), and Super Mario (looks more like a mix between 2D and 3D Mario than the promised mix between Mario Galaxy and Mario 64). These four were all promised to release before the year is out. 3D trailers for the whole bunch (along with others for the likes of Ocarina of Time, Animal Crossing, and Paper Mario) just showed up on the 3DS eShop, and man-oh-man do they look fabulous on that screen.

But that's enough preamble, everyone had their eyes glued to this show for one thing and one thing only: the reveal of Nintendo's next home console. Soundly squashing the ridiculous parade of names the Internet has been bandying about over the last few months, the moniker was finally nailed down: Wii U. Clearly there's interest in furthering the Wii brand here rather than cutting it off entirely, and many of the new system's philosophies seem to support that notion. 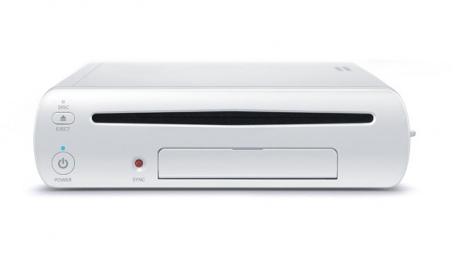 Everything about the Wii is compatible with the Wii U. The Remotes, the Balance board, and all the games. Many of the examples of how the new system could be used leveraged those very controllers, in fact. Even the system itself is extremely similar to the Wii visually—a compact white box that's more similar to a Zip Drive than anything else. The new controller, though, is where everyone's attention is placed.

Confirming Internet rumor-mongering, the Wii U's controller sports a huge 6-inchish touch screen smack dab in the middle. It's bordered by traditional gaming staples: two analog sticks (though they look more like slide pads), a dpad, four primary face buttons, two shoulder buttons, and two triggers. In addition to a 3DS-like home-row of buttons, there are myriad environmental sensors crammed in there: an accelerometer, a gyroscope, a microphone, and a front-facing camera. It's actually very similar to the 3DS in terms of its raw featureset. 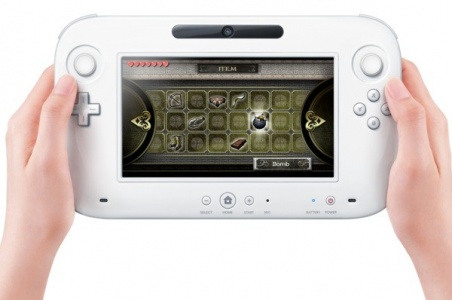 I won't dwell much on the demonstrations since we'll have better first-hand accounts as the show goes on, but suffice to say the screen can be used in many different ways. Game can be played on it exclusively with the TV off on on another channel, it can be used in conjunction with other controllers for multiplayer gaming, or you can even look "through" the controller while holding it in front of the TV to create some pseudo-augmented-reality type situations.

Particularly surprising was the list of 3rd party games confirmed to be releasing on the system, including Darksiders 2, Batman: Arkham City, and Ninja Gaiden 3. The reel certainly contained video from already-released trailers for other platforms, but at least one was running on the Wii U hardware: Tekken. It showed off some examples where you could draw on the fighters' faces or illustrate outfits, but it looked noticeably less refined than the other trailers. 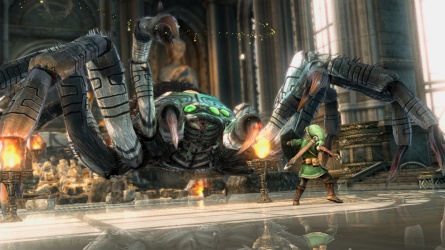 Whether this is due to the earliness of the game's development or the system's hardware ability is really up in the air at the moment. A tech demo was showcased that looked pretty impressive, and I hear an even more impressive one is being demoed to press, but it's questionable how that much power is fitting in a box even smaller than the current Wii. All we've really got to go on are tech demos right now, but all indications place the system's raw output at PS3/360 levels, if not slightly higher.

There are still a lot of questions that need answers. Better online functionality was promised, but not elaborated on in the least. All controller applications only had a single Wii U controller being paired with Wii Remotes, so it's questionable whether or not you can even USE two Wii U controllers at the same time. Surely much of this could be cleared up over the coming days, but there are many things that will remain mysterious for the time being. The Wii U is scheduled to release between April and December of 2012, so there's plenty of time for Nintendo to draw it out agonizingly until we aspirate completely.