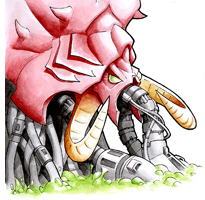 By now you've heard the news and have registered it in your own way. I'll even admit that I'm not quite as fanatical about the Metroid franchise as several other Nintendo fans I know. For me it was always Mario, Zelda, and then Metroid...in that exact order. But that doesn't mean the news of Metroid being a first-person-shooter passed me by without so much as a raise of the eyebrows. Undeniably, the first-person-shooter genre and the traditional 2D vertical scrolling game play of the Metroid games are almost worlds apart at first glance. Within minutes of the news breaking on the internet, the backlash to the news spread across message boards and chat rooms.

If you thought the response to Jar-Jar Binks from the Star Wars faithful was bad...well, lets just say that overall reaction was quite mixed from the Nintendo fan community in this instance. Those who haven't lost themselves in the rich gameplay of the Metroid games for hours on end might say, "what's big deal?". Well on one hand the expectations on this game are probably beyond Nintendo's control. It's hard to deliver a product that carries seven years of expectations with it and a fiercely loyal cult following. Who knows, perhaps a Metroid first-person-shooter might just (gasp!) be a good game. Hell, it could even be a great game. We all saw what happened with Paper Mario, didn't we?

Apparently, however, there are some lines that even the most die-hard Nintendo gamer won't cross. Seeing the holy Metroid franchise translated to a first-person-shooter (insert paranoid thoughts of Half-Life here) was perhaps too big of a leap of faith for many. Not to rattle on Retro Studios, but they really are placed into an impossible situation here by having to satisfy all the demands for a Metroid sequel. The game has already been placed in a negative light and if it can't deliver to the more hardcore Metroid audience it might not be the starting point which Retro hoped for.

What's my take on it? Personally I think the first-person Metroid title that Retro has in development probably is coming along quite well and will undoubtedly be a good game by the time it's finished. Whether it'll be a Metroid game that pleases the masses is up for debate. All things considered, this is route I wish the game would take (and note this is just my two cents, in case you have to be reminded):

1.) Cut Retro loose of this project. The expectations are almost impossible, and chances are
the company would be better suited at making their own FPS from the ground up. Lets face it, if this game isn't up to snuff of what Metroid die-hards want, Retro will be vilified. Not only that, but Retro would likely have a hell of a lot more creative freedom with their own FPS.

2.) Hand the project over to Japanese programmers and artists, perhaps even the team who did Sin & Punishment for Nintendo. Get some of the Super Metroid people such as Metroid designer Makoto Kanoh and Super Metroid director, Yoshio Sakamoto to oversee development if possible. This would allow the game to retain the anime character designs that in my opinion are really integral to the Metroid franchise. I love the more gritty American style as much as anyone, but Samus and company are definitely a Japanese design by origin. If it isn't broke, why fix it?

3.) Set the game in a more 2.5D world. This would by default almost keep the feel of the previous titles and retain Samus' very cool jumping and other special attacks while also opening things up for more depth that a standard 2D perspective. The camera could toggle between a more side-scrolling 2.5D and a more isometric overhead view ala Sin & Punishment. These would be set, pre-defined camera angles.

Take a look at this video of the N64 shooter Sin & Punishment. Seems like shooting and jumping could work pretty well from that angle, and the camera could then switch to a side view for more vertical jumping areas. Free-roaming 3D boss battles could be interesting. Still not buying it? Take a look at Namco's Klona 2 for the Playstation 2. Of course such an approach would have to be tweaked for the claustrophobic Metroid levels, but it seems plausible.

4.) Contrary to what some might say, I don't think the first-person-perspective is entirely a bad idea. Samus' body suit would make Boba Fett and Batman quite jealous, don't you think? I'm all for a "inside the armor" view as you'd be able to perhaps access functions such as night vision, Robocop-like targeting, T2-style enemey identification, and zoom vision. Perhaps Samus could even receive audio/visual transmissions and mission briefings in this mode, similar to how Solid Snake receives Codec messages in the Metal Gear Solid games. In Nintendo fashion, you'd be able to pick out secret passages and clues to where to go next by using this viewpoint as well, instead of always using the standard "action" viewpoints listed above.

As I mentioned above that's just my take on the situation. I definitely expect whatever Metroid title that comes out of Nintendo to be a good product at the end of the day. We don't know the exact reasons behind the switch other than the fact that Retro's third-person version was apparently having some pretty bad camera problems. I hope Nintendo does at least consider fan reaction to the news. I'm sure it wouldn't be the worst idea in the world to let Retro run wild with their own FPS title and rethink this project. In the end, I will wait until E3, where the game will hopefully be displayed to make any kind of concrete judgment. I'm really hoping Nintendo will prove the critics wrong with whatever route they end up taking.