View in legacy (desktop) mode
For me, this is the moment: a full orchestra playing the first level of the Super Mario Bros. theme while an entire theatre filled with every different kind of person, male, female, of all ages and races, cheers and smiles. Each transition from the orchestra draws excitement. To the underground theme, the water level. "Here's some music from a game you all know," conductor Arnie Roth said before they begin the medley. A game we all know, a game we've all played, and music we can all enjoy.

I received the program for Play! the morning of the concert, well before everyone's excitement had been boiled to fever pitch. I had just finished interviewing Nobuo Uematsu and Yasunori Mitsuda, a crazy, crazy experience to be sure. From my point of view, learning I was to interview these two men was like the Pope learning he would get to interview God: it is something you can understand, sort of, pay lip-service to the idea, but it is almost frighteningly hard to comprehend. Imagine how peculiar it was then, as I sat across from Uematsu while he gestured to his translator, speaking words in response to my questions. I suppose God might speak Japanese? One of the questions I had asked him was in regards to whether or not we would hear One Winged Angel at the concert later in the evening. He told me it was a secret, but there it was, the last track on the list in the printed program.

And oh, the program. Such marvelous bounties of song awaited me: 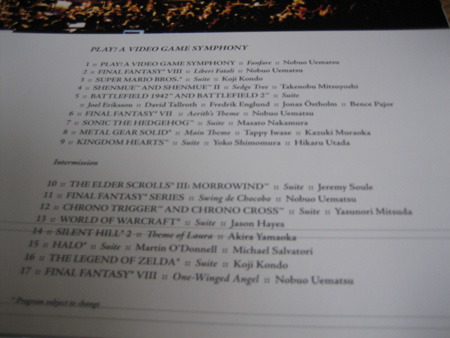 One thing caught me, from the sidebar. It was a short introduction from Uematsu, who had this to say:


When I first started working in the gaming industry over 20 years ago, video game music was not considered "real" music. Now mainstream in the entertainment business, video games and video game music alike continue to evolve and gain prominence among the masses.

No borders separate this music, the audience, or the performers at this concert; every part contributes equally to the joy of the evening. Music compositions are seeds, video games are soil, and your encouragement becomes the water and sunshine. With you, this project will flourish.
It seemed a particularly accurate statement as I sat there watching everyone react to Super Mario Bros. with glee.

The concert started late, around 8:15 or so, with a brief introduction by Arnie Roth, the chief conductor for this show, as well as the previous Dear Friends and More Friends concerts, and the Japan-only Voices concert.

The opening song of the evening was a fanfare that Uematsu wrote specifically for the Play! concert series. It was, as promised, a fanfare. You can hear a MIDI rendition of it play embedded at the official website, www.play-symphony.com. The show moved onto "Liberi Fatali," which was a very faithful replication of the original orchestral opening track from Final Fantasy VIII. Nothing new if you're any fan of video game music soundtracks: the song's been available both on the OST and the arrange album, as well as on both the 20.02.2002 and the More Friends album for a while now. Still, however, it was just as exciting to see it with a live band and choir again.

The third track was a Super Mario Bros. medley, as I mentioned, but before it started, Arnie Roth took the opportunity to point out that Kondo, like many of the other composers, was here tonight. Not only was he here to watch though: Kondo then took the stage and played an entirely piano rendition of the theme from New Super Mario Bros. He was really getting into it, too, bopping his head back and forth like a Koopa Troopa while playing. The Mario theme rendition was a combination of tunes from the first game and Super Mario World. There was also one section which was the Bob-omb Battlefield song from Super Mario 64. It was sweet!

Next up was "Sedge Tree," the main theme from Yu Suzuki's Shenmue, composed by Takenobu Mitsuyoshi. It sounded very similar to the version that was released on the 1999 Shenmue Orchestral Version CD. This is a good thing, as the song was absolutely epic, filling the Rosemont with rich cello.

For the fifth song, a suite from Battlefield 1942 and Battlefield 2, Roth introduced an astounding guest percussionist, Rony Barrak, who soloed on a small, hand-played drum called a darbouka. Evidently, he is one of the most renowned players of darbouka in the world, and his performance certainly reflected that. Each small tap of a finger was able to produce a sound, and he played so quickly that there could literally be ten or fifteen notes a second. It was remarkable! The rest of the song was okay too, though I have never played either of the Battlefield games and so I don't know how faithful they were. 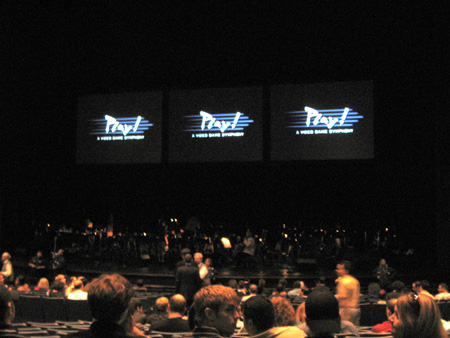 After that we had Aerith's Theme from Final Fantasy VII, another song that is widely available performed in symphonic style on an assortment of released albums, like "Liberi Fatali." The song received warm applause, and then Roth moved us on to the surprise hit of the night:

Sonic the Hedgehog. This was a very interesting orchestrated arrangement of the Green Hill Zone, Marble Zone, and Star Light Zone themes from the first Sonic game. I often associate Yuzo Koshiro (who was also in attendance at the concert) with upbeat music on his Sonic compositions, and so it was interesting to hear these three songs done in a very slow and elegant fashion. Star Light Zone in particular was excellent. To my knowledge, no music from the Sonic games has ever been recorded with an orchestra. Let's hope they release a Play! album for this one...

Next up was the inimitable main theme from Metal Gear Solid. It seemed to be based off of the longer Beatmania version remix. It combined the classic overture at a couple of different speeds. The only complaint I'd have with it is that it was a little repetitive, but at least they incorporated all the flourishes. The song was accompanied by footage from the new MGS4 trailer up on the main screens. It was actually pretty exciting to see the footage with orchestrated music. I think the series would benefit from a more orchestral live sound.

The first half of the concert closed with a suite of music from Kingdom Hearts and Kingdom Hearts 2, introduced by Roth as a game that comes from two powerhouses of their industries, Disney and Square. It still seems strange to hear the two companies in the same sentence. The song was an orchestral mix of the main "Simple and Clean" styled overture from the first game, and the new song from the second game, "Passion." The suite started off light, but became quite brooding and dramatic toward the end. It fit very well, and really made me want to check out the second game. I'm not sure if any orchestral versions of the Kingdom Hearts music is available. It might just be part of the OST. This arrangement is new though, I am sure. Sadly, Yoko Shimomura wasn't present for this show, so I could not express my undying admiration for her work.

So, this was the first half of the show. Since I was there as press, I got to attend the special "backstage gathering" during the intermission, where they had cheese, water, and wine. I met up with a couple people who were there doing things for Gamespot, and talked to our PR representative for a while, too. The highlight, however, had to have been Mitsuda and Uematsu-san drinking lots of wine and getting rowdy on the couch. I must mention here, that during this whole thing, all of the composers were just meandering about. It was a sublime experience to be standing near Mitsuda, just eating some cheese. Kondo was walking around, spoke to Uematsu for a while. The conductor, Arnie Roth, also came down to talk to people. Angela Aki showed up to mingle. Before everyone took off to get back to the theatre, I snapped a few pictures alongside our PR rep. Everyone was relaxingly animated and seemed to be enjoying the company. 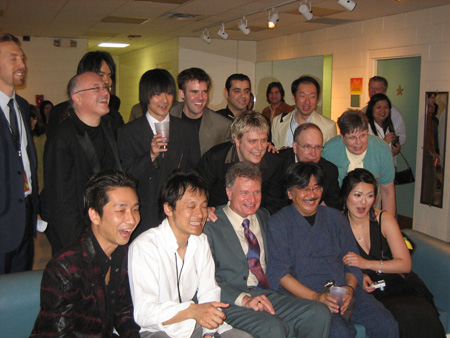