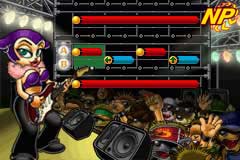 While Nintendo didn't have a large presence at this year's spring TGS show, they did manage to pull off one major surprise -- Game Boy Music. The game is Nintendo's first entry into the music game genre. Touted by Nintendo as a game pak that transforms the GBA into a "musical instrument", Game Boy Music allows the player to create their own music tracks from a selection of 50 different musical instruments. The A and B buttons along with the d-pad can be manipulated to take the basic instruments and create a real music track.

The game will ship with a Pocket Speaker accessory. The accessory allows the GBA to pump out music with more bass and volume than the regular Game Boy Advance speakers. We're guessing it also gives the GBA full blown stereo speaker capability without the need for ear phones. The game also allows players to "sample" snippets of pre-recorded music tracks into their own music track. Game Boy Music also features 50 music scores, including some familiar Nintendo favorites and other Japanese pop songs. 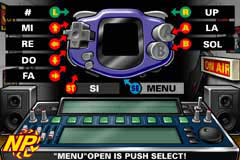 Beyond that, you can hook up your GBA with your friends and "jam" with your friends in the band mode. Since Hiroshi Yamauchi mentioned earlier that the GBA would be able to download mp3s, we're wondering whether or not you'll also be able to sample beats from mp3 tracks via the Mobile GB adaptor. Currently this title is slated for Japan only. Although we really have only one in-game screenshot to go by, the game's art style seems to be quite different and new. Although it's still a cartoon style, this is definitely not Pokemon, but more akin to PaRappa The Rapper.