View in legacy (desktop) mode
My copy of Rune Factory 2 arrived last week, on the day I was preparing to leave for Thanksgiving with family. I was excited—and maybe a bit impatient—to have the chance to return to the world of Rune Factory, but as it turns out, I was in for a bit of a surprise. 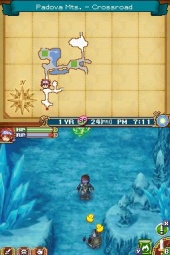 You see, I'm still in the game's first generation. If you've read the summaries you'll know that Rune Factory 2 is a multigenerational game; you start out playing amnesiac hero Kyle and complete the game as his child. In that first generation, you immediately have access to the town and four dungeons, but the dungeons are mostly blocked off by strange structures that Kyle doesn't know what to do with. This setup gets you access to all four seasons of crops and lets you learn the ropes of combat (and, yes, it is much improved), but definitely limits what you can do. It's looking like I won't be able to do many of the neat things I loved from the original Rune Factory—like forging and crafting—until after Kyle, well, settles down.

But I'm not really missing that stuff so much, and the reason is the job board. When I heard about this feature, I figured it was one of the sidequest vending machines that seem to be becoming a modern RPG staple, but it's so much more. Though the quests you receive do sometimes take the fetch form, every one is fully scripted; put together, they immerse you into the lives of each one of the characters in town in a dramatic way.

Many hours later, Kyle is getting ready to marry—probably starting the wheels in motion for all the cool activities that bachelor Raguna from the first game enjoyed—but I'm debating whether I should, because I feel like I haven't gotten to know everyone as well as I could have. Long story short, Rune Factory 2 is shaping up to be quite a different beast from its predecessor, and it thus far seems to be a good thing.
view full archive