Is there really anything left to say, after all this time? I mean we know how it is, this series hasn't changed in any real appreciable way since 1996. Obviously this and that has been tweaked and streamlined, but for the unwashed masses among whom I hold residence, it's all pretty superficial. Catch 'em! CATCH 'EM!!!

The idea of a world suffused with these monsters of varying rarities, derping around in their own environments, has always been really cool to me. Trying to catalog it sounds great. The problem is that it's a video game. More specifically, the problem is that it's a JRPG. "Rare" means "grind until it appears." Run in circles until random battles spew out what you want. "Catalog" means "very carefully knock HP down to red, give it a status effect, then grind Pokéballs until one shuts." Grind and number-crunch, grind and number-crunch.

Do you know what would be a super-fun way to catalog Pokémon via a Pokédex? Pokémon Goddamned Snap (official title). Find a Pokémon on the field, not via a random battle, and catalog it by taking pictures. Or if you just have to catch it, do something logical for whatever type of Pokémon it is, as opposed to just hoping luck favors your catch-rate math. Knock Charmeleon into lava to evolve it into Charizard? YES. Figure out logical environmental puzzles to make certain Pokémon appear, evolve, or get captured/photographed. 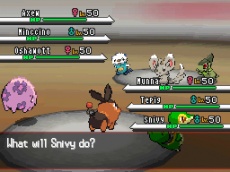 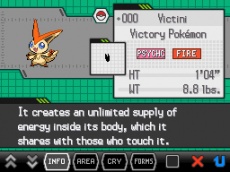 But you know what, wishing a Pokémon game was something it isn't has never really been healthy; the creators clearly have no interest in changing the formula beyond the superficial elements, and the actual series fanbase loves it just the way it is. I always get The Itch when a new one of these games is announced but I had finally said okay, I won't get Pokémon White, I know what will happen. But maybe if Nintendo wants to give me it to review, maybe then I'll take it. So I took it. Now the question is, can the game be played by someone who doesn't buy into all this nonsense in a fashion that's still enjoyable?

As it turns out, it can! The thing is that Pokémon is a game, a series even, that is stupefyingly dense with content and ways to play. There's the whole multiplayer metagame that requires intense attention to training and grinding, there's the ol "catch 'em all" that requires nearly the same level of wild dedication, but there's also just the "build and maintain a party so you can beat the encounters in the game" way of playing, which is perfectly achievable by any old shmuck.

Say a new Pokémon pops up in the field. Rather than think "oh shit I have to stop killing and figure out how to reign back these moves I've been powering up and delicately capture this asshole," I just kill it. If I see something I really want, maybe I'll try to catch it the next time it comes around. But you don't really have to catch 'em all, you know! That stupid trash bag Pokémon can just get stomped on every time you see it, placing it in your PC to "never be touched ever" really doesn't accomplish anything, now does it. 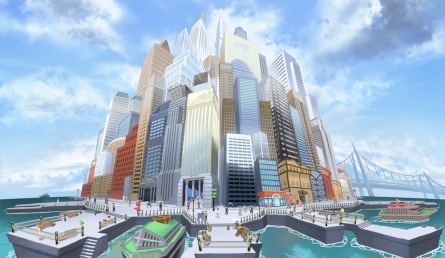 So now I try to enjoy the bestiary just like any other RPG—it's just a new thing to kill. It's entirely possible that I'm espousing a philosophy long-held by plenty of Pokémon-ers, but it was difficult for me to overcome my hedonistic leanings that just really drive me to catch 'em all. For me, however much that phrase sounds appealing, the design of these games just does not encourage it in an actually entertaining fashion. Thanks to Pokémon's huge-bigness though, there's plenty else to do that's more than enjoyable enough. If I can't catch 'em all, I can at least try to "see 'em some." And beat them to death.

And I do love the breadth of that bestiary. Since the game is exclusively populated by 156 brand-new critters, I can't really rely on what I had learned from a childhood full of Pokémon cartoons to tell me what I'm about to fight. That freshness is fun though, trying to figure out how to attack a guy. "I wonder what type he is," before he comes out. What does that name imply. Is there a pun in there, can I divine a type from that? Oh he came out, does that guy look like he'd have a high defense? I should hit him with a special attack then yeah? IS HE FAST? It's sort of fun to try and divine all the things you should do from how a guy looks and what his name is.

So if I segment the experience into just the parts I want to play, it's alright for sure. At least, that's where my mind was around halfway through the game. Now here I am in the post game going around the map all over again and catching everything I can get my hands on. You know what sorta changed my mind here: repels and false swipe. I don't hate random battles as much when I can just "turn them off" whenever I want. And I don't mind knocking down health so much when I have a move that absolutely can not kill them no matter what I do with it, and a bag just Fat with Ultra Balls. With the typical annoyances mitigated my carnal desires return a little bit and I'm like "Cory do it catch them all Cory what else are you going to do write this review or something I don't think so CATCH THOSE GOD DAMNED POKÉMON." 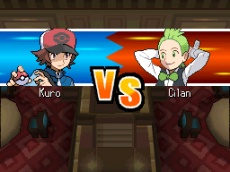 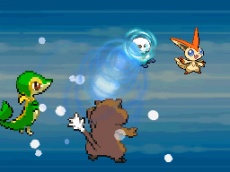 So I caught a lot of Pokémon. It's neat really cause when you beat the game suddenly the world is full of the Pokémon from the previous four generations, which had been banned utterly from the region until that point. Just when I had really fattened up that Pokédex I'm shown the terrible shame of 493 empty slots. Now I'm not going too crazy here, I'm quite aware that actually FILLING those 493 slots will be effectively impossible without trading with a billion people because most of them are unobtainable through the single player, but a peppering of entries I think will be satisfying enough.

It sure would've been nice if they hadn't cut out the ability to move your Pokémon from the GBA games, though, which was fully functional as recently as HeartGold and SoulSilver, also on the DS. With Black and White billed as "sort of a new start I guess," I'd think they might expect to attract people like me who haven't touched the series in a while, and who maybe have old games they want to hook up on in there.

To be fair though, while yes on a fundamental level this game is as unchanged as ever, there's been a fair amount of high-level tweakin' since I played through Sapphire. TMs (used to teach specific moves to your Pokémon), have gone from one-use to unlimited use, which yeah that's great actually. And hey this game is nice looking huh, look at all those polygons, and those sprites with their animations, who knew. There's also a whole lot of wireless and internet connectivity that is frankly just way beyond me but if you know a lot of people with the game you might have a pretty okay time with all that.

Is Pokémon White (and Black by association) the best Pokémon yet? I think that's fair, absolutely. There are some great tweaks, the brand-new set of Pokémon is diverse and creative, the plot while spartan has some interesting moments, and it's an immaculately constructed production for what it is. That's the clincher right there though, are you okay with what Pokémon is? Are you susceptible to its unchanging charms? Can you segment your attentions to just the parts you care about, and discard the rest? I think I managed to, and the rest slowly grew on me.