Nintendo landed on a goldmine when it combined the parody all-star formula with the fighting genre. Pitting Mario, Luigi, Samus, Donkey Kong, Pikachu, Fox McCloud, Captain Falcon, and other famous Nintendo characters in a ring, and letting them duke it out; created a very fresh and innovative game experience. Super Smash Bros. Melee doesn't stray too far away from the original, but it heavily builds upon it by increasing and improving upon every single aspect of the original. 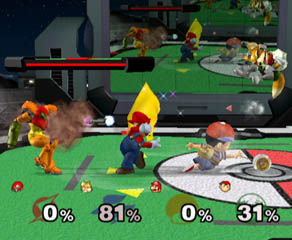 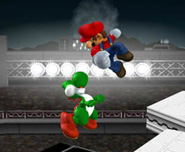 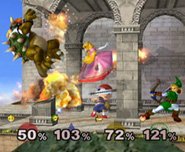 Anthony: The GameCube's first true commercial killer app is none other than the sequel to the once considered niche N64 brawler. Super Smash Bros. Melee is without a doubt the most expansive sequel to any fighting game. Nintendo has added 13 additional characters, several offensive and defensive moves, over 20 new multiplayer arenas with unlockable classic levels, single player adventure mode with new 2 1/2d side scrolling levels, nearly 300 Nintendo-character/item trophies, an art gallery mode, an event challenge mode, a survival mode, a camera snap mode, new mini-games, and a several other additions. The single player mode alone has kept me busy for more than 20 hours (which the game officially clocks). Like the original, what makes this game truly shine is the monster multiplayer mode. Four characters, one Nintendo-themed interactive environment full of items and traps, and sheer our madness can eat away the hours like a time worm. The game is irresistible to any Nintendo nostalgic fun, and is definitely one of the best multplayer games ever created.

Cory: Ill leave the general praise that Super Smash Brothers Melee wholeheartedly deserves to my fellow staff members. I have something a bit more specific to talk about. It seems that several publications have reviewed Super Smash Brothers Melee without even playing the game. Ive heard the fighting system referred to as shallow, and some have even ventured to say that no real skill is required to win - since simple button-mashing is apparently all that is required to gain the upper hand. When reading reviews of this caliber, I cant help but gag a little. Throughout my dozens and dozens and dozens of hours experience with the Super Smash Brothers series, I can honestly say that youll be hard-pressed to find a deeper fighting system on the console market today.

The common misconception here revolves around classifying SSBM in the same league as the likes of Tekken and Soul Calibur. These games, despite any gimmicks like sidestepping and jumping a foot into the air, take place largely on a single axis. You move left and right, and try to clobber your opponent with any number of complicated attacks. Super Smash Brothers, however, relies heavily on both horizontal and vertical movement. Call it a free range fighter, if you will. Characters will be consistently maneuvering around each other in a full 360 degrees, attacking from every conceivable angle. This freedom itself could make for a very disorienting experience, but somehow HAL manages to pull it off almost flawlessly. They do it so well, and make it so accessible, that a person who just picked up the controller 5 minutes ago can have a good handle on things.

Here's where the biggest misconception comes into play. Let me make this perfectly clear. Ease of play does NOT equate a shallow system. If you place a newbie against someone who has been practicing with SSBM for months, the slaughter that takes place will be overwhelming. There are so many techniques that require sufficient experience to learn and time that a veteran can easily beat a match against a new player without getting hit a single time. The thing is, the true beauty of the games battle system can often times be hidden beneath the easy-going exterior. If you sit down with this game for a long enough period of time, youll notice how graceful and dynamic the fighting can be. Instead of repeatedly doing Pikachus down-B attack, youll be sidestepping, catching items in the air, reflecting attacks with only your shield, jumping off the walls, and hitting opponents a good 10 times before they manage to hit the ground. HAL has made a masterpiece even better - and watching a battle between two masters unfold is an experience that cannot be matched by any other fighting game on the market. Buy this game. NOW.


Super Smash Bros. was one of the first lower budget titles developed by Nintendo of Japan. The decision came after some of the high-profile titles like Super Mario 64, Zelda: The Ocarina of Time, and Pokemon Stadium significantly staggered the company's release schedule and resources. The idea was to shorten development times and teams, and create "innovative lower profit" software. Ironically, Super Smash Bros. became a million seller in Japan, forcing Nintendo to against original plans and release it world wide after huge demand from marketing groups.

Taking a complete 180, the Super Smash Bros. Melee team is quite bigger than the original team. Using a variety of artists, programmers, designers, and even a CG team.