View in legacy (desktop) mode
The original Kororinpa: Marble Mania for Wii was a simple yet sweet title, nabbing a well-earned spot among the best of Wii's early titles. The premise was simple: roll your ball from point A to point B. The controls were simple: tilt the Wii Remote and the world follows, giving your marble inclines to roll down. But they didn't stop there: Hudson added things like hidden gems in harder-to-reach areas, a handful of gadgets that kept things fresh, and perhaps most impressively for the time, stages that had you not just going back and forth across the floor but up and down the walls as well.

Marble Saga Kororinpa, out soon, follows up on Marble Mania and does it even better. It's bigger by more than 100%, its already near-perfect controls have been perfected, it's got more neat gadgets in the levels, it comes with a suite of customization options for the marble-tweaker ranging from building your own marble to creating your own levels—and yet, it still understands what made its predecessor simply great.

Hudson gave me the opportunity to ask some questions about the game to Osamu Tsuchihashi, development director, and Mike Pepe, marketing director (who, I might add, knows a lot about the game!) 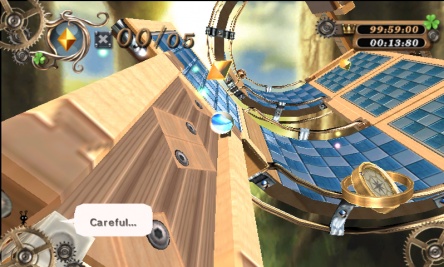 Where did the concept for Kororinpa come from?
Osamu Tsuchihashi, Development Director:When I was a kid, i remember hammering some nails onto a wooden box and playing with it, placing some marbles inside. I'm pretty sure some of the players have a similar memory.

Kororinpa was created with that kind of nostagia in mind, fused together with the new technology that is Wii.
Was it something that started as "let's make a Wii game", or was it a concept that had been around and you found it was a good fit for Wii?
Tsuchihashi:We actually started with the notion of creating a game exclusively for Wii.

There are many features to that platform, but we concentrated solely on the motion sensor aspect and considered exactly how much freedom it provides in terms of angles and overall playability. 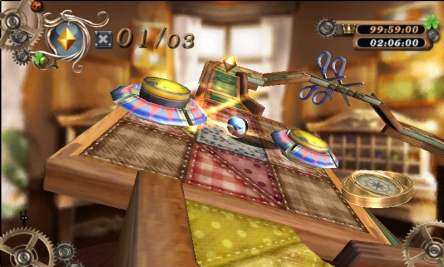 Did motion control limitations make building Kororinpa difficult? I was always impressed with how much flexibility there was in the original, though it seemed there was a limit to how much twisting of the Remote you could do.
Tsuchihashi:This is kind of hard to explain in words, so let me just say that the controls were made as they are as a result of extensive contemplation.
Marble Saga brings a lot to the table. The one thing that surprised me the most actually is that you can make marbles jump, and perhaps you'll need to? What's behind that change?
Tsuchihashi:Actually, as a basic rule, there are no stages where it's mandatory to jump the marble because we thought that this jumping-without-a-button control would prove to be a very advanced skill.

Although, if they wish, players are free to create their own stages that necessitate jumping with the Edit Mode. We made it like this since we thought that the advanced players would want to further enjoy the game by exploring the various physical feats of the ball.

So, the physics are there... now it's up to the players' skills.
view full archive