View in legacy (desktop) mode
In 2003, Kirby and Super Smash Bros. creator Masahiro Sakurai was working at HAL Laboratories on yet another Kirby spinoff game, Kirby Air Ride. In August of that year, he would resign from Nintendo proper after airing his desire to break out of sequel-making. We'd next see Sakurai's handiwork in a collaboration with Q Entertainment on the Nintendo DS—Meteos.

During this period, Sakurai was writing a column for Weekly Famitsu titled "Thinking About Video Games". Volume 2 of this column, titled "Victory and Defeat", saw Sakurai discussing his MO behind one of his biggest sequel-makers—Super Smash Bros. for the Nintendo 64, which spawned GameCube best-seller Super Smash Bros. Melee. (Volume 2 was actually his first proper column; the first was simply an introduction.)

Longtime N-Sider forums member Samer Abbas has translated this column for us in anticipation of the much-anticipated North American release of the next entry in the Smash Bros. series, Super Smash Bros. Brawl. We hope you enjoy this little glimpse into the mind of the master at work behind the series, and maybe appreciate a little more the ideas that went into the game when you finally get your hands on it less than two weeks from now.
Thinking About Video Games: Volume 2: Victory and Defeat
Masahiro Sakurai
Originally published in Weekly Famitsu on April 25, 2003 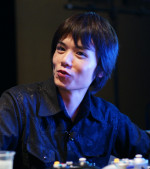 Sakurai at GDC 2008
In my last column, I wrote that I played games every day, but this has since proven false. These days, I have neither the free time nor the days off to play games. I'm in work mode. It's tough, but quite fun as well.

In prehistoric times—actually, a long time before man was even born—competition was born between the creatures of the earth. No matter how culture has developed since, I think that the notions of victory and defeat are engraved in our DNA—they're very strong forces.

Competition is the core of gameplay. Beyond going against each other to determine the winner and loser, competition takes other forms as well: fighting an enemy character, comparing progress in a game with friends, and playing against the high scores and levels of players you don't even know. There is no doubt that competition makes games more engaging, but depending on the person, competition may create different reactions.

An example: a game is built with such depth that it brings to a player's mind memories of defeat. As a game designer, I can't ignore this possibility. If, in a multiplayer fighting game, only the winner feels good and the other challengers get no such feeling, then there is really no joy at all. No matter how people play, I want everyone to be happy! Is this asking for too much?

The original Super Smash Bros.
The game I worked on, Smash Bros., is a fighting game, but keeping in mind such reasoning, I set out to make sure the game did not over-emphasize the notions of victory and defeat. I won't go into too much detail, but the game was built so that if a player is strong in combat, just doing the same thing over and over again won't guarantee they'll always win over their opponents. There is a mechanism of accidents occurring, balanced so that the game's progress and results falter easily. Whether you win or lose, you enjoy a hearty laugh, and move on to the next round. I think this makes quite a good game.

It's not like I think that serious competition is not interesting. It's good to have equals fighting intensely. Yet, I understand quite well the feelings of children who just enjoy hitting a motionless opponent in things like a training mode.

I don't watch sports much and I don't find them particularly exciting. Whichever player or team wins, I always end up thinking "well done, everyone!" I'm not really cheering for or supporting any one team. If there was something like the World Cup going on, I'd be inclined to cheer for Japan and would be excited, but if the opponent was putting his heart into it, I'd feel that both were the same.

When Japan lost in the '98 World Cup, the TV announcers were saying things like "Japan was defeated!" and "Japan was weak!" If you look more closely, you find many factors that could have contributed to the result. But I personally wondered, "doesn't this just mean that the other team fought well?" That's why I designed Smash Bros., which I was working on at the time, with the intent that the loser will applaud the winner.

When you experience defeat, you should not feel down or remorseful, but rather praise your opponent for putting up a good fight. This is the essence of Smash Bros.

Photograph of Masahiro Sakurai from GDC is Â© 2008 Sklathill. Used under the terms of Creative Commons Attribution-Noncommercial 2.0.
view full archive