View in legacy (desktop) mode
Halfway through our conversation, Yoshiro Kimura, clad in a denim jacket, striped shirt, and ballcap, pulls a miniature fire truck from his coat pocket and places it on the table in front of us. Jimmy Soga, XSEED Product Manager (and translator today) is busy relaying to us some information about the music in Little King's Story, but I catch myself drifting away, watching Mr. Kimura roll the little firetruck back and forth on the table. He reaches to the end of the table for a tiny foam rubber critter—Onii, a indigenous character you must fight in the game, as well as a pre-order gift for reserving a copy of LKS—then places him in front of the firetruck, knocks him down, then stands him back up. He hums the first somber bars of Beethoven's fifth symphony. "Da da da daaaaaaa..." 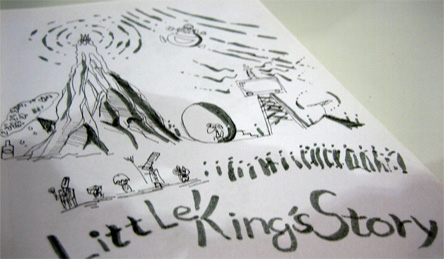 Click on the sketch for a closer look
Fresh off an excellent critical reception in Europe, Little King's Story is being prepared for its US release, tentatively in late July. I ask Kimura, the designer of the game, as our interview begins, did you expect this kind of success?

His response? "Hai." Then silence.

I look at Mr. Soga for a moment with a chuckle, then Kimura-san begins to expound: the game was developed not only for a Japanese audience, of course, and should be accessible for everyone. He travels a lot, he tells us, and has many international friends who love all kinds of games—Little King's Story is an effort to make a game that anyone can enjoy.

But doing so was no easy task. The original prototype for the game took Kimura well over a year with a fairly small five-man team. The team eventually grew during full production to a main developing group of twenty, with twenty to thirty additional people on movie scene creation, and four people doing the music. Despite the size, Kimura is quick to point out that "it's nothing like Assassin's Creed."

A cursory glance at the characters in Story begs the question: "How much did you have to drink when you were designing these guys?" We receive the obvious(?) answer—"a lot."

"I love to drink, but I also love talking, so I invited [our character designer] to my house one Sunday night to drink," Kimura says, "and we just started talking about what kind of style the game might take. We wanted something stylistically in the vein of Animal Crossing, but not with animals... so we decided on vegetables!"

The gameplay in Little King's Story is difficult to describe, but originated as Kimura's desire to make a real-time strategy game for the Wii that used easy controls and worked specifically with the Wii Remote.

He starts humming the Marble Madness main theme. "The music was very catchy, don't you think?" He continues to hum. For this game, because of the kingdom-type setting, they had to go more the route of classical music, he tells us, and so fewer of the catchy, old-style tunes made it into the game.

"He would still call the composer and hum notes into the phone," Soga tells us. (Kimura crashes the firetruck into poor Onii around this time, humming the Beethoven dirge.)

Having recently seen the introduction to the game—Mr. Kimura was running slightly late to the interview—we take the opportunity to comment on the distinctive visual style of the opening cinematic.

"They were inspired by stop-motion," Kimura tells us. He chuckles a bit. From behind the table he continues talking, positioning his hands end to end like he's holding a camera. "Chk, chk, chk," taking imaginary pictures of his firetruck.

"On my weekends I like to sculpt small clay models and take pictures of them," Kimura says. It is obvious that his fascination with stop-motion animation has carried itself into the game. "When there's lots of documents at a meeting I draw pictures on the corners, to make flip animations..."

He reaches down behind him into his bag, pulls out a nice-looking black notebook, and sets it in front of us. "I brought some of my sketches today. I call it 'My Zone Notes.'" Mr. Soga struggles for a minute with the translation, but we just agree that it's "My Zone Notes." Flipping through the pages we see dozens of tiny and detailed sketches from games like Chulip, Rule of Rose, Little King's Story (of course), and even No More Heroes.

Mr. Soga tells us that Kimura-san really loved No More Heroes, and actually did a lot of design work on the game. "Not many people know, but I was working on the game while hidden," Kimura says. I am amused for a moment, unsure whether he really wishes he was a part of the production, or actually worked on the title. A cursory Internet search lists him as a producer for the game, and it's not hard to imagine his design work making it in.

Adorning other pages are several different drawings. One, an almost gruesome image of a Ferris wheel with tiny stick-people being wildly thrown off of it to the bottom where others struggle to catch them. On another, we see a drawing of what looks to be Little Red Riding Hood.

"This is the next game I want to make," Kimura says, pointing to the drawing. Our world exclusive, we joke. 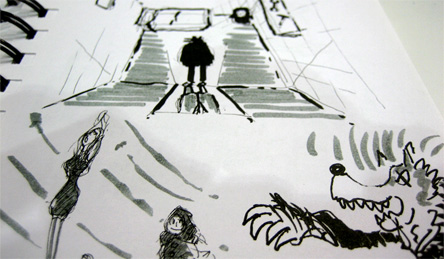 Click on the sketch for a closer look
Though the concept matter of Little King's Story and his drawings are dark, having the characters be really cute allows the exploration of serious concepts in new ways.

We mention Wii Sports Resort, playable on the show floor, and how the game focuses on the look of terror in the Mii faces as they plummet to their watery doom after being knocked off the platforms in swordfights. Kimura laughs. "Just like that!"

"In Little King's Story, you have carefree adults everywhere, there is a kingdom where they are all drinkers, they will become bums if you let them be," he tells us. "It's sort of a counter-part to Assassin's Creed, or Bayonetta."

I take the opportunity to profess my infatuation with Bayonetta. "I want to make Bayonetta next!" he says. "I'm not always happy with just the bright, cute games... next I want to make a darker, underground type game, a change of pace."

As we run out of time for our interview and more reporters are ushered in to see a couple upcoming titles, Kimura-san swipes his firetruck back up from off the table and slides it into his pocket.

"Is it okay if I just sit in the corner?"
view full archive