View in legacy (desktop) mode
It's still simply called Super Mario, and the Tanooki tail on the logo is just the beginning—it's a fusion of a lot of elements from all sorts of games from the Super Mario series, from the fixed-camera viewpoint and of Super Mario Galaxy to the side-scrolling beginning-to-end challenge of Super Mario Bros. 3.

In addition to playing the four levels on the show floor myself, I hung back and watched a number of other showgoers try their luck at it; even with 3D on, the game proves to be pretty challenging to a lot of people. But I think that's not necessarily through fault of design, but rather that the 3D aspect, though Nintendo may disavow its requirement, makes the designers feel a little more free to experiment. 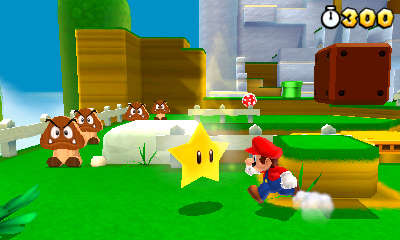 You can actually play with the camera a little bit in Super Mario, be it through taps of the d-pad or the little yellow N64-ish camera control icons on the touch screen. But you don't need to; all the levels are designed so that nothing is hidden by the camera, sticking much more strongly to the sidescroller model than the wide-open 3D worlds of Super Mario 64 or some found in Super Mario Galaxy—there are even flagpoles at the ends of levels.

It's the movesets that invoke Galaxy more. You move about in Super Mario with the slide pad, not just side-to-side but in full 360Â° fashion all over the place. Face buttons dash and jump, but also serve secondary functions such as holding one to hover when you're equipped with the Tanooki suit, as opposed to the rapid-tap action seen in Super Mario Bros. 3. (By the way, about that Tanooki suit: it didn't actually seem possible to take off and fly, although there were a few chances to build up speed on long runways, and the consensus between the boothgoers and attendants I spoke to was that there was no way to turn into a statue, either. The Goombas that sported Tanooki tails weren't flying, either—it seems to be exclusively for drifting.)

A few other moves are available as well. Wall-jumping works in the usual Galaxy fashion. If you pick up a fire flower and become Fire Mario, you can shoot fireballs in the usual non-shaking-a-Wii-Remote fashion. It proves to be kind of difficult to aim in 3D if you're firing from far away, but if your target is in one of the four cardinal directions, all is well. Projectiles also include Koopa shells that are stompable and kickable; these actually seem to home in a little on their intended target, unless it's my imagination. The shoulder buttons will execute butt-stomps and let you roll under areas if you're Super or some other taller version of Mario. Oh, and about those powerups—they follow the traditional sidescroller 1 hit to lose special, 1 hit to lose Super—though as a fun little touch, Mario goes hatless when he has none at all. 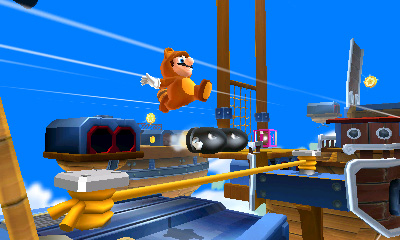 Levels are scattered with a number of interesting little gadgets, many with their roots firmly in Mario elements of the past, but cool nonetheless. There are question-mark blocks that span more than a 1Ã—1 area, being longer or deeper. P-switches expose coins to pick up.

As I said, there were four levels in the demo. The first two were a grassy overworld area and a traditionally blue-tinted underground. (The latter had a really neat gauntlet of swinging spiky balls that swung toward the screen and away—cheap 3D trick, maybe, but I'm easily bought.) The fourth world was airships, with momentary fire jets and Bullet Bills all shooting toward the screen as you navigated your way through. (Yes, you can stomp the Bills as you walk the tightrope.) It ended with a battle against Boom-Boom, who now sports a whirl attack as well as flying around the room as a shell—still three stomps to take him out, though. 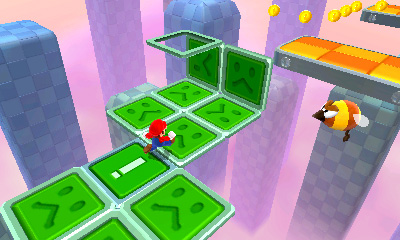 It was the third world I really loved, though. Giant exclamation-point switches activated a series of tiles that would flip ahead of you in a set pattern and eventually fall away behind you; skillful platforming around spiky blocks, bricks as well as off and on moving platforms was required to get from the beginning of these to the end. There was even one section that involved setting two of them off very close to each other so you could hop up one and onto the other when it arrived to collect one of each world's three Star Coins. These coins don't give you anything in the demo other than the satisfaction of a job well done, by the way; but it seems pretty plausible that in the final product, they'll unlock something, much as they have in previous games.

I really enjoyed the short tour through four levels of a game that seems like it will probably end up with a traditional x-y structure in the end. I have to say, though, from the team that developed Super Mario Galaxy and its sequel, I was expecting something a little less traditional—though a lot of that might show its face in the final product, particularly as it seemed the levels chosen were already frustrating some less-experienced players and they may not have wanted to give showgoers the wrong impression. Regardless, even if it's not quite as special as Galaxy was, Super Mario is shaping up to be an interesting title and a worthy addition to the 3DS' library.
view full archive