View in legacy (desktop) mode
So I'm in Seattle this week for An Event Apart, a web-dudes conference, and it seemed to me like a perfect occasion to exploit the camera on my brand spanking new 3DS. People like taking photos on trips, don't they? And photos in TRIPLE DEE? Well golly that sounds like a fabulous idea.

Too bad the camera is just awful. Embarrassingly terrible, really. It's not even because the resolution (VGA, 640x480) of the photos is so low, it's just the raw image quality itself. Grainy and incapable of reproducing any kind of detail at a distance. Did you know you can see mountains on the horizon across the water from the Bay Area? You wouldn't know it from any of the shots I took, all that's back there as far as the 3DS is concerned is a white blur. It's good enough if you're taking photos for 3DS applications and games, but it is just not up to the task of taking photos for the sake of wanting nice photos. 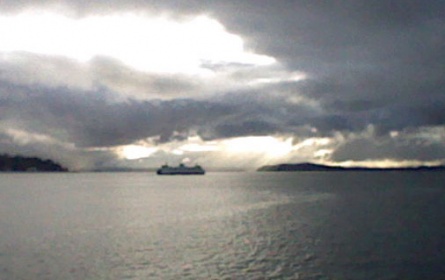 That's a boat, not a submarine
This was originally going to be a rant about exactly that, but wouldn't you know it, I stumbled upon something I wasn't expecting: a whole panel full of photo-manipulation lenses and filters. Now these don't solve the problem outright, but they certainly—in the right circumstances—take some of the edge off. Further on I'll show some images that illustrate exactly what you can expect.

Let's start with the basics. As your delightful parrot guide is kind enough to actually tell you, the 3DS stores its photos in the "DCIM" folder on the SD card, and the filenames are in the format HNI_XXX.JPG for 2D images, and HNI_XXX.MPO for 3D ones. You can yank 'em out and do with them as you please, though you'll need some sort of special software to process those MPO ones. I'm really only interested in the 2D photos for the purposes of this article though.

Particularly astute readers might have taken pause when I mentioned the VGA photo resolution earlier. "Why Cory, that's not the same dimension as the 3DS screen!" Nice catch, smartass. While the photos are indeed taken and stored in that size, they're cropped when viewed on the actual 3DS screens, be it fullscreen on the top or as a thumbail on the bottom. 80 pixels are cut each from the top and bottom, and you lose another 106-ish pixels horizontally since the images are overlapped and askew to produce the 3D effect. In 2D mode you're basically seeing a 534x320 pixel image that's then scaled down to the 3DS's working resolution of 400x240.

The photo manipulation options we'll be looking at are available only via the actual "Nintendo 3DS Camera" application, not the quick-and-dirty viewfinder you get by tapping L or R in the Home menu. In the app you'll have a red-capped lever on the bottom screen that will produce some additional options, and its the first one, "camera mode," that has all the goodies.

We'll use this as our starting point: 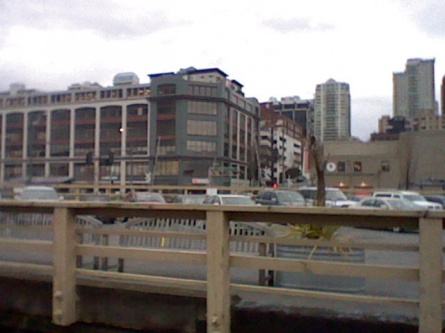 Click to check out the full-size version
Kind of blurry and washed out (I'm sure Seattle's perpetual state of overcast malaise is at least partially to blame), but not overtly terrible.

While you've got a shot lined up in your viewfinder with the "camera mode" dialog showing, the "manual controls" button will give you the option to dynamically alter the sharpness, contrast, and brightness of the image with three sliders. (There's also a toggle between various film modes like black & white, negative, and sepia, but those are fairly self-explanatory.)

So let's see how the sharpness looks first: 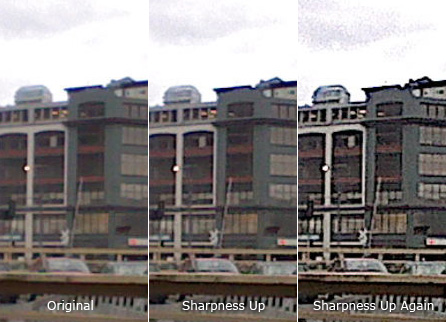 The second shot does indeed provide some additional detail, but the sharpness gauge is one of clear diminishing returns, as going too high just turns the photo into some sort of dystopian nightmare-scape.

Next we'll look at contrast: 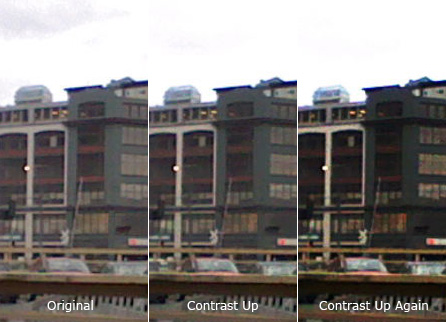 Again, a restrained hand seems to work best here, as while you can certainly give more oomph to your colors as you work up the gauge, you lose almost all detail in the lighter areas of the image.

In addition to the brightness slider, the "camera mode" dialog has some more playful filters, like one where you can blow on the microphone to toss bubbles or stars or various nonsense all over the image, and another that purports to add a "hazy, dreamlike quality" to photos. 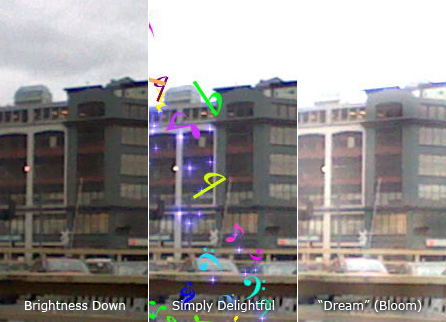 In the end, your best bet will likely be some combination of the three gauges, depending upon your circumstances. Maybe a tiny bit of contrast and sharpness, and a little less brightness, will move photos into solid "B-" territory.

There's one lens that actually makes a shocking difference, though, in the right situations: the low light lens. Let's have a look: 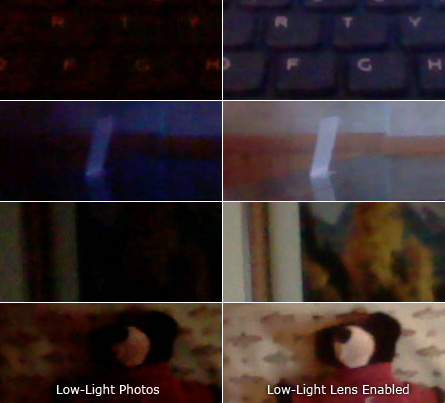 Pretty astonishing, really. I'm not sure what kind of wizardry they've got powering it, but I like it. Unrelated: after I took that teddy bear photo, the parrot asked me, "Have your 3D photos of objects like toys or teddy bears been turning out well?" I'll be chalking that up to coincidence but I can't say I wasn't a little bit unsettled by his apparent omniscience.

I suppose I'd be remiss to not talk a bit about the photo-management options you've got in there, too. Your main browsing interface has zoom options similar to the 3DS Home Menu, where the thumbnails increase or decrease in size, but it only toggles between three zoom levels, yielding 2, 3, and 4-high columns. It's very similar functionally to the DSi camera app, but now you can tap on the "day" tiles before each group to collapse the day entirely, which makes things much more browsable if you've got tons of photos per day.

When you view an individual photo you can scribble all sorts of nonsense on it, with tools ranging from colored or rainbow pens, various stamps, and "3D" tools that raise or lower parts of the image. Interestingly, when you choose to edit and then re-save a photo in this fashion, the copy it makes is physically cropped on the Y axis, permanently altering your image dimensions to 640x320. It doesn't cut anything off the sides, but since those sides aren't on the screen since they're overlapping to produce the 3D effect, your final image will have odd pillarboxes where there are no drawing effects applied.

Click to check out the full-size version
Finally there's the slideshow function which it seems impossible to have a photo app without. Does anyone really use slideshows? On a mobile device, in particular? Anyway you can do the usual things, choose music, speed, panning, etc. The catch is that the shows are based on "themes" that our lovely parrot says he'll do his best to compose. For example, you can have a slideshow of only photos that include Miis, or only game photos. It even lets you just show photos of people, or specifically photos of men or women. Those people options were grayed out until I took a photo of myself, so it's clearly doing this procedurally somehow. At least I was classified correctly, and not as a "male infant" as Face Raiders was so gracious to coin me. "Thanks."

I was pretty surprised to find all of those photo-quality options in there—the DSi's camera app was pretty barren in that regard, so it's a nice upgrade. While they're certainly appreciated, particularly the low light lens, they can't really completely make up for the poor image quality you get from the camera overall. It'll work fine for casual fare here and there, and it's enough for game applications I think, just don't carry it in lieu of an actual camera if you've got designs on a quality photographic record of things. It's a shame, since it's sure to be the first widespread 3D camera, and it's making a pretty poor first impression.
view full archive