View in legacy (desktop) mode
We here at N-Sider are privileged to have a rich community around our site and our forums, and we're proud to count Max Nichols, webmaster of Zelda Legends, among the members of that community. Max attended the Video Games Live show in recent months, yielding this in-depth writeup and interview that we're proud to share with you here. We sincerely hope you enjoy it!
I first encountered video game music twelve years ago, while playing a little game called The Legend of Zelda: Link's Awakening. The archaic chiptunes of the Game Boy spoke of adventure and heroism, sang of mystical worlds and strange vistas, free for me to explore. And thus I fell in love with game music, for the role it plays in these immersive experiences we all love. At the time I was a strange one; nobody listened to video game music, and through my early teenage years I got all manner of odd looks. I made a few converts, here and there, but I never expected game music to take off or turn into something that could be appreciated by large audiences.

Thankfully, times change. This past March found me and my girlfriend in Woolsey Hall at Yale University, a regal structure that is home to the Yale Symphony Orchestra and a famous 3-story pipe organ. It was a beautiful place, as classical as they come, complete with pillars, murals, and everything else you might associate with a prestigious symphony auditorium. And it was filled with gamers. Filled not only with gamers, but their families, parents bringing their gamer children, relatives of the musicians, and fans of the orchestra in general. Thousands of us, there to witness a spectacular symphonic show celebrating the music of video games.

Video Games Live was founded by renowned gaming composers Tommy Tallarico and Jack Wall. The first of its kind, it tours the world, partnering with different symphonies to present orchestrated game music from a variety of games. The main attraction is the live symphony playing the music, but their shows are spiced up with an enormous screen that displays footage of the game in question. Tallarico himself is a born showman; the audience is not just sitting there watching and listening, he brings people on stage, he tells jokes, and in general he interacts with the crowd to make us feel like participants.

Prior to every concert there is a pre-show festival. Nothing too spectacular, basically just a chance for everyone to mingle, play in a Guitar Hero tournament, enter some drawings, and get pictures taken with some of the cosplayers. The pre-show festival culminates in a cosplay contest, with the winner chosen via audience applause at the beginning of the show. The winner while I was there was a little boy dressed up as Baby Luigi. 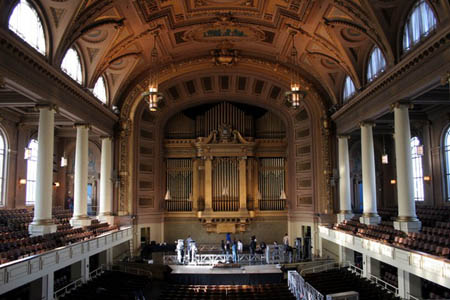 The show started off with an eight minute medley of classic gaming tunes, ranging from Duck Hunt and Tetris to Galaga and even Pong, of all things. The announcement that the show would begin with Pong left most of us scratching our heads, seeing as Pong had no music, but they pulled through with edited footage of the game where the bleeps and bloops of the bouncing ball acted as the intro to the medley. I'm ashamed to admit that I only recognized about half of the games represented here, which illustrates the lengths they went to include a nice variety.

Next we were treated to a pre-recorded video of Hideo Kojima, who told us how he wished he could be there, and then went on to introduce the music of Metal Gear Solid. I've never played the games, so I couldn't tell you exactly which tracks were represented, but I definitely heard the main theme. We also had someone sneaking around the stage in a box, which earned some laughter.

God of War music came next. Of everything at the show, I found this to be the least interesting piece, because I've never cared for God of War's music. As soon as it was over and the music quieted down, Tallarico popped out of the box that he had been hiding in since the Metal Gear Solid piece and launched into the next phase of the show: Space Invaders. He asked for a volunteer from the crowd, and got the biggest response I've ever seen to such a request. The lucky volunteer came up, put on a shirt with some sort of motion-sensing technology, and took a wireless arcade controller. He then proceeded to play Space Invaders on the projection screen. He controlled his ship by moving back and forth across the stage, and fired with his controller. While he did so, the orchestra played the music for the game on the fly. There were cash prizes ready to be given out, but the volunteer didn't quite earn any of them. I found it mind blowing that simply seeing someone play Space Invaders could earn wild clapping and cheering. Of course, they were cheering for Space Invaders more than the guy playing it, which really goes to show how deeply ingrained games are in our culture.

At this point Jack Wall, the co-producer and conductor of the orchestra, took center stage to talk about the next part of the show: music from the Myst series. Jack talked about how the original Myst inspired him, and how honored he was when he was given the chance to compose the music of Myst 3 and 4. This was where the game footage on the screen really began to shine. It was nicely choreographed to match the music they were playing, and they chose some scenes with incredible visuals to match. I never really noticed the music back when I first played Myst and Riven, but they managed to make a great show out of it. This was also the first time that the choir really had to do much work, and they did their job reasonably well.

I had mixed feelings about the next game on display. Not because it was lacking in quality, but because it was Medal of Honor music played with actual footage from World War II. It was a very moving piece, mostly illustrating the sadness of the war with footage of families saying goodbye and soldiers crying. Their reasons for including it in the concert were obvious: to show that video games are capable of true emotional depth and of exploring mature subjects, and they certainly succeeded. I was a bit apprehensive though, and was slightly uncomfortable with the footage at first. I was there to have fun, not to listen to sad music and watch crying families. Curse my overactive empathy! But by the end of the section I was convinced that they had made the right move, and I'm glad that they did it. It certainly made an impact on the audience, heh.

After this came "Baba Yetu", the main theme from Civilization IV. If you haven't heard it, it's worth checking out; the closest comparison I can think of is The Lion King. The original version of the song has African drums and singing in Swahili. The African drums were lost in translation to the orchestra format, but they actually had Ron Ragin, the original singer, there to sing it for us. The whole piece was pretty laidback and cool, with the opening cutscene from Civilization IV playing throughout, and I really enjoyed it. One of the big surprises of the show, and I sought out the track as soon as I got home.

For whatever reason, Final Fantasy 8's "Liberi Fatali" is always hailed as one of the greatest pieces of gaming music. I'm not too fond of it myself, but I'm in the minority, so it came up next. Unfortunately, Square Enix doesn't allow any of the game music symphonies to show footage from their games. It's because they want to retain exclusive rights for their own shows, if I'm not mistaken. To make up for it, they outdid themselves with the lightshow for this track, using a huge variety of colors and flashes in sync with the music. Even for someone like me, who thinks Liberi Fatali is overrated, it was enjoyable.

Luckily, Liberi Fatali didn't last long, and what came next made up for it tenfold: the Zelda theme. We got another prerecorded introduction, this time from Koji Kondo, before the music started and we were treated to a montage of various Zelda games. After the first thirty seconds or so it settled exclusively onto Twilight Princess footage. Oddly, all of it was taken directly from the trailers for the game; they must not have the rights to show new footage, because I can't think of any other reason why they'd stick to pre-release trailers. Regardless, the music was great: the Zelda theme on full orchestra. They didn't do anything daring with the arrangement, but that suited me just fine.
view full archive